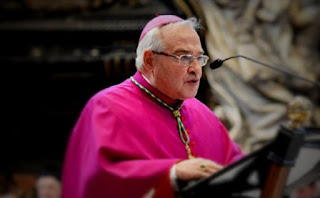 (Rome) The highlight of the 4th International Pilgrimage Summorum Pontificum was  the Pontifical Mass in the Immemorial Mass of All Ages at the grave of the apostle Peter  in St. Peter's Basilica. The celebrant was Bishop Juan Rodolfo Laise OFMCap, Emeritus of San Luis in Argentina. The sermon was by Msgr. Luigi Negri, Archbishop of Ferrara-Comacchio and Titular Prelate of Pomposa. The Archbishop of Ferrara belongs, because of his clear language,  authentic style and his willingness not to play favorites is one of the exceptional personalities in the European episcopate. His episcopal chair was therefore sawed violently last with sharp shots, as it was assumed that he wished for the imminent death of Pope Francis.
In his speech without notes, he went to the twofold position of the Church in its evangelizing mission to humanity. It  should be seized by what it's received, and Christianize. It must at the same time keep away from  worldliness and resolutely reject what is contrary to the teachings of Christ, however.
As Archbishop Negri held his sermon, found a few meters away, there  was great anxiety about the vote on the final report of the Family Synod. The Synod Fathers also included Cardinal Carlo Caffarra who originally should have given the sermon, which was then given by  Archbishop Ferrara  because of the scheduling conflict.

Our Lady of Good Success 1 - 2016: Dawn Procession in Quito https://www.youtube.com/watch?v=ZNu1uEBS-TM