Edit: Michael Hichborn sent this to us last week. Better late than never. I would have thought that after Dale Fushek that people would have cooled on this sort of thing.
The following "explanation" of the liturgical banality appeared on the pastor's Facebook page.
Here is the link: https://www.facebook.com/msgrjamie.gigantiello?fref=ts
God bless, 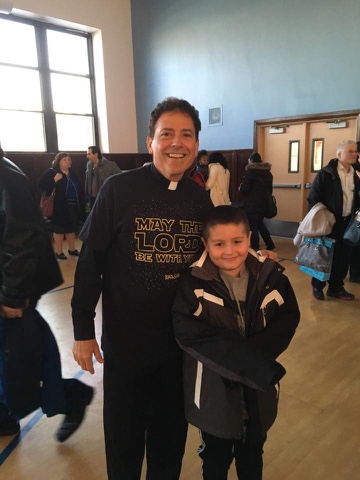 I just got this statement ostensibly from St. Bernard of Clarivaux Church posted to the comments section of my article on the matter:"At the parish of St. Bernard, we celebrate the Family Mass every Sunday at 11:30AM. At this liturgy, the children of the parish are invited to processes in with the priest and sit in the sanctuary until the conclusion of the Homily, at which point they return to their parents in the pews for the Liturgy of the Eucharist. At the Family Mass, different scenes taken from the popular culture and the daily experience of the children are used to assist the celebrant relay the message of that week’s Gospel to the children. The Family Mass is occasionally followed with, upon the conclusion of Mass, a social for the families held in the school auditorium or in the parish garden. Examples of such Family Masses include All Saints Day when the children dress in the costume of their favorite saint, Pumpkin Patch Sunday, Ice Cream Sunday Sunday, the Backpack Blessing Sunday which is held the week school begins, Monthly Class Mass, and other which are held for our children and families throughout the year.In the instance of Star Wars, this is a very popular film series among children and their parents. The intention of this Mass is to be a way to enhance the children’s understanding of the difference between good and evil and the ultimate triumph of good over evil. The children were invited to dress in costumes of characters from Star Wars and participate in the same way they normally do at each Family Mass. Upon the conclusion of the Mass, refreshments will be provided for the families in the school auditorium, along with appearances by some of the characters from the movie in the auditorium.At St. Bernard Parish, we are always looking for ways to engage our young people and instruct them in the ways of our Catholic faith and tradition."
Posted by Tancred at 3:44 PM

I feel exactly the same way about these efforts as I have always felt about the Holy Mass split along ethnic lines, for "Vietnamese Day" etc. Badly. Despite the no doubt good intentions, this type of thing sends the message to children that the Holy Mass is just not good enough, so we will "improve it". I know they mean well, but nothing should be used to engage children if they cannot be engaged enough by the reality of the Creator of the entire Universe deigning to come to them in the Holy Eucharist. Outside of the Holy Mass? Outstanding.

what a load of rubbish.
shame shame shame, priest.
you will have to answer to your boss one day (soon) for this.

congratulations, blind shepherd, you are continuing to lead the sheep off the cliff into the abyss, in the fine post conciliar tradition (sic) of raising very poorly catechized catholics, who have absolutely no chance of getting to know the truth of their faith, so that, barring a miracle where they somehow discover the latin mass and the real tradition of the church, the few who actually remain catholic when adult think that there's nothing wrong with sodomy, communion whilst in the state of public adultery, gaia creation worship aka "global warming", religious indifferentism aka ecumenism, or heretical sects like the neocatecumenals.

*** the catechism *** is the way you should
"instruct them in the ways of our Catholic faith and tradition",
not by "different scenes taken from the popular culture".

Well stated. They should not be in the Sanctuary anyway.

So what did they do with the kids who came dressed as the bad guys?
Is every popular movie is going to get it's own "mass" now so they can connect with the children and their parents?
The only "tradition" being followed is the Novus Ordo Bastardised mass.
I get upset because people think this is the Catholic Church when in reality it is just another Protestant sect.
When you come to terms with that, then "Star Wars" mass makes sense.

The intention of this Mass is to be a way to enhance the children’s understanding of the difference between good and evil and the ultimate triumph of good over evil.

In Revenge of the Sith Obi-Wan Kenobi can be heard saying, "Only a Sith deals in absolutes." Perhaps the morality on display in STAR WARS is not quite so congruent with Catholic teaching as the good pastor thinks.

"Luke, you're going to find that many of the truths we cling to depend greatly on our own point of view." - Obi-Wan Kenobi

It's amazing people are outraged at this story.50 year's later and people still think the V2 Sect is the Catholic Church.

Perhaps I am a bit "over the top" in the way that I view incorporating movie themes into the Holy Mass, but it seems to me that Hollywood should be the last place that Catholics look for lessons regarding good vs. evil.
The pervasive influence of Hollywood and it's tribe has done much in secularizing ( some would say, demonizing ) the United States.
The insidious and sometimes blatant, satanic evil that movies propagate is being done with intention. The perfidy that characterizes the powers that be in Hollywood is not new. It has been with us since the time of Christ. The Holy Church has warned us of this throughout the centuries.
In charity, this priest is terribly misguided.
This is discouraging but they will not win. The Lord Jesus Christ will win.