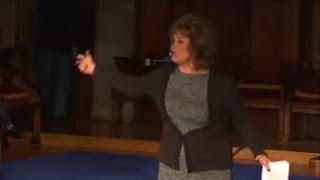 (Madrid) Hostility to Christianity has many faces and there are many ways to persecute Catholics. That is mockery since the Protestant Revolt and  the French Revolution's social exclusion. "It's called, 'freedom of expression,' thus justifying the worst obscenities of blasphemy," so says Corrispondenza Romana . The poem "Our Mother" falls in this category, which  last Monday was the winner of the literary competition, Premio Ciudad de Barcelona de Poesia, presented by the city of Barcelona at an award ceremony.

HERE YOU CAN ADVERTISE »
Dolores Miquel (image) of Lleida in Catalonia writes poetry in order, in her own words, "to provoke". This is in order to attract attention so that she continually incites provocation. On Monday she introduced a distortion of the Our Father, which she called "Our Mother" in order to set a feminist tone:  "Hallowed be your c***, thy will be done in our womb" and called for abortion: "Do not let the bastards abort love and promote war ".

"This has deeply offended me. With Catholics anything is always allowed"

Alberto Fernández Diaz, the group spokesman of the Spanish Popular Party left the event in the City Hall of Barcelona. "What I have heard has deeply offended me," said the PP representative. Then he wrote on the social networks: "It is a matter of respect. With the Catholics anything always  allowed, everything, but at the same they reject this when the same understanding of "freedom" is used of others who ridicule, for example,  Islam."
. Even the Bishop of Terrassa, Mgr José Ángel Saiz, left no doubt: "This poem is undoubtedly blasphemous. How long will you still abuse the patience of the Catholics?"
The former Mayor of Barcelona, ​​Xavier Trias, described the sad incident as an "institutional failure" because it took place during an official ceremony of the city administration. Trias was from 2011-2015 c Mayor of Barcelona, and ​​belongs to  the liberal-conservative, national Catalan  Democratic Convergence of Catalonia CDC party.


Since the local elections of 2015,  Ada Colau is Mayor of Barcelona. The leftist activist belongs to a newly founded  opposition coalition of the left-wing populist Podemos party, Greens and Left-Catalan nationalists. The alliance won 25 percent of the vote and eleven of 41 mandates. With the support of other left parties (Left nationalists ERC, the Catalan PSOE offshoot PSC and the radical left CUP) Colau was elected for mayor by a mere 21.
The nun Lucia Caram, who otherwise contains good relationships with leftist Catalan nationalists, said she was "surprised and disappointed" about the "superficiality and hostility to the Church," from Ada Colau "and her Muchachos".

The PP party spokesman Fernandez has called for the resignation of all those who have "offended with such adulterations of the 'Lord's Prayer' and contempt for the religious feelings and convictions of others in the name of a completely distorted idea of freedom of speech."
Text: Giuseppe Nardi
Picture: Youtube / El Confidencial (screenshots)
Trans: Tancred vekron99@hotmail.com
Link to Katholisches...
AMDG
Posted by Tancred at 4:45 AM

Mgr José Ángel Saiz, said: "This poem is undoubtedly blasphemous. How long will you still abuse the patience of the Catholics?" It will continue until Catholics take to the streets and demand it stop. Vote against those who hate us; do not buy from those who hate us, etc.

"Hallowed be your c***, thy will be done in our womb" and called for abortion: "Do not let the bastards abort love and promote war ".

This is Satanic pure and simple (whose will be done in their womb?). Fifty+% of the babies aborted are female. Murdering babies is not "war" but "love".

Unfortunately, selfish nero monster is no more selfish or nero monster than Trannie Frannie, Ravasi, Danneels, Vinegar & Smoke, and all the other putrid perverts running the Catholic Church. How long will Catholics have patience w/them? Unfortunately, today self-called Catholics more resemble the nero-monsters than they do Catholics.

This is a call for all of us to cancel any trips planned to Barcelona for the foreseeable future until they officially and in a public way denounce what has happened and apologise to Catholics like they would if it happened to others of different faiths.

Ps. please pass on to others.

Really sick of these stories. Time to take action.

PPS. Don't forget to write or email your Spanish embassy to register your protest at this bigoted poem.

Whats poetic about language fit for a sewer ? its amazing she didn't target the Hail Mary ,it must have been to difficult for her talented tongue .lets hope she enjoys her moment of glory ,there'll be a heavy price to pay for it.

While blasphemy is by far the worst crime of this woman - and our society, we have failed in stopping this type of foul language, and even use it ourselves in more profane fashion.

If we could clean up society, this sort of display would be unthinkable, let alone common.

Furthermore, she belongs to the party supported by a rabble-rousing Argentinian Dominican "nun", Lucia Caram, who is a political agitator of the Left in Barcelona (even though she is not a Spaniard)---a nun publicly known in the Spanish press as "La monja cojonera" (or "the nun with great balls"), the very one that Bergoglio urged to make more "lios" (or upheavals). Two peas in the same Marxist pod. Romulus

"Two peas in the same Marxist pod". Is that a Freudian euphemism?