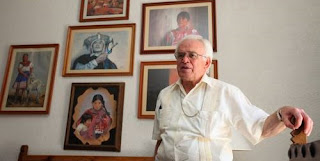 The late Bishop Livieres Plano left a flourishing diocese. His diocese, with just one-tenth of the Catholics of Paraguay, had three times as many seminarians as all other dioceses together. Which is a - not only - Latin American theme of vocations - and the shortage of priests. Argentina native went to Rome in September 2014  and  was deposed during his absence from his diocese by Pope Francis. In Ciudad del Este, it is said that he was downright "lured" to Rome, because once there the bishop was simply allowed to stand before closed doors. The reason for the dismissal was given that he had disrupted the community of the Paraguayan Bishops. Despite his repeated entreaties, Pope Francis refused a discussion.
Quite different is the case Saltillo.  Bishop Raul Vera is invited for next February by Pope Francis, where during a pastoral visit to Mexico,  he will meet privately, wrote InfoVaticana.  To be precise, it is a semi-private meeting at which only a small group of selected journalists and bishops will participate, a total of 20 people. And Bishop Raul Vera will be one of the elect.
Text: Giuseppe Nardi
Images: Wikicommons / InfoVaticana / El Gatopardo (Screenshot)
Trans: Tancred vekron99@hotmail.com
Link to Katholisches...
AMDG
Posted by Tancred at 10:28 AM

These notorious homo-Dominicans; along with the homo-Jesuits are decimating the Church. They openly flaunt their evil, knowing that the present Authority in the Church either will not, or cannot move against them.

These Judas bishops and priests are true destroyers.

Barona, too true. And, unfortunately for you and me, Carmelites are not exempt, nor Franciscans, Benedictines, or diocesan priests.

YEAH, BUTT. On the "Feast of St. Francis De Sales" the Institute of Christ the King Constitutions rec'd definite approval!!!! Rorate has the (not) exclusive. Wonder what pervert will be appointed bishop.

Read all about it:
http://www.mostholyfamilymonastery.com/news/schoolgirl-12-is-raped-on-the-street-by-a-pervert-who-was-pretending-to-be-a-police-officer-who-said-he-had-to-search-her/#.Vqvc1LIrJUQ

This reminds me of the disney cartoon The Little Mermaid's song sung by evil octopus witch Ursula–Poor Unfortunate Souls. Pathetic souls who want God to witness what He expresses forbids.

What he is really saying is the Word of God as revealed in Scripture is insane ,if he thinks so let him leave .

If this is true then Schism is about to befall the Church.

I thought former Master General and current Pontifical J&P Council consultant Timothy Radcliffe was the "evil Dominican head of the gay lobby"; otherwise, move over Tim, because you've got competition.

Good heavens... When is your dullwitted racketeer run hoax pretending to be a church going to recognize that you've failed to eradicate us. Screw you and Burke too.

None of the major orders are exempt.

The Church would be better off eradicating sin, but that's not going to happen.

Someone forward this Article to cardinal Napier.sadly he insisted there is no evidence of Wrongdoing for this Apostate Vera fellow.

Exactly, Anonymous above. What did the courageous and "saintly" Pope John Paul and the "reforming" Benedict do about these miscreants? Nothing at all. Were it not for John Paul rescuing Bergoglio from a well-deserved marginalization and obscurity he would not be having the time of his life taking the sledge hammer to the Catholic Faith. Let us look to and denounce the roots of the present evil. RC

Homosexuality is criminal, and nobody has a right to be that way. It is for reason that unrepentant gays burn in hell forever. They deserve it.