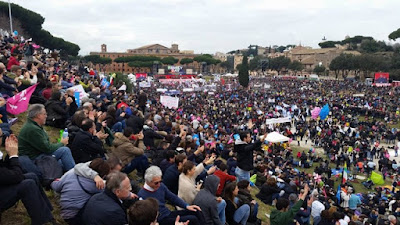 Edit: despite the indifference of the Vatican, if not outright hostility, this event in defense of the family is turning out to be an enormous success which is sure to dismay those forces of intransigent degeneracy.  Let the adocates of gender ideology in this papacy tremble!

Organizers and some in the Catholic media are reporting two million participating families, people, who do not want the "gay marriage" bill set to debate this week.

Check out the photo collage:

It is wonderful. How many are good Cardinals and Bishops who took part in it. PF must get the message that faithful in Rome and Italy are against him and do no support him rather condemn his destructive ways. May the good Lord forgive us our sins and save us from this PF. THE WORLD APPRECIATES AND ADMIRES YOU FAITHFUL ITALIANS.

Why not 5 MIllions next time that your Govt. gives up its legislation.

I've read the reports of this great day from many secular websites. While the organizers of Family Day claim that 2 million came out in defense of the family, I have read numbers from 500,000, to as low as just "tens of thousands"
Either the pro-gay media and pro-gay elements in the Catholic Church in the Vatican are trying to downplay the success of Family Day, or there actually were not 2 million....or anywhere near it.

Someone is being inaccurate. I'd like to think it's the former, and not the later :)

As an aside, I read that while Family Day was going on, there was a Holy Year of Mercy audience and event in St. Peter's, but that much fewer showed up than they anticipated.
How underhanded/low can they go? What were they trying to do, draw faithful Catholics away from Family Day with another nutjob light show on the façade of St.Peter's ,rock concert, or liberal anti-Catholic tradition tongue lashing from Francis and company?
Damian Malliapalli

I was there and it truly was a huge success. However they will probably pass the obscene law. The politicians (especially on the left) don't have the fear of God in their hearts. And they don't really care about the masses of families and individuals (not all at the event) who represent the healthy reality that still remains in Italy. Unless Our Lady has something to do with blocking it (a miracle! - there have been precedents and there were lots of rosaries and Holy Masses for this event), but only through some mysterious Divine intervention will the monstrous thing be blocked.

The numbers: I don't know where they got the 2 million count. I'd say it could have been a million or thereabouts. The Circo Massimo and the roads leading into it were crammed with people. The number is important relatively so, but what was wonderful was the serene spirit and the sense of belonging to a common cause among the demonstrators. Truly there was joy and serenity (not one negative incident was reported), but the people voiced a loud and adamant NO to this destruction of the family.

The speakers were all very good, and any political insinuations were kept to a minimum. There was no overt political ranting and no politicians pushing their parties, although there were many of them present in the crowd.

It was truly a wonderful demonstration of civility and human dignity which stood firm in its refusal of an iniquitous and vile law. When they pass it, it will really be the end not only for Italy, but for us all.

Sad, very sad, was the absence of bishops and Church hierarchy. And don’t let me get started on Pope Francis who by his silence made clear whose side he is on and it is not Jesus Christ’s or his followers for sure. Some Vicar if Christ. What an utter disgrace…

No matter, we continue praying to the Most Holy Virgin that She will still save Italy. After all there are hundreds of sanctuaries dedicated to Her our only hope all over Italy. In Her motherly care, may She obtain a great gift of real mercy for the Italian people from Her Beloved Son…
Barbara

It is up to the true faithful laity to proclaim the truth of life, family, and sexuality since our holy Church has been infiltrated by unworthy men. One cannot serve two masters...the faithful laity who know the truth must follow The Truth and not the ones who are compromising with the immoral world.

I have read on both blogs and news websites that there is real and growing outrange in Italy, and Rome in particular, against Pope Francis for not standing strongly with those at the rally and for traditional family. To say he is disliked is being polite.
I think after this, when Francis and his people showed what side they were really on, the people in Rome at least will be against him(Francis)
I have also read (I know it only 2 months into FrancisHoly Year of Mercy..ugh...but already it's being called a flop....and a big one.
Damian Malliapalli