Stray Dog by the Lord 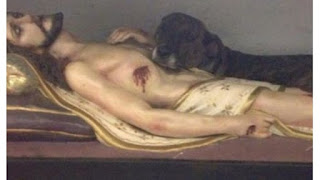 (Brasilia) A photo being passed around in social networking sites has given rise to some emotions in the past few days. A Brazilian pastor published the picture of a stray dog on his Facebook page, "what is commonly called a stray dog ​​here," said the pastor.

The dog somehow got into the parish church of the Brazilian community Aguas de Santa Barbara on the Second Sunday of Advent. In the church there is a replica of the tomb of Christ with a life-size sculpture of the Lord lying in the grave. The dog lay down directly on the figure of Christ and remained there motionless throughout the celebration of Mass.

"It seemed as if he felt safe with Jesus, and as if he would protect the Lord. A moving scene, "Msgr. Jose Edmilson Zanin described the unusual event, "At the sight of this ownerless animal that lives on the street, but found a safe refuge here in the Lord, I was moved with compassion, and I thought: Why can't even we humans, guided by this certainty, always find safety and protection with Jesus." The dog behaved very calmly, without moving around in the Church during the sacred liturgy. "What lessons can animals give us," exclaimed Msgr. Zanin. Meanwhile, several people have reported that they wish to raise the animal.

Aguas de Santa Barbara has more than 5,000 inhabitants. The community is located in the state of Sao Paulo and is part of the Archdiocese of Botucatu.

Email ThisBlogThis!Share to TwitterShare to FacebookShare to Pinterest
Labels: Brazil

Awaiting the sentiment of: "See, animals have souls too! This dog is going to heaven, like St. Guinefort!"

The name animal comes from the greek, "anima," which means soul with the diminutive "oula".

But not immortal ones and certainly not rational.

The original story mentioned that the priest fed and watered the dog, so it is no accident that the animal hung around the church. Also, the priest said that at the Consecration,he looked into the dog's eyes and saw God! If the priest felt compassion for this animal, he should have fed him and watered him in his house, and offered the dog his own bed instead of allowing him into the church.

You never see the author in His work?

A beautiful photo regardless. How a culture treats it's dogs and cats, it's creatures, is a sure sign of civility. Where dogs and cats are not treated well, people should beware. There should not generally be dogs wandering the streets as "stray dogs". Every dog deserves a home or to be assisted by a municipal department to be housed and treated humanely.

I forgot to add, these are indeed bizarre times. Often one can notice more "humanity" in dogs than one might see from many human beings. It has become quite noticeable.

Our priest recently stated at the birth of our Lord,animals kept him warm by breathing on him in the manger.
He then asked "when we sin we pierce the Lord again & again.So,are we gonna allow animals to be smarter than us?They at least offered him comfort."

"You never see the author in His work?"

All Catholic dogs go to Heaven.

Our own priest, who offers the Missa Cantata every Sunday and the Low Mass every weekday, and who is the diocesan exorcist to boot, harbors otherwise homeless dogs and cats, of which our city has many.

Dogs have long been a symbol of fidelity and loyality .

Sean, are you trying to be sarcastic? All animals go to Heaven, not just dogs. I have no problem giving out my name: it's Rosemary Gremillion and I live in Louisiana. Perhaps, you need to reread the life stories of St. Francis of Asissi(I can never remember how to spell "Asissi") and St. Martin DePorres. There are also several other saints who had special relationahips with animals. God created animals. Perhaps you would do well to contemplate that fact as well.

There's a real gnostic streak at work here I think that regards creation with suspicion.

If dogs go to heaven, then so do cockroaches.

All created things go back to the mind of God.

Duh, at the moment of consecration, why was the priest seeing God in the dog???