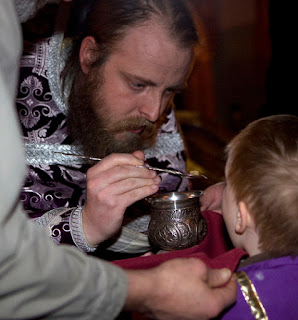 But let a man prove himself: and so let him eat of that bread, and drink of the chalice.

Edit: never mind Holy Scripture, canon law, or the constant practice of the Church over 2,000 years, logic, or  the unanimous agreement of the Fathers.

Surely everyone who's been at the parish level for the last 50 years or so has seen this kind of sacrilege hand-in-hand with other illegitimate practices like Eucharistic Ministers and Communion in the Hand. He's abusing his magisterium by suggesting sacrilege.

Here's the article from the heretical NCR:


ROMEPope Francis has strikingly suggested that Lutherans married to Catholics can personally discern whether to take Communion in the Catholic church, saying it is not his role to give permission to such persons but to encourage them to listen to what God is telling them about their situations. [You're supposed to teach them, as Pope.]

In a moving ecumenical visit to Rome’s Evangelical Lutheran church Sunday afternoon, the pontiff also called for “reconciled diversity” between the Christian denominations and said both must ask forgiveness of each other for historic persecutions.

The pope’s words about the issue of communion for Lutherans will likely attract wide attention, as Catholic teaching currently prohibits members of other Christian denominations from taking communion in the church in normal circumstances.

http://ncronline.org/news/vatican/francis-suggests-lutherans-can-discern-taking-catholic-communion-individually
Image: Utah Local News.
Posted by Tancred at 7:00 AM

I dont even know what to say. Offensive not only to us superstitious fundamentalist pharisees but what a slap in the face to living families who go through drama over communion, in my own family people dont take. but what of centuries and centuries worth of our ancestors who likewise took great care in reception of the eucharist, kingdoms were gained (paris is worth a mass) and lost over it and now its come to this. But this isn't first time communion has been used as a political tool, before kings were excommunicated for not aligning with rome but now its handed out for political appeasement, to satisfy the liberal hearts of men thinking they alone have the knowledge. Gnostics are disgusting.

After a month or so of this craptacular pontificate, I thought to myself the message coming from Bergoglio was, essentially, that Luther was right. Now, talk of communion with Lutherans.

Honestly, what more is it going to take for Cardinals and Bishops to denounce this heretic in white? He speaks as if he hates his own faith and those who practice it in the most devout manner. Is their no prince of the Church willing to tell this man to leave?

I don't see how this madness can continue, but, without any cogent resistance, I guess it will continue unabated. If Burke is the hero if the right. why not become a true counterweight to this fool who calls himself Francis.

people have to be talking behind the scenes, how could they not be

Can I "personally discern" who is the pope? Because a voice in the back of my head is telling me something about Bergoglio and his "church."

Please read the Pope's actual words in the article. He says, "talk to the Lord and then go forward" after saying precisely nothing to the woman about the Eucharist, but only about her gamily and her marriage. It's not at all clear that he is saying "go forward to take communion". And nothing else in his (characteristically labyrinthian) remarks suggests that this is what he means. I do not typically defend this Pope, but, folks, charity requires us to have our facts straight before criticizing someone - Pope or not.

I'm with you. So many people know so much more about the faith than I do. All the theologians and pundits and experts, bloggers and priests and whatnot, but nobody who can speak to this publicly and be heard? Nobody who can call Pope Francis and his minions out for heresy? I am disappointed beyond words, I must say, especially with clergy, those who run blogs. I understand to confront this is a career game changer, but to see that this is the most important consideration, is a very sad let down, indeed.
And we have people who talk about martyrdom? Good gracious, they won't even speak out for the faith when it will not cost their lives but only their career. I understand that is something, but if it is more important than the defense of Christ and Truth, how sad.
How disheartening it is to be a faithful Catholic right now.

Good Cardinals and Bishops should rise up and force Francis to resign. After all, the liberal filth Cardinals (Sodano.Re. Kasper,Daneels, etc) forced a good but extremely naïve and wimpish Pope, Benedict XVI to resign.
Francis and his gang should be thrown out with the trash and garbage they are creating in the Vatican and the Church.

By the way, look for Francis' Holy Year opening to be a big flop. The talk of Cardinal Parolin saying that Muslims are invited to participate will make good Catholic participation total only a handful!

Oh, for a Pope and the days of Pius XII again. He really knew how to Pope, and how to organize a truly Catholic Holy Year.....1950.
Damian Malliapalli

It's perfectly clear he's encouraging her to do whatever she wants, that it's fine for her to commit sacrilege, repeatedly.

All Catholcs ought to be able to discern that which is against Faith or morals.

You've laid out the utter desolation that we have to face each day. Lord, save us.

Where is the angry zealous priest or bishop who will not acquiesce any longer to this revolution against God and His Holy Laws?

Never so true. Gnostics are indeed a shoddy lot.

Ambiguity is the stepping stone towards heresy.

He always keeps a net of deniability handy. No, that won't do, don't fall for it. So what then? Are we not to believe the Scalfari interviews because he is "unreliable"? He is the official voice of the Pope and at this point I will believe anything Scalfari says the Pope said because the Pope himself validates it all by granting the next interview and not one denies anything that was said.
In this case the Pope also said words to the effect that life is bigger than rules. How do you interpret that? It's clear as day that he is telling the woman she is more in a position of deciding what is right than the Pope. A little bread and wine do no harm, remember?

the novus ordo is valid, just not licit;
jorge bergoglio is licit, just not valid.