"One Faith, One Baptism, One Lord" -- Papal Riddles: Is Pope Francis Calling for Inter-communion?

(Rome) Pope Francis visite the Evangelical Lutheran community of Rome on November 15th. That had been done before him by John Paul II. and Benedict XVI., albeit with slightly different accents. Pope Francis responded to some questions. The second question asked by Anke de Bernardinis, made a veiled question for Pope Francis to answer her question if after the interreligious general audience of 28 October, in the Evangelical Lutheran Church of Rome there would be intercommunion? Which understanding does Pope Francis have of Eucharist? The word "Eucharist" was never used by the Pope, instead, he used the Protestant community's preferred expression "Lord's Supper" throughout.
My name is Anke de Bernardinis and like many people in my community, I'm married to an Italian who is a Roman Catholic Christian. We lived together happily for many years and share the joys and pains. It hurts us very much to be separated by faith, and not to be able to go together to the Lord's Supper. Would that we could  do at last as community [ital. comunione] to reach this point? 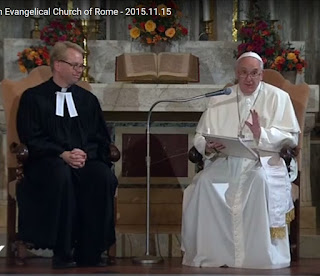 Pope Francis: Thank you, madam. [Silence]
When asked together to share the Lord's Supper, it is not easy for me to answer you, especially not in the presence of theologians like Cardinal Kasper! I'm afraid! [laughs;laughter; Applause]
I think that the Lord has told us when he gave us this mandate: "Do this in remembrance of me". And if we share the Lord's Supper, remember and imitate him, we do the same, that the Lord Jesus has done. And the Lord's supper, there will be the last banquet in the New Jerusalem, but that will be the last. On the way, however, I wonder - and I do not know how to answer, but  will make your question my own - I ask myself: Is this common Lord's Supper the goal of a path or it is to go the provision for the road to go together? I leave the question to the theologians, those who understand something of it.
It is true that in some ways  that there are no differences between us; that we have the same doctrine  - I underline the word, a difficult-to-understand word - but I wonder: But have we not the same baptism? And if we have the same baptism, then we have to go together.
They are a testimony of a deep path, because it is a conjugal way, a way of the family, of human love and said shared faith. We have the same baptism. If you feel as a sinner - and I feel myself very much a sinner - if your husband feels like a sinner, then you go to the Lord and ask him for forgiveness; your husband does the same and goes to the priest and asks for absolution. This is a help  to keep the baptism alive. 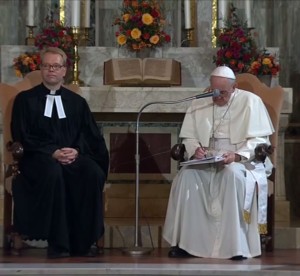 Pope takes notes during the question by Anke de Bernardinis, to which he responds spontaneously and freely
When you pray together, this baptism is growing strongly; if you teach your children who Jesus is, why Jesus came, what Jesus has done for us, you are doing the same whether in the Lutheran language or in the Catholic language, but it is the same. The Question: And the Supper? There are issues on which one, if one is honest with himself and with the few theological "Lumina", which I have, nonetheless must respond, see for yourself. "This is my body, this is my blood," the Lord has said, "do this in remembrance of me", and that's a provision on the way which helps us to go. I had a great friendship with a 48-year-old, married Anglican bishop with two children and he had this difficulty: a Catholic wife, Catholic children, himself a bishop. He accompanied his wife and children on Sunday for Mass, then went and directed the worship with his community. It was a step of participation in the Lord's Supper. Then he was gone, the Lord has called him, a righteous man. On your question I will pose to you  only one question: How can I go with my husband, so that the Lord's Supper accompanies me on my way? This is a problem that everyone must answer. But a pastor friend told me: "We believe that the Lord is there at present. He is present. You believe that the Lord is present. And where is the difference?" ---- "Ah, there are the statements, interpretations ... ".
Life is greater than the explanations and interpretations. Take always with respect to the baptism: "One faith, one baptism, one Lord," Paul   tells us, and draw the consequences. I'll never dare to give permission to do this, because it is not my responsibility. One baptism, one Lord, one faith. Speak with the Lord and continue. I do not dare to say more. [Applause]

The video for the answer

That's how Pope Francis  answered the question of a Lutheran. Did Pope Francis in his response urge inter-communion? Is  the answer of the head of the Catholic Church to be taken seriously: "I'm not saying that you should do it, but do it!"? What theological reasoning is this guide to action based on a question that has separated the Protestant denominations of the Catholic Church for half a millennium.
The video with the original sound begins at the point where the appropriate question is asked.
,
Text: Giuseppe Nardi
Bild: CTV (Screenshots)
Trans: Tancred vekron99@hotmail.com
Link to Katholisches...
AMDG
Posted by Tancred at 8:27 AM

I doubt the Pope believes in the Real Presence..

so are we mainstream western european/north american white protestants yet? The Catholic "liberals" yearn for it to be so.

"The conclusion invites the PCPCU and the LWF to create a process and timetable for addressing the remaining issues. It also suggests that the expansion of opportunities for Lutherans and Catholics to receive Holy Communion together would be a sign of the agreements already reached. The Declaration also seeks a commitment to deeper connection at the local level for Catholics and Lutherans."

I'm afraid he doesn't believe in God, maybe in some unholy presence, a god for all seasons and for all, just like the 4 musketeers, one for all and all for one.......this guy has serious problems.....

I toldya, CELI ordains women and blesses "sodomite unions" so it is in communion with Bergoglio:

Is he going to share the good news of the Sodo-Synod with them?

Few, if any of the NO liberal modernist clique believe in Real Presence. They are mainly neo-protestants

Hmm. Who wants to bet this question was as big a set up as Cardinal Cushing's set up w/Planned Parenthood?

Meanwhile, anyone who knew anything about protestantism has been saying since 1969 that one might as well go to the protestant church because one was getting the same 'mass' (and in my opinion the same non-sacramental grace).

Francis's religion is for the furtherance of his materialist global political ideology of top-down centralised power. We need to reject it definitively and have no truck with those heretical attempts to present it as some kind of evolved Catholicism. Guard souls from this evil.

And he's not the only one with problems.

Agreed. In fact, I am baffled as to what (if any) parts of the Catholic Faith he believes in.

Sorry, that was not intentional and yes, this is tragic, horrible.

The "Lutheran faith" is no my Faith, period. Plus, orthodox lutherans would not give Bergoglio the hour, he visits always the most decadent liberal cults.

How oh how did that wretched man get two thirds of the votes at the last conclave? He is a disgrace.

Moreover, how did Kasper, who had just turned 80 a few weeks before,manage to worm his way into the conclave to orchestrate the election of Bergoglio. Campaigning for someone to be elected is against the rules of conclave....so is anyone over 80 participating.
Bergoglio was elected in a false election, and thus, his election is invalid.
Damian Malliapalli

The rules of the conclave are cardinals under 80 the day the papacy falls vacant can participate. Benedict resigned February 28, and Cardinal Kasper turned 80 on March 5, so he was eligible to participate by a mere five days.

Even if all the cardinals unanimously declared it to be valid it would be invalid because he was a heretic and not a member of the church before the election.

Bergoglio was not canonically elected for these reasons. One of the rules of the Conclave is that if there are more ballots than electors then that voting session is null and void. In the alleged election of Bergoglio there was one extra ballot, though blank it nevertheless it invalidated that voting session. That means he was not canonically elected. Another reason is that Bergoglio a Jesuit like all Jesuits take another Vow, they vow if ever elected to the Papacy they will not accept. Bergolgio violated his canonical vow, an extremely serious violation. By Church law he is to be disciplined for this grave act of accepting. Cardinals and Bishops are in fact debating just how to depose him. The Doctors of the Church have said that a Pope can be deposed for serious reason. The only problem is that they left no instructions on how to go about it. It is said that there are MANY other reasons why he was not canonically elected.
Fernando

"...all Jesuits take another Vow, they vow if ever elected to the Papacy they will not accept."

is that for real?