Words of Consecration: "For All" in Cuba, "For Many" in the USA -- Pope Francis and Both-And 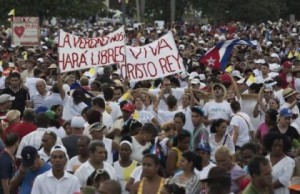 Edit: maybe the First World doesn't deserve as much of the new mercy?
(Havana / Washington) Did Christ shed his blood "for all" or  "for many"? Pope Francis celebrated the first Mass of his pastoral visit to America on Sunday at the Plaza de la Revolucion in Havana, and demonstrated there  that he takes a both-and   on the issue of the words of consecration. With that he doesn't exactly reverse the efforts of his predecessor, Benedict XVI. for a liturgical renewal, but freezes halfway.
Overall, the Pope will celebrate seven Masses in Cuba and in the United States. The words of consecration are, however, not to be identical.
The celebrations take place in Spanish and English as well - at least partially - and the Eucharistic Prayer in the language of the Church, Latin.

Words of consecration are not identical

"If you look at the words of consecration at all these Masses, you will find that you are not the same," said the Vatican expert Sandro Magister.
The first Mass in Revolution Square with the oversized Che Guevara-representation in the back, is something the Castro regime places such great importance during Pope's Visit. Pope Francis celebrated the Mass on Sunday entirely in Spanish. Before half a million faithful, the Pope at the consecration of the wine into the blood of Christ, spoke the words "por vosotros y por todos los hombres para el Perdón de los pecados", literally, "for you and for all men for the forgiveness of sins."
The Mass   Francis celebrated also on Monday, 21 September in Holguin and on Tuesday in Santiago de Cuba, were also completely in Spanish.The words of consecration, however, vary somewhat. Instead of "por vosotros" the Church leader used "por ustedes" (polite form) will tell, while the remaining words of consecration were said as in Havana.

Another Country, same language, other words of consecration

Then Pope Francis travels from the Caribbean island to the American mainland and will celebrate his first Mass in the US federal capital Washington. Despite the change of states he will celebrate this Sacrifice of the Mass in Spanish, the native language of a rapidly growing number of US citizens. The words of consecration were spoken - unlike Cuba - not  "por todos los hombres" but "por muchos" for many.
So it will be the case with the three other Holy Masses in the US, where the Pope will address the Eucharistic Prayer in Latin: "pro vobis et pro multis effundetur in remissionem peccatorum" for you and for many. In the US,  "for all" is not to be heard.

"What can be made of this vacillation between 'for all' and, for many'?" 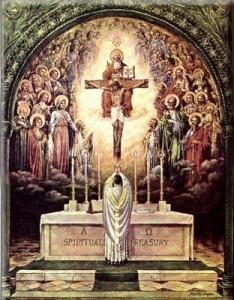 Holy Sacrifice of the Mass
"What can be made of this wavering between the" "close to the words of consecration in the US?" For all "in Cuba and" for many, wondered last Saturday Sandro Magister.
"It can be concluded that the long-standing question that Benedict XVI. finally concluded in  2012  making a definitive and unified worldwide solution is left in limbo by Pope Francis," said the Vatican expert.
The original words of consecration by Benedict XVI., the faithfully arranged transmission of the words of consecration in the vernacular languages, ​​is based directly on the official Latin formula. Because of persistent resistance of some bishops' conferences Benedict XVI. wrote on 14 April 2012 in order to overcome it, a letter to all the bishops. The "pro multis" of the Roman canon should be uniformly applied instead of the hasty translations in the course of the liturgical reform 1965/1969 in the vernaculars. Thus, the German pope wanted to counteract a misleading teaching of  universal salvation that was gaining ground among Catholics.He wrote the letter in German, with which he made it clear where the greatest resistance was situated.

"New Mercy" versus Words of Consecration?

The statement of Benedict XVI. is valid for the whole Church. As Pope Benedict resigned, some of the Bishops' Conferences, including the Italian and German, were yet delinquent and had not made a new edition of the Missal. The correction of the formula "for all", which had been naturalized after the Second Vatican Council, through the faithful rendering "for many" is seen by many as a "restriction" of "mercy".
"With the inauguration of Francis, the idea has spread that this diction [for all] corresponds more to the universal expansion of compassion, which is constantly being preached by the new pope," said Magister.
As it seems,  the Argentine Pope is representing on this point "no strict position" (Magister) and also does not seem interested in trying to enforce a certain position. His position is rather a both-and, by using both the one and the other diction "even with this trip to Cuba and the United States."
Text: Giuseppe Nardi
Image: Nuova Bussola Quotidiana
Trans: Tancred vekron99@hotmail.com
Link to Katholisches...
AMDG
Posted by Tancred at 10:23 PM

Why doesn't he just seek out the Pope Emeritus and blacken his eye? The intent is the same, no?

Even the pope does not abstain from liturgical abuse. What sort of example is that? It confirms those other priests who treat Mass as their own personal possession and see fit to add, subtract, and change the words of the Holy Sacrifice. I have not watched the pope's Mass lately and do not intend to but I have in the past and while he can kneel to be blessed by protestants and charismatics, he did not genuflect to the Lord God during the consecration of the Mass...

And he washes and kisses the feet of Muslims and trannies but can't genuflect at the Consecration.

Thanks for reminding me.

Another reason for the Mass to be celebrated solely in Latin.

I would like to summon up John XXIII, and re-arrange his face - and every other part of his space-wasting body - for having defecated on the Church by giving the Church this disaster of an anti-Liturgy. The Holy Spirit gave the Church Pentecost, reversing the division of Babel; John XXIII & Paul VI corrected the errors of the Holy Spirit and blessed the Church with VD2 & the Novus Ordo. And now this mania for destruction is spreading to the Eastern Rites - they too have suffered from the time-bombs of Damnabilissimum Concilium (as it should be called).

Nor do Bishops and priests celebrating the Eucharist in Thailand, Japan and in some areas of the East where genuflection has never has been part of either culture or liturgy.

As for the Pope genuflecting at the Consecration, apparently he has sever arthritis which is triggered off in a particular way by genuflecting as opposed to various other movements.
You're not really disturbed about that anyway.

It's those other things in your life which are causing your disgruntlement.

no need for this filth

Looks Like Feybriel is making it up again, Stephen:

It is ridiculous to think that the missionaries did not introduce kneeling when they introduce the other Catholic practices. If the Japanese are not kneeling it is because of their current bishops. American servicemen went to Latin Mass in Japan after the war, one of them would have remarked on this.

It is hard to believe that the first Japanese would suffer martyrdom for a wafer, any more than the first Romans would have. It is Feybriel who does not believe in the Body, Blood, Soul, and Divinity of Our Lord. Or any other miracle for that matter.

Leftards make much of inculcation especially when they're travelling abroad in sintropolises.

It is Our Lord who is being offended. Lord, have mercy.

Desecration of a saint... If that's not filth, what is?