(Havana) They have asked for a meeting with Pope Francis. Emphatically. However, the communist Castro regime was not  prepared to make concessions. During the stay of Pope Francis on the Caribbean island,  dozens of Cuban dissidents were arrested.
Two of them are Marta Beatriz Roque, a former political prisoner, and Miriam Leiva, an independent journalist. The aim of their detention was to prevent them from participating in public events surrounding the Pope, for example,  Vespers in the Cathedral of Havana, at which  both Roque and Leiva wanted to participate. Both dissidents could produce personal invitations from the apostolic nunciature. Yet the Cuban security agencies were not impressed.

This is the other side of the Pope's visit to Cuba

Yet this shady side of the Pope's visit will not be reported by the mainstream media.
The reports of Roque and Leiva are largely identical. The actions of the State Security were carried out according to the same pattern. Both were surrounded on the open street by several police officers, put into a car and taken to an unknown place. There they were detained for hours   together with other persons.
Also, Berta Soler, the President of the Damas de Blanco, the Ladies in White, was temporarily arrested when she wanted to visit the Apostolic Nunciature in Havana to greet the Pope. 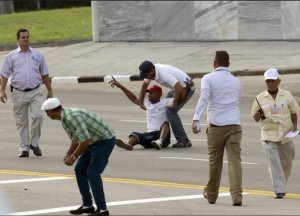 Arrested dissident who wanted to get too close - according to the regime - to Pope Francis.
According to information from dissident circles, several dozen people were arrested during the Pope's visit. Some were jailed, others placed under house arrest, while others - like Roque and Leiva -  were detained without explanation for several hours. The detention lasted as long as the pope's public events lasted. The total  affected by the police action were at least 50 people.
Vatican spokesman Father Federico Lombardi had - according to the correspondent of the Spanish daily El Pais - refused to comment on the news. "I have nothing to say", said the director of the Vatican Press Office, said El Pais.   Father Lombardi made ​​it clear that according to the program   a meeting with  Cuban dissidents was provided for. But he did not know why they did not appear on the agreed date. The Vatican spokesman also confirmed that the opposition had tried to greet the Pope "in passing." It's an experiment which has obviously failed. The communist regime was victorious once again.
For the dissidents there only remained the words that the Catholic Church leader uttered on his arrival in Cuba: "I would also like that my greeting reach especially those that I would not be able to meet for various reasons, and all scattered throughout the Cuban world" The statement has been interpreted that the pope meant the political prisoners and dissidents and the Cuban exiles.  Although many, too many, acted as if it applied neither to one nor the other, for them the Pope's visit ended before it had begun,"  said Corrispondenza Romana.
Text: Giuseppe Nardi
Image: Corrispondenza Romana
Trans: Tancred vekron99@hotmail.com
Link to Katholisches...
AMDG
Posted by Tancred at 7:56 PM

Email ThisBlogThis!Share to TwitterShare to FacebookShare to Pinterest
Labels: Bergoglio Effect, Communism is Not Dead, Cuba