"No Compromises of the Church's Teaching" -- Cardinal Müller on the Bishops' Synod, SSPX, Medjugorje and Liberation Theology 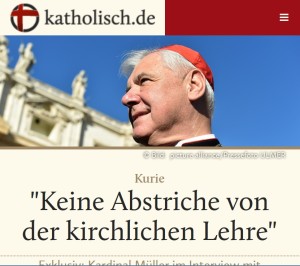 (Rome) There will be "no compromise of the Church's teaching" in the Bishops' Synod this autumn. This was affirmed  by Cardinal Gerhard Müller, the prefect of the CDF. It is meant to seek pastoral ways to better integrate people in difficult situations in the community. While there is, says the Cardinal, no "substantial news" regarding  the SSPX, there would be a decision to Medjugorje in the fall.  Katholisch.de, the media portal of the German Bishops' Conference published an  an interview with the Cardinal.

Overlooking the Synod of Bishops on marriage and family  the German cardinal stressed that the Church must help "the people, even Catholics, ...to re-understand what the point is to marry and so, also publicly, to bind a person." While the discussion is so far turned mainly to the "failure" of marriages, Cardinal Müller stressed the need for "a renewal and deepening" of marriage preparation.
The cardinal also confirmed that the "ordinary general assembly" of the CDF will deal this "autumn" with Medjugorje: "The opinion of the Congregation will be  submitted  to the Holy Father for a further decision."

Various encounters with SSPX , "which should enhance mutual trust"

When asked whether the "unification efforts were suspended or postponed," since "recently" the  Priestly Society of St. Pius X had "become noticeably quiet," said Cardinal Müller that there was  "no substantial news in this issue." "The Holy Father wants us to keep at it: with 'determination and patience.'" In the "recent months", there were "encounters of various kinds, which should enhance mutual trust." "A prerequisite for a full reconciliation" said the Cardinal again, "is the signing of a doctrinal preamble, to ensure full compliance in the essential matters of faith." The Prefect's response   suggests that this singing the Preamble of 2012 is not required..
The recent trip to Latin America by Pope Francis has shown "that the Church must use an authentic liberation theology." He, Müller, has worked "for many years in accordance with the instruction of the Congregation" which the Marxist liberation theology was condemned in the 1980s, "for such a theology that is not aligned ideologically, but interested in the good of man and society." The election of Pope Francis on the Chair of Peter is "providential" because the majority of Catholics today live in Latin America. "Pope Francis has strengthened the believers  on his journey from the Gospel and encouraged and called the peoples there to  a peaceful and equitable coexistence. This is an order of the day," said Müller.

"I have Totally Committed my Life in Fidelity to the Pope"

When asked about his statement, there is a need to " theologically restructure" the pontificate of Pope Francis, the cardinal affirmed that "the specific task of the Congregation for the Doctrine of the Faith. . It has to promote the faith and morals throughout the Catholic Church on behalf of the Pope and protect his personal relationship with the reigning pope." Cardinal Müller said: "Personally,  I have totally committed my entire life in loyalty to the Pope."
Addressing eco-Encyclical Laudato Si, Müller said, that he is "very grateful for the encyclical" to the Pope. The document had a "very strong social-ethical component" and leads from "the tradition of the social encyclicals."  It "seems" to him that the Pope  proposed, "to open the eyes of all people of good will to the problem of environmental and human ecology and promote dialogue with each other  at all levels."
About the controversial issues is the allowance of remarried divorcees to Communion and the acceptance of homosexuality, with which the Synod of Bishops will deal next October, Cardinal Müller said: "Here the Synod faces the challenge to find pastoral ways of greater integration in the community, without compromising the Word of Jesus and the Church's teaching based on it. The family is irreplaceable importance for the future of the Church and of society. "
Text: Giuseppe Nardi
Image: katholisch.de (Screenshot)
Trans: Tancred vekron99@hotmail.com
Link to Katholisches...
AMDG

The last paragraph sounds like doublespeak. Divorced and remarried Catholics can only be further integrated if they live as brother and sister with their partner.

To what tune should the preamble of 2012 be sung?