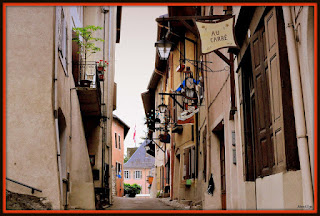 Edit: as Tiberge at Galliawatch notes, it's as if the Devil has commanded his minions to take action against a small settlement of good natured Capuchins who want to take over an abandoned Capuchin friary with the blessing of the local mayor.  Not even the mostly harmless local Ordinary doesn't seem to mind.  He'd prefer to avoid conflict.

What is interesting to me is the similarity between the tactics, objections and what motivates the Socialists and those within the Catholic Church who use such strident language to attack the Society.

The councilor, Noëlle Aznar-Molliex explains herself at the Osons-Albertville website:

During the City Council meeting of July 6, mayor Martine Berthet had intended to put to a vote the turning over of the Clos des Capucins, a city property situated on mount Adolphe Hugues, at the entrance of the medieval village of Conflans, to the association of the Convent of Saint-François de Morgon, that hopes to renovate the site and install there a community.

Osons-Albertville strongly opposes this plan. The truth is that the community of Capuchin monks of the Morgon convent, said to be "of traditional observance", is part of the line of thought of traditionalist and fundamentalist churches, that of the SSPX, and is not recognized by the church of Rome, because it has been in a state of schism since the Second Vatican Council. These communities reject ecumenism and all initiatives favoring inter-religious dialogue.

Link to Galliawatch...
AMDG
Posted by Tancred at 9:58 PM

God Bless the SSPX, and the Capuchins of Morgon. They started with about 4 friars in the late 1970's, and have probably close to 40-50 now. They have 2 other convents other than this monastery they are trying to purchase. They have many vocations. They have even helped establish a traditional cloister of Poor Clares in France, probably the only true Poor Clare house in all France.
These tactics remind me of the late Fr. Fidenzio Volpe and his dirty, underhanded tricks against the Franciscans of the Immaculate.,...all done with the support of Pope Francis (of course!!)
I wonder if this Noell person has been in contact with Pope Francis? Sounds like something he would manipulate and try to destroy.

"It's as if the Devil has commanded his minions to take action against..." Exactly. Note that the Devil's minions do not bother NewChurch with it's un-Catholic worship service. That should tell a thinking person all they need to know.

it puts me in mind of the great sufferings (and physical manifestations of such from satan) that St. John Vianney endured because he was such an effective, holy tool in the hand of God for the salvation of souls; GREAT article on the spiritual battle involved for him, and for today's priests.....

looks like these friars would bring MANY to the Heart of Christ, and satan is PO'd. May God protect, establish, and prosper them.

Q: What do socialists, Satan, and the Novus Ordo Church have in common?
A: Ecumenism, environmentalism®, and eternal damnation!

Hahaha... ha... ha... oh wait that's not funny. The Novus Ordo Spiritual Holocaust has resulted in the damnation of 100's of millions of souls. The Novus Ordo has concentration camps which still enslave devout Catholics who need to be liberated before they or their children are thrown into the eternal oven. Thankfully we have great warriors like these traditional Capuchin's who liberate these modernist concentration camps on a daily basis. Good bless our troops.

The resort to blatant and easily disproved falsehood by the enemies of the Society is most illuminating. A cause that needs to lie is a very bad one.