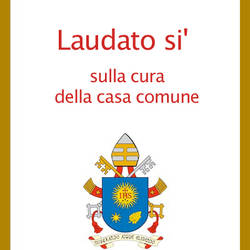 (Rome) This Thursday, June 18  the Eco-Encyclical will be presented at 11 clock in the New Synod Hall of the Vatican by Pope Francis.This was announced by the Press Office of the Holy See  and confirmed for the first time officially, that the encyclical will be titled "Laudato si" after the Canticle of St. Francis of Assisi. It will also be the first encyclical of history to also have a subtitle: "About the concern for the common house". Encyclicals have so far received the first words as a title with which they begin.
The presentation of the encyclical will be made by Cardinal Peter Turkson, President of the Pontifical Council for Justice and Peace. At his side will be Metropolitan Joannis Zizoulas of Pergamum, an  84  year old representative of the Ecumenical Patriarch Bartholomew I of Constantinople. Similarly Hans Joachim "John" Schellnhuber a representative of the international institutions. Schellnhuber is the founder and director of the Potsdam Institute for Climate Impact Research (PIK), Chairman of the German Advisory Council on Global Change (WBGU) and long-standing member of the Intergovernmental Panel on Climate (IPCC).

IPCC and UN Are Sitting at the Presentation Table - as Watchdogs?

While the presence of the Orthodox representative underlines the appreciation of  Catholic-Orthodox relations, the presence of Schellnhuber's is evidence that makes use of the eco-Encyclical, the thesis of human-inflicted global warming and thus the UN Millennium Agenda. Schellnhuber is one of the leading advocates of a drastic and costly IPCC climate policy. It's a step that would mean a serious surrender of the Catholic Church to the powerful of the world. One step,  Pope Benedict XVI. had fought against throughout his pontificate.
The warnings and concerns of climate skeptics, conservatives and pro-lifers were obviously justified. The rapprochement between the Vatican and the United Nations has been announced since the election of Pope Francis. The new cooperation was sealed with a climate conference at the Vatican late April 2015 in the presence of UN Secretary General Ban Ki-moon and UN Director Jeffrey Sachs. Already the two were mentioned at the Vatican meeting, who gave the content guidelines and direction. Is the Vatican following orders on the issue? Is Schellnhuber sitting  like a watchdog at  the presentation table? The presence of special guests or co-presenters has not been previously common.
The eco encyclical will be presented in original Italian and in French, English, German, Spanish and Portuguese translation on Thursday. One issue in the church language Latin, in which almost all encyclicals have been drawn up, has not yet been made.
Text: Giuseppe Nardi
Image: Vatican Insider
Posted by Tancred at 10:04 AM

Perhaps people will finally wake up, smell the coffee, and conclude the Vatican is on board with the NWO agenda. Prescient observers reached that conclusion back in the 1960's with John XXIII and his encyclical Pacem in Terris.

Praise be to you ?
Who is he praising - the creator, or the creation?

Before the chalice was filling now it is overflowing. Many Cardinals, many Bishops, and many Priests are on the path of perdition and they take many souls with them. To the Eucharist, there is given less and less importance.

It would not have taken a bit of imagination just to say '...Lord,' at the end of 'Praise to you.'

The ambiguity is intentional. This is how masonry in particular and evil in general work.

These are all features of this papacy.
None of these come from god .

"One issue in the church language Latin"

"Dr" Mirus has (officially) come out against Latin in the Mass (no telling when he and frances are coming out as women) -- seems all tower of babble-on pay roles lead to anti Rome.

The United Nations is now putting the pressure on Ireland to make abortion available ,how the Catholic Church can have anything to do with this organisation who's agenda is population control through abortion ,sterilisation ,contraceptives and euthanasia is a mystery ,since these polices are totally opposed to Christianity.This is the organisation Pope St Paul presented the Papal Tiara to . http://www.thejournal.ie/ireland-un-abortion-referendum-2152182-Jun2015/ http://pop.org/content/un-continues-push-radical-abortion-agenda

Since the above comment (anon@5:10 PM, June 10, 2015) references "presenting the Papal Tiara" I assume they're talking about Paul VI who is not currently a saint. But given the current trend of Canonizing every single Concilliar Pope I can esaily understand the confusion. I'm sure JP 1st (aka Unlucky Luciani) will soon be raised to the Altar for his 33-day reign

Who needs Christ when there is Garabandal?

Why all the consternation and surprise? The "RCC" is now a well oiled cog in the globalist machine. For example, the hierarchy of Ireland stopped just short of endorsing fag marriage, likewise we can expect 'Rome' to 'pastoralize' divorce, homosexual acts, abortion and euthanasia. Doctrine won't change but practice and acceptance will be given a 180 degree change, a true revolution that most Catholics will accept, 'cos the pope sez so'.
Consider this; why should we accept a religion which institutionalizes practices which the best of our pagan ancestors rejected as being contrary to both nature and common sense.

if the miracle of garabandal occurs on thursday 13 april 2017
(the miracle occurs within a year after the warning),
then from june 18 2015 ti the above date, there are 666 days.