Cardinal Kasper and His Unrealistic "Realistic Theology of Marriage" 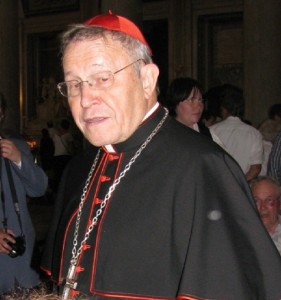 (Freiburg im Breisgau) Walter Cardinal Kasper, spokesman of the "new Mercy" is striving to keep his followers on course, because there is considerable internal Church opposition to its "opening course". Once again the Jesuits prove to be his accomplices. His new 'plea for individual solutions',  the cardinal is spreading with in the Jesuit magazine "Voices of Time" throughout the world. The title of his essay is: "Admission of Remarried Divorcees to the Sacraments? A Thorny and Complex Issue ".
He had written the new text, says Kasper, to clarify "numerous misunderstandings" which arose after his presentation before the Cardinal Consistory in February 2014. At that time Pope Francis had given him a monopoly in order to promote    the admission "of remarried divorcees", and  those cohabiting in adulterous unions against Church teaching, to Communion.

If the arsonists shouts  "fire"

Since then, the whole Church has been shocked by this fire, that Kasper  has set with the approval of the Pope. While some will try to extinguish it, others like Kasper blow, in order to arouse it even more. Kasper writes in modesty: "It was to be expected therefore that the issue has been newly flared up before and during the Extraordinary Synod of Bishops in 2014". A rather daring, if not cynical remark from the mouth of the arsonist.
The German cardinal stressed in his plea in the "Voices of Time" for the "individual solution". At the same time makes the claim  to represent a "realistic theology of marriage", which he  shall recommend to the whole Church. Such must take into account failure as well as forgiveness.
After a time of penance those affected should be granted admission to Communion under clear conditions. As conditions  Kasper calls for "an honest judgment of the person concerned about his personal situation" and a positive opinion of the minister. The respective local bishop should have the overall supervision of these penitential period.

Walter Kasper in the "Voices of Time"
Kasper emphasized that he demanded no derogations from canon law, but "a reasonable and compassionate application of the law". The Cardinal speaks in this context of his proposal even of a "higher justice" which it attains to in the application. In other words, he attests that the current practice is neither "mercy" nor "reasonable", although the right would permit such. Blame for the non-admission of remarried divorcees to communion thusly was the hard-heartedness of the Church, according to the former President of the Pontifical Council for Promoting Christian Unity .
Audacity can certainly not be denied of the German Cardinal as  he writes, despite the "pleading"  in the same breath: "It is essential in word of Jesus, that man must not separate what God has joined. It is found in all three Synoptic Gospels (Mt 5,32; 19,9; Mk 10.9; Luke 16:18).There is also the testimony of the Apostle Paul  (1 Cor 7,10 f.) [...]   Now just as ever we must now disarm the words of Jesus by adapting to the situation."

But as a master of dialectics Kasper knows a way out, because the word of Jesus should be "Not be read as fundamentalist". In one sentence the cardinal dismantled and refashioned the  as authentic mission of Jesus and accused his opponents, the defenders of the marriage sacrament, of fundamentalism, some of the worst vocabulary that is used by  political correctness as an instrument of homicide.
The same thought experiment is revisited by the cardinal, when he praises the Catholic understanding of covenant: "As God's covenant in Jesus Christ is final and inextricably linked to the church,  the marriage covenant is as a real symbol of this covenant." However,  the next sentence is reworked beyond recognition into perspective by saying, "That's a great and compelling design. However, they must not lead an idealization that his hostile to life. "

"Flexible pastoral practice of some local Churches of the early church"

Each case should be checked with "understanding, discretion  and tact". A "general solution to the problem" can not exist, but only "individual solutions". Kasper justified this by claiming that the Church could even "really not speak of an objective situation of sin, without considering the situation of the sinner, each in their each unique personal dignity" for remarried divorcees. The cardinal then breezily asserts the alleged "flexible pastoral practice of some local churches of the early church." On this point, he has become more modest in comparison to the initial allegations, but without correcting its premise.
Thus the cardinal tried to allay widespread fears of a fundamental change in practice which would inevitably entail a change of doctrine in itself. But what is new behind Kasper's modesty with its emphasis on "individual solutions" is hidden in the final analysis, and despite the many words about "conditions", "narrow conditions", "votum of the confessor" and "supervision of the local bishop." After all, whoever knows the practice in the parishes, knows how unrealistic Kaspers "realistic theology of marriage" is. So unrealistic that within a short time, at least in our latitudes, a general laissez-faire  practice   would prevail among the clergy, in turn, which would inevitably have a negative influence on the doctrine of the Faith.

How many priests want to be confronted with  remarried divorcees and otherwise irregular cohabitants to put it bluntly,  be the "party pooper" and be saddled with preprogrammed conflicts in the parish. Not even to speak of the "oversight" by the local bishops. They would bureaucratize  their "supervision"  in no time at all by allocating to any office of their Ordinariate, which is the opposite of pastoral care.
Perhaps we should recommend Cardinal Kasper takes a  "realistic theology of sin" instead of a "realistic theology of marriage"   which is actually lacking in our dioceses and parishes.
Text: Giuseppe Nardi
Image: Wikicommons / voices of the time (screenshot)
Trans: Tancred vekron99@hotmail.com
Link to Katholisches...
AMDG
Posted by Tancred at 11:44 AM

"Disarm the words of Jesus". That's it in a nutshell.

How about affirming my Latin Mass lifestyle, Cdl.? I can't help it. It's a genetically based behavior, and most worshipspaces I go to in the USA, I and my community are persecuted by a liberal feminist or homosexual liturgist who always represses our self expression, forcing us to assist in dark far away churches. Why can't we be affirrrrrrrrrrmed?

Of course it is beyond the bounds of possibility that Cardinal Kasper could actually believe that he is trying to be faithful to Christ and that one might do him the credit of thinking so. The amount of sheer ill will directed towards him in blogs like this is fairly incredible, considering that those directing the ill will are supposed to be Christian. How about a bit of Christian charity? Or does that not go within being orthodoxly Catholic?

Kasper is Francis' most favourite theologist......both of them are no more Catholic, wonder if once they were....

"Cardinal Kasper could actually believe that he is trying to be faithful to Christ.."

Luther though thus...at least he had the remnant of grace to leave the Church when he taught against It....Kasper has not even that shred of grace remaining. He is an enemy of Christ and His Church, doing his utmost to bring countless souls down to the the pit with him...he has lost all credit, unless and until he formally and publicly retracts and repents.

Thank you for proving my point.

yeah...that one really caught my eye too. Isn't it funny...that kind of a statement from a Catholic prelate in these depraved days elicits but a few comments on a blog and a yawn; in saner days it would have been a major scandal, immediately earning the speaker a formal public excommunication, and the bitter derision of all of Christendom.

You've won me over with your logic savonarola (what a telling moniker)...

let's indeed bless sodomite unions in Charity; heck let's marry them, anything less would be uncharitable.

And of course, we must bring those persisting in adulterous relations to the table of the Lord...that's true Charity. Christ's words are so very outdated...we must disarm them...in Charity.

And female priests....how can we possibly think of not allowing that...in Charity.

You're a brilliant theologian...no need of Christ anymore; He really is a little 'harsh', ah? eh? no?

Kasper is a proven and habitual liar. Remember when he attacked the African Bishops and tried to weasel out of saying that he had, while the journalist actually had him on tape?

What's Christian about lying and misrepresenting Catholic teaching, while trying to foment schism?

...not to mention the good reporter who's life, reputation, and livelihood Kasper tried to destroy. Good thing for the journalist he had the snake on tape, displaying for all to see Kasper's forked tongue.

Thank you, Susan, for proving my point even more, likewise Tancred.

Please allow me to clear the confusion in your mind. When the Kardinal speaks in his capacity as Kardinal, sarcasm, satire, etc. are normally out of place. On the other hand, commenters have no official capacity in the Church, are not ruling on dogma or points of Church law, but are venting and hoping to shame the treacherous. Kind of like the current Pope is reported as doing.

Anyhow, the true parallel would be reportage of what the Kardinal tells his associates, cronies, or whatever you want to call his intimates, in the privacy of his office, an unofficial setting like the sauna room, or wherever. Please chime in at such time as when you can tell us what he really has to say. Then you will have earned cred with readers of the EF comment section. All you have now is the aroma of sanctimony.

In the meantime, I have an opening for a guy to sweep up behind the elephants at the big tent.

I won't be applying, since it sounds like you are well qualified yourself to deal with s**t.

Go be an outraged twink someplace else.

Hmmm... sounds like Savanorola won't be turning the other cheek anytime soon.