(Paris / Munich) From April Fool's back to serious. As a number of readers immediately realized  that the report on the Prohibition of the Good Friday processions was an April Fools joke. The French Blog Salon Beige wanted to illustrate the latent to open aversion shown by the French Government against Christianity in a joke. A serious issue was packaged into a joke.
At  several Parisian parishes, Good Friday processions are held as usual again this year.
So back to serious. Tomorrow is Good Friday, Cardinal Reinhard Marx, the most influential supporter of the Kasper theses among the diocesan bishops is leading the Good Friday procession in Munich. He will wear the so-called "Lampedusa Cross", which was made on the Italian Mediterranean island to bring attention to the "fate of asylum seekers." This was announced by the archbishop's press office  yesterday.

In July 2013, the island of Lampedusa was thrown in the spotlight when Pope Francis made his first trip abroad there.
The "Lampedusa Cross" is made of two planks of a ship, with which immigrants from North Africa came to the island, which belongs to Italy.  Lampedusa is off the coast of Tunisia and is the first destination of migrant vessels coming today mainly from Libya to bring illegal immigrants to Europe. Lampedusa is the first place where the arrivals are first received by the Italian Government  before being sent to  Sicily or the European continent.
The 60 kg cross was made by the carpenter Franco Tuccio of Lampedusa and shown to Pope Francis on April of 2014 at St. Peter's Square and blessed by him. It is apparently the symbol of a "spiritual relay race". "Whoever requests it,  gets it," said Emmanuele Vai, Casa dello Spirito, Director of the Foundation e dell'Arte, which supports the action. 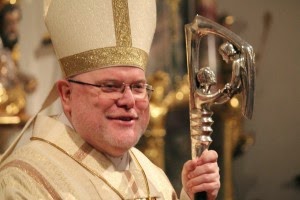 Cardinal Marx and the Cross
Cardinal Marx thus leads a "crossroads of peoples", who are gathered in "the various linguistic and ethnic groups", said the press office of the Archdiocese of Munich and Freising. The motto of the Good Friday procession is "I was a stranger, and ye took me in." It will provide the focus,  on the "often life-threatening exodus of asylum seekers."
In Italy, critics speak of a "Lampedusa syndrome", which had been introduced into the political debate. In this escapees and refugees would be interwoven with migration and migrants and generalized into the extreme example of immigrants in fragile boats in  distress off Lampedusa and stylized into a symbol that serves as a taboo for the immigration debate in Europe.
In reality, distress tragedies - thank God - even off Lampedusa, are a rarity. In addition,  only a tiny part of Europe's immigration comes by sea to Lampedusa. It is therefore inappropriate to give the impression to make Lampedusa a synonym for millions of migrants to Europe.

Cardinal Marx thus puts the accent on Good Friday by manipulating a politically-correct issue. "The Cardinal  always has the pulse of the times and the State," said a Bavarian canon, who wishes to remain anonymous, with an ambiguous smile. "He's  taken a heavy cross to bear" in reference to the weight of Lampedusa Cross.
The SSPX spoke in connection with the Pope's visit to Lampedusa 2013 of a "slant-progressive simplification" of a complex issue.
Text: Giuseppe Nardi
image: Famiglia Cristiana
Trans: Tancred vekron99@hotmail.com
Link to Katholisches...
AMDG
Posted by Tancred at 7:44 PM

I have long held the personal opinion that April Fools day is some kind of a pagan practice. Some jokes may be in good taste but the Idea to have a day when everyone can tell lies seems pagan. A lie is a lie and satan is the father of lies. I believe it to be an affront to God who is Truth, and is displeasing to God. I put it on par with the Mardi Gras. Some may say I'm making a big deal out of nothing, but I don't think so.

The problem with cutting out anonymous comments is that people can still be anonymous. I don't want to stifle too much what's going on, but comments like this definitely make me want to do somethint.

"The Cardinal always has the pulse of the times and the State,"

aaaaaaaand there it is.

Tancred, I read an article on another Traditional site, it announced that Pope Francis would be saying a Latin Tridentine Mass on Easter Sunday morning in St. Peter's Basilica. That he had been practicing to say it with the help of others. The article had pics of the Usus Antiquior and all the information that this was announced by others and confirmed by Lombardi in a news conference. I was taken aback, it was great to hear this. Then at the end of the article it said "April Fools". I guess you may think that a day to celebrate lying is just plain innocent. I'm sorry but I don't.
Andrew

Not a personal problem, but a Christian problem. Scrupulous I am not. Realistic yes but not scrupulous. Haloween, a day to dress up like satan and his minions. Mardi Gras, the day before ash Wednesday to celebrate committing all possible sins, April Fools, a day to celebrate lying as a virtue. All this for the unscrupulous.

I'll fashion you a paper mitre if it makes you feel more authoritative and important.