(Venice) On 31 January 2015  the traditional form of the Roman Rite returned back to the Patriarchal Basilica of Venice.
The feast of St. Mark the Evangelist will be celebrated by the Church on 25 April. In the old Venetian Republic whose patron was the Evangelist, also the transfer of the relics of the saint was in 828 to Venice is commemorated for the end of January. As the location where the relics of St. Mark's Basilica unique built by the Venetians.
Last Saturday this feast which took place 1200 years ago was commemorated in St. Mark's Basilica at the altar of Nikopoia in the Immemorial Mass of All Ages. The Icon of the Virgin, the "Bringer of Victory",  The icon of Our Lady enthroned with the Child Jesus   on her lap is attributed to the Constantinopolitan icon painter Luca Cancellari (Λουκάς Καγκελλάρης) in the 12th century.  Numerous representations of this icon of Our Lady, "Mary of victory",  were executed after the Battle of Lepanto.

828  the Relics of St. Mark the Evangelist Reach  Venice 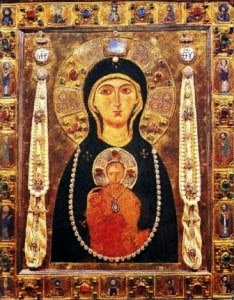 The Nikopoia ("Bringer of Victory") in St. Mark's Basilica in Venice
Mark the Evangelist founded not only the Coptic Patriarchate Alexandria in Egypt today. But to him, the foundation of the Patriarchate of Aquileia is attributed. In the Latin Church in 602, the inheritance of the two Patriarchates was divided in the upper Adriatic Sea into the two patriarchates (old) Aquileia and Grado (New Aquileia). The Patriarch of Grado was also in the lagoon of Venice, where he has resided since 1105. In 1451 the Patriarchate was officially transferred from Grado to Venice.
The celebration last Saturday  was made possible by the Patriarch who since  2012, Francesco Moraglia. Already his predecessor, Cardinal Angelo Scola, now Archbishop of Milan, had established a rectorate in Venice for the believers of the Old Rite and entrusted it to the FSSP. The seat of the community is the ancient San Simone Piccolo church on the Grand Canal (opposite the train station). After Father Konrad zu Löwenstein's  had led the community for  several years, this task in was taken over by Father Jean-Cyrille Sow FSSP.
Patriarch Moraglia  has  a coat of arms is that is modeled on that of St. Pius X., who was his predecessor as Patriarch. The Patriarch of Venice, as Cardinal, wears purple. Unlike his predecessors, the reigning patriarch, however,  has not been considered in the third consistory since his appointment to the cardinalate.

Well this is some much needed great news indeed! And what a magnificently beautiful church!

Thank you for reporting on this.

The Patriarch of Venice is still young (61). Despite Francis, who unfortunately for the Church is the Pope at the moment, this Patriarch will advance very high. Francis will be dead within 2 years, and with him, his agenda and mindset, and his advisors and supporters.
This Patriarch will be among the first elevated after that, and God Willing, even further.

Sic rebus stantibus, Moraglia wil never be a cardinal, but thank God there are again bishops faithful to the Church..... let's pray for them.

What has been done to Patriarch Moraglia by Bergoglio is disgraceful. But then again, this is Bergoglio about whom we are speaking. He is a Peronist through and through and he clearly fears that Moraglia could become his successor. If nothing else, he and his advisors certainly fear Moraglia's values and positions.

All that said, this passion we are enduring is proof positive that Benedict's decision was a terrible one. Benedict was no traditionalist, but his Cardinal choices were far better than Bergoglio's have been. Just imagine if he had held on for two more years. Another 30 or so Cardinals, including Moraglia, would have been named. Of course, Benedict could have elevated him at the last consistory and didn't. Had he waited, there's little chance Bergoglio would be pope and a far greater likelihood someone of higher quality would be.

I pray for Jorge Bergoglio and hold the sedevacantist position.It may be the first time novus ordo & traditional catholics have something to agree upon.Pray he converts to the true holy apostolic catholic faith.

A radical liberal person like Francis who is supremely confident in and of himself and of his position, and who is abusive to those of different mindset and outlook VERY often suffer a severe and long lasting defeat,disaster, or disappointment which ruins their entire agenda.
This will happen to Francis this Fall. It will be so devastating, and such a repudiation of him and his agenda, that he will either die shortly after, or resign and then die soon after that.
A very good man like the Patriarch of Venice does not need to be a Cardinal to become Pope. Very many Cardinals know the game Francis is playing by rejecting outstanding leaders like Moraglia, and they resent him for it intensely.
Francis, and everything he stands for will be rejected at the next conclave....which will be sooner than Francis' supporters think.

Sorry to say this but it's largely Benedict's Cardinals who elected bergoglio.

Why are you sorry,it's the truth!