(Rome) The Office for the Liturgical Celebrations of the Pope published the calendar of the celebrations of the Pope to the Second Sunday after Easter. For the day of the Paschal Triduum all celebrations of the Chrism Mass in St. Peter's Basilica in the morning of Holy Thursday until the Apostolic Blessing Urbi et Orbi  scheduled on Easter Sunday at 12 noon clock. Not mentioned is the Mass of the Lord's Supper on the evening of Holy Thursday, where the Paschal Triduum begins liturgically. The calendar was published in the Wednesday edition of L'Osservatore Roman (see picture below).

Vaticanists Speculate About "Spectacular" Washing of the Feet 2015

Bets are being made by  Vaticanists, about who "spectacular" would   Pope Francis wash  in this year's feet washing. 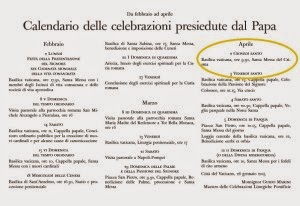 Liturgical Calendar of the Pope in the Osservatore Romano on 01/28/2015
The exhibition on the evening of Holy Thursday is constitutive of meaning for the Catholic Church and its content is heavy with meaning. It is thought the washing of the feet, which the Lord  undertook for the apostles.  is a sign that the apostolic succession must always be a humble service. To express this, popes washed  cardinals' and bishops' feet as it had been directly relegated.
But this is only one element. That same evening, is the exposition of the Blessed Sacrament and Which is so inextricably linked, the establishment of the ministerial priesthood through Jesus Christ. This double appointment is the center of the Maundy Thursday Liturgy and is closely bound up with the consecrated church  as a sacred space. This requires that the Holy Mass of the Lord's Supper is celebrated by the pastors in their episcopal church with the faithful people.  In 2014 an initiative was launched by the Catholic media to the bishops not to leave their cathedrals on this evening to celebrate elsewhere.
This initiative had a reason and at the same time had to fall into the void because of this reason, as it was the Pope himself, who, left the Lateran Basilica, his Episcopal Church. Some media-savvy bishops announced that they want to follow the papal "model". 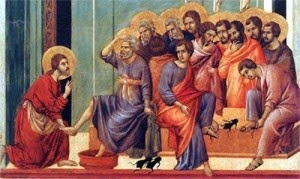 Jesus washed the feet not just anyone, but the apostles
In 2013 the Pope visited a juvenile prison in Rome. He celebrated there with the exclusion of the faithful people in a multi-purpose hall and washed the feet of young prisoners, including girls and Muslims. It looked like a humanly sympathetic, but highly controversial liturgical gesture. It is still unclear whether the Pope indiscriminately gave Holy Communion as well. The Holy See Press Office did not take a position.
In 2014 Pope Francis repeated "his" way and celebrated the Missa Lord's Supper in a sheltered facility in Rome.  He washed the feet of the disabled. Again, in the absence of the faithful people, but not to the public. The media reported eagerly over the papal trip, while the Episcopal Church of Rome, the Lateran Basilica, was orphaned for the second year. This solidified Francis in a shift in  axis of perception away from the Holy Eucharist towards the washing of the feet, which was also subject to reinterpretation. It also raises the question of the Eucharistic understanding.

The Last Supper
The Vatican media adapted themselves willingly to the papal activism and reported in 2014 in advance, the Pope will wash the feet of the disabled of "different beliefs, ethnicity and age'.
The gap in today by L'Osservatore Romano's published calendar of papal celebrations suggests that Pope Francis is in search of an exclusive  Mass of the Lord's Supper, but heavily publicized context for the humble washing of feet.  Among the Vaticanistas there are already are some highly quotable ideas, because  the Vatican secrecy is also quite irritating.
Text: Giuseppe Nardi
image: AciPrensa / Osservatore Romano / Pagina Catolica
Posted by Tancred at 9:00 AM

I can arrange for Bigfoot, a giant octopus, a Martian female, an elephant, an orangutan, a guy in a wheelchair, John Cleese, a Jew, a Moslem, Hairy Reed, Hans Kung, and Nancy Pelosi if the Pontiff wants. For a nice fee, of course! No one outdoes the spectacles of this Pontiff! (Unless a bishop in the well-heeled States can coax me.) Just like the modernists want, but maybe just couldn't envision, he brings us back to the Pilgrim Church in the days of Roman Empire, where the Coliseum was the place to be!

" It looked like a humanly sympathetic, but highly controversial liturgical gesture."

'gesture' is indeed an accurately descriptive word, but an even more accurate descriptor might be 'gimmick'...this whole papacy is one of gimmicks, and spectacles (as Barnum points out), and scandal given.

And Barnum, I might point out that he brings us not just back to the Coliseum, but also to the Circus...in the 2nd and 21st century meanings of the word.

Nice to see that they dressed for the occasion.

I am highly offended that he has not washed the feet of Wiccan transsexuals.

Oh dear, he will soon do it, wonder if I could hope for a feetwashing because I'm not brainwashed.....hem some suggestion? The poor cartoonists of Charlie Hebdo now jobless, brainless they've been since a long time, you bet? AK

Probably will be some stunt with washing the feet of Israelis and Palestinians, or at least have a Muslim and a Jew thrown into the mix.

I see the Vatican will now be providing free shaves, showers, and haircuts for the homeless commencing in March. You don't suppose the washing of the feet this Holy Thursday will be expanded to include....No!...Not possible!

Liam....considering their footwashing has ZERO to do with the reality of why Our Lord did this and that it was done for the Apostles only...I'm afraid your fears may not be unfounded.

Jesus did not kiss the feet of the Apostles. But then, He was not as humble as Jorge.

Does anyone else consider that since the Church stopped listening to
Christ and prefers to invent "reasonable hopes" and peaceful theories, He no longer gives us a representative of Himself, but rather a parody of ourselves.

Nobody, and I mean nobody, is as humble as Father Jorge'. If you don't believe me, just ask him.

That's trans"GENDER" !
Can we at least use the correct, collegial name? Especially since we are back into the spirit of Vatican II.
Or are we too promethean , funeral-faced, self-absorbed, and neopalagian?
Gosh!

I foresee a group made up of crippled and starving homosexual, transgender, Islamic, Protestant, and atheistic homeless people who have arrived right off the refugee boats six months prior.

Preferably from some third-world cesspool that's really peripheries-ish and obviously suffering from the intrinsic evil of man-made global warming.

Thank you for this. I needed a bit of levity right about now. I have been worrying & praying so much, but the absurdity (albeit all too possible) of one-upmanship by virtue of the misery quotient of the group was just the tonic I needed!

Depends of the timing. I just saw website report that the Papa now wants to show solidarity with illegal immigrants by crossing the border illegally at the Rio Grande. Guess the Maundy Thursdays enormities can only go so far, the frisson dosage must be upped. Maybe he'll be lunching a Ciudad Juarez on Good Friday with a million other Christs ready to swim for it.

If he wants to cross a border illegally, go for le plus grand frisson, and display moral street cred argentine, I suggest he visit South Korea again, but this time try to enter North Korea illegally to rescue his brethren in the Church Militant there.

Actually, doesn't claiming to be humble mean that...you're not?

He himself is the "Cod of Surprises" -- mostly publicity hound. I guess Madonna is his role-model.

Jesus ONLY WASHED HIS DISCIPLES's feet, NOT WOMEN (even His Mother). Why our Pope and other Priests are not following Him????

They do not approve of that Jesus.

Hey Anon 5:06-- Jesus gave the authority to confect the Eucharist- "Do this in memory of me" to the Apostles. He gave the sacraments to all His followers in the Church, male or female.

Now go back to your lesbian website and teach them the Truth.

This is a sharing idea between Human Beings, not arguing, cursing or using bad words to say on this web. Whoever like our Pope, then keep going... no one force not to. Pray daily for him more and more.