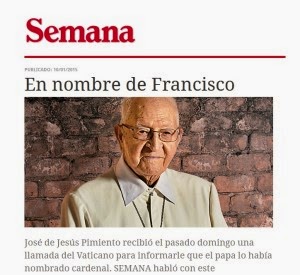 (Bogota) He is nearing 100 and will be almost the oldest member of the College of Cardinals, when  Pope Francis will put the purple biretta on his head on February 14.  We are talking about Colombia's neo-Cardinal José de Jesús Rodriguez Pimiento, for almost 20 years emeritus Archbishop of Manizales.
In the current issue of the weekly magazine Semana dated January 11, an interview with  the Cardinal who will turn 96 years old was published in spe. The interview was published under the title "In the name of Francis."
The weekly claims to have conducted the interview because of the cardinal survey.  The named topic is"gay marriage and Cuba."
Semana: What did you feel when you heard the news?
José de Jesús Pimiento: Surprise. I'm not hoping for such an honor, because I have become an elderly and withdrawn person. It is a noble and generous offer of the Pope, that inspires me and acknowledges the work  that I have done. It is a comfort.
Semana: Why do you think Francis has chosen you?
José de Jesús Pimiento: He wants to highlight those who have effectively worked in the ministry. He sees us as models. Although I do not think I'm that, I humbly recognize that honor.
Semana: What was your job?
José de Jesús Pimiento: I have worked in various dioceses and given stimulus to the social work of the Church. I have coordinated the Accion Social Accion Catolica and  done definite work to assist the victims of the tragedy of Nevado del Ruiz. I have twice led  the Episcopal Conference, have been involved with the Holy See on the reform of the Concordat and worked in favor of implementing the Second Vatican Council in Colombia. I could not do everything what I wanted, but at least I moved ideas.
Semana: And what did you do?
José de Jesús Pimiento: I helped, instead of exploitation and capitalism, to solve the problems of the poor, like the excessive accumulation of goods that cause misery in the world.
Semana: Could the Pope also send a message of peace to Colombia?
José de Jesús Pimiento: I do not know if he plans to. In any case, my appointment is a call to Colombia to better understand its spiritual values ​​and preserve them.
Semana: Do you agree generally with Francis?
José de Jesús Pimiento: I was touched because he stimulates the life of the Church. He is a creative shepherd, and knows his thinking on needs   time to apply. Today we encourage the values ​​that humanity needs.
Semana: What do you think about gay marriage?
José de Jesús Pimiento: The state legislature makes many mistakes. What  the Lord and nature have determined can not be changed. Gay marriage is a  union that can be tolerated, but it is not a marriage.
Semana: What do you say about the work of the Pope in the case of United States and Cuba?
José de Jesús Pimiento: What he has done is not just   political, but the application of the Gospel in the life of  States.
Semana: Are you now living in the Vatican?
José de Jesús Pimiento: I'll stay where I am, in the retreat house of the Foyer de Charité from Bucaramanga and will continue to help those who seek me for advice.
Born in 1919 in Colombia, José de Jesús Rodriguez Pimiento  was ordained a priest in 1941.  In1955 Pope Pius XII appointed him Titular Bishop of Apollinis in Lydia (now Turkey) and Auxiliary Bishop of Pasto. In 1959 he was appointed by Pope John XXIII. to the See of Monteria. As a diocesan bishop, Msgr. Pimiento took part in the rest of the Second Vatican Council. In 1964 he was appointed by Pope Paul VI.  as Bishop of Garzón-Neiva and in 1975 as Archbishop of Manizales. In 1996, Pope John Paul II. acccepted the age-related resignation of the then 77 year old  archbishop. As a delegate, he participated in the II. And III. General Conference of Latin American Bishops, In 1968 in Medellin (Colombia) and 1979 in Puebla de los Angeles (Mexico), he was elected Chairman of the Colombian Bishops' Conference 1972.   It was an office which he held two consecutive periods. After his retirement he returned to pastoral care and worked as a missionary.  For several months he managed his home diocese as Apostolic Administrator. In 2005 he celebrated his golden jubilee as bishop.
Translation: Giuseppe Nardi
image: Semana (Screenshots)
Trans: Tancred verkon99@hotmailcom
Link to Katholisches...
AMDG

Email ThisBlogThis!Share to TwitterShare to FacebookShare to Pinterest
Labels: Aberrosexualism, Cuba, In the Name of Francis, Marxism

This is why I attend a true traditional catholic church.How can defend the book of Romans when prelates defend what Almighty G-d deems 'abomination'?!?!

What a wasted life...so many souls at risk under such a bad shepherd ....may God forgive him - if that is possible .

If somebody offends you punch him in the face:

Absolutely everything about this interview and this man's biography drips with dissent, corruption, and heterodoxy....just look at the buzzwords. An evil man; praised and raised to the heights by evil men.

We had a good pope, now we have, maybe, the pope we deserve. May God have mercy!

And the dissenters and heterodox continue to be rewarded---in this life.

Dear God save us from these heretics who are a cancer to our Holy Mother Church.

God save us from Pope Francis!

So this priest has lived this long to say this...

I would like to know exactly how he "implemented the Second Vatican Council" ...

By being a heretical asshole.

Thanks, Otto, for bringing this to our attention. It sounds like Archbishop Pimiento is living the Gospel that he preaches.

I agree but all of us,to some extent, are guilty of sin and present state of the western hemisphere.If we, one by one, think, pray, and act like moral disciplined catholics,prelates like this old hippie would go away and be regulated to NPR interviews at 3am and Charlie Rose. (Which I estimate has an audience of 23-24 retirement home baby boomers)