After 34 Years The Retirement of Egon Kapellari 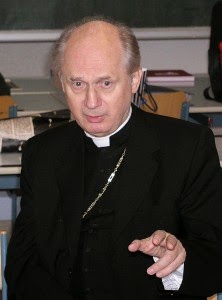 Bishop Egon Kapellari
(Vienna / Rome) Bishop Egon Kapellari of Graz-Seckau had announced his retirement four days ago. He had just completed his 79th year of life and is expecting release from  his position as supreme pastor of a diocese. Today Pope Francis accepted the resignation of the long-serving and retired the Bishop of Austria.
Egon Kapellari was born on 12 January 1936 at Leoben in Upper Styria. In 1957 he received his doctorate of law at the University of Graz. Then he began at the University of Salzburg with the study of theology. 1964-1981 he was also university chaplain in Graz. In1981 Pope John Paul II. appointed him Bishop of Gurk. The mid-80s Kapellari  was consideredin the progressive climate distant from Rome, the most "Romtreuest" [Most loyal to Rome] among Austrian bishops. When John Paul II. sought to achieve a new direction in the episcopal appointments in the Austrian Church with the retirement of Cardinal Franz König from 1986, it was a quiet time for Bishop Kapellari.

In 2001 he was appointed by John Paul II. from Carinthia back to Styria and appointed  Bishop of Graz-Seckau. At the same time Kapellari was Vice President of the Austrian Bishops' Conference. He is responsible for the areas of liturgy, culture and media.
2011 Kapillari heard a bizarre proposal: priests who do not adhere to celibacy, a fine should be imposed.  Toward   the "priest" initiative, disobedient priests, Kapellari showed himself to be as indecisive as his brother bishops.
In March 2013, Kapellari spoke to Pastor Karl Tropper of St. Veit am Vogau of a ban on preaching, because he had expressed criticism of Islam and homosexuality. Pastor Tropper was come to the attention of the media and was dropped by the bishop and sent to early retirement.
October 2013 Bishop Kapellari had just been appointed the tradition-priest Konrad Sterninnger of parish ministry. Even before the well-known priest entered his new responsibility for three parishes, progressive circles organized a smear campaign against Father Sterninger. The Parish Councils informed the bishop to reject the priest. The Diocese talked about finding a task that  "better" corresponded to "his talents." Since the beginning of 2014 he is the same again provisor the Pilgrimage Church of Frauenberg-Rehkogel in Upper Styria.
In September 2014 Bishop Kapellari forbade a "service for remarried divorcees, gays, lesbians and single mothers" with "Communion for all". The service was organized by a priest, Bernhard Preiss, a disobedient priest of the "priest" initiative and the suspended Deacon Gottfried Url. Kapellari spoke of a rash "go it alone".

Both in the cause of Cardinal Gröer (Archdiocese of Vienna) as well as in that  of  almost Bishop Wagner (Diocese of Linz) showed Kapellari a flexible attitude. From progressive he was decried as "conservative", however  the  conservative was  limited, less on the public defense of Catholic doctrine, but rather to  sitting out progressive demands. To them he replicated especially with the neutral warning of a "division" of the Church, without too much content in responding to the questions. In progressive criticism, Kapellari was a "brakeman before the Lord"  (The Lady), therefore, is not entirely wrong. The profile of a strong   preacher of the faith and a spiritual leader who must take responsibility for his diocese, looks different. However, Kapellari never saw himself in a leadership position. "I'm not a tribune of the people," said the quiet, rather shy, episcopal priest in the early years. Nevertheless, he just stood at the head of a diocese  for nearly 34 years. Maybe they in Rome and Vienna are convinced that this is the maximum possible in a time critical of the church.
The Chapter chose the former Vicar General Heinrich Schnuderl as Administrator. It is expected that Kapellari's successor will not come as diocesan bishop of Styria.
Text: Martha Weinzl
image: Wikicommons (Dnalor 01)
Trans: vekron99@hotmail.com
Link....
AMDG

I don't know the man, but it sounds like he had a wet finger in the air at all times, if this article is credible. And I have no doubt it is, being on this website.

But my real point is: Funny how bishops like Kapallari, George, and whoever with a modicum of loyalty to Christ and His Church have such a hard, hard time disciplining heretical priests, and the previous Popes heretical bishops, while the current Pope has no qualms about disciplining cardinals and bishops for their fidelity, not to mention bishops in the Wuerl & Mahoney mold.

Argies are not gentlemen, everybody knows it, read their blogs.....

I don't think that's what Putazo means, but I posted another story.

Homosexual child rapists like Fr. Marcial Maciel were protected by St. John Paul II [the great] because they were bringing in millions of dollars to the institutional church. Meanwhile Archbishop Lefebvre was excommunicated. Go figure.

You are off your rocker and hide behind the Holy Eucharist. Msgr. Lefebvre I understand, you I do not. Go bay and howl at some liberal Catholic website where you will be with like minded people who rail at the Roman Catholic in the hope that someone will think them moral. I know you are indirectly agreeing with me, but what do libel of John Paul II and dredging up Maciel have to do with what I said? (Maciel's protection in the Vatican was not John Paul's doing, lok it up in the New Oxford Review.)