The Church Blooms With Tradition -- Example of Limmerick

(Dublin) It would be a euphemism if one were to describe the pontificate of Pope Francis as "favorable" for tradition. Where Pope Francis is not even restricted to brutally attacking  against the Franciscan Friars of the Immaculate, he generates through gestures and multiple statements, a climate in which other leaders in the Church whether rightly or not,  are harassed for their connection to Tradition by citing him in many ways.  Equality and equal treatment can only be spoken of  in rare cases.
This open or latent discrimination in the dioceses and religious communities interferes with the growth of the tradition, but above all it prevents missionary work. In a state of mere toleration,  tradition is hedged in on an allotment. There they may be, but  no visibility is possible. If they take such on themselves, they must expect reprisals. This results in a heavily damaged Church in  Europe itself, deprived of  the medicine they need for recovery. A form of self-hatred, the unconscious self-mutilation or blindness?

The Successful Example of Limerick

Sacred Heart Church of Limerick
At the beginning of Advent nevertheless, an example with good results has been reported.
In Ireland, the Jesuits sold in 2006 the most popular Sacred Heart Church, in Limerick City. Limerick is a Viking settlement, which was created with the name Hlymrekr and   first occupied in 812. The city now has nearly 100,000 inhabitants and is the third largest city in Ireland.
The buyer of the church was a construction company that wanted to convert the church into a swimming pool and wellness center. The construction company came but in financial difficulties and was unable to realize the conversion of the Sacred Heart Church. Then a "miracle", happened as Messa in Latino reported.   In 2012, the church was bought back from its profane, six year long ownership by the Institute of Christ the King Sovereign Priest (ICRSS)  and resurfaced. Due to the special Old Ritual situation,  the Institute was able to purchase the entire complex of a former Jesuit college, church and garden for around 700,000 euros instead of the originally requested four million.
That Old Ritual Communities often have to build or buy new churches, is a testament to the previously mentioned "special treatment". In this specific case, the Jesuits had already made the sale. The successful buyback was overseen by the young canon, who now works at the Sacred Heart Church, with particular satisfaction.

Like a Sardine: Instead of a Seminary Interreligious Welcome Center for Immigrants

As young as the priests are, the canonically erected instituted  Institute of Christ the King Sovereign Priest, established in 1990 is also young,  based in the Italian Gricigliano. The Institute's own seminary in Tuscany is far too small to accommodate the number of seminarians. In Italy it was not yet possible, however, to find a second seminary. The community wanted to buy a  pontifical seminary vacant for decades in Sardinia. When the bishop in charge found out, he prevented the purchase. Instead of a seminary of  an Old Ritual Community an inter-religious and inter-cultural "Welcome Center" for immigrants has been established in its place. (see "Interreligious and intercultural center" instead Seminary of the Institute of Christ the King Sovereign Priest ). 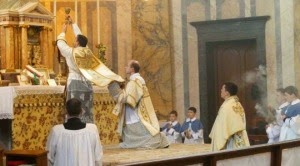 Celebration in the traditional rite in Limerick
The Jesuit Order  had begun in 1865 with the construction of the church, which was completed and dedicated in 1868. It is the oldest church in Ireland dedicated to the Sacred Heart. The interior has been designed with large mosaics. On the large organ loft is a Telford organ, highly valuedby church musicians from 1924. The Institute of Christ the King Sovereign Priest  has been afforded a successful restoration of the Telford organ, by restorer Padraig O'Donovan from Corck.
The Jesuits sold everything with the sale of the church, including all the equipment,  liturgical objects, confessionals and pews but also the altar, the Stations of the Cross, and even the tabernacle.
Painfully,  the Sacred Heart statue which was   especially venerated by the faithful was found to be missing. It was always lit and could be seen immediately from any entrance. The church belonged to the city's most visited. The Sacred Heart Friday on the first Friday of the month was firmly anchored in the population.

The Moral of the Story

Today,  the church is again a thriving center of the Catholic Church. Daily Holy Mass is celebrated in the traditional rite.
Messa in Latino writes: "A beautiful story with a happy ending, and with a moral of the story which some do not like to hear: When we trust ourselves in humility and offer obedience to traditional orders and communities, then the church blooms anew".
Text: Giuseppe Nardi
image: ICRSS / Clerical Whispers
Trans: Tancred vekronn99@hotmail.com
Link to Katholisches...
AMDG
Posted by Tancred at 10:48 AM

Email ThisBlogThis!Share to TwitterShare to FacebookShare to Pinterest
Labels: Institute of Christ the King, Limmerick, Sacred Heart of Jesus

Every day missionaries are crying out for liturgical items ,yet this church was sold with everything left in it ,it just shows what utter disregard they have even for the tabernacle ,what would have happened to those items ,if the church had not been saved. Sadly the following link shows what happens to many of them. http://www.patheos.com/blogs/deaconsbench/2014/05/they-took-confessionals-and-he-put-them-in-his-bar-as-urinal-stalls/

The Jesuits would never have sold to a Catholic order which would have used the church for its holy and consecrated purpose.

I attended this church when it was run by the Jesuits. Before the church building was sold in 2006, the building was fully deconsecrated. The Jesuit order is quickly diminishing in Limerick and throughout Ireland, that is why they sold the church in 2006. One other point, there are several very large church buildings within literally 500 metres of this church as well. So I can understand why the Jesuits sold when they did.
But I am delighted that the church was bought by the IICK and is now open for those to attend and to worship.

The tabernacle, stations of the cross and all the statues were gone before the ICKSP bought it. They're replacing everything. They have just put up new stations. The Jesuits did not leave everything to the builders. Read the article properly.

Paul VI tries to explain why the new mass. Worth a read. http://www.ewtn.com/library/PAPALDOC/P6691126.HTM

Are ICSRR priests ordained by bishop's concecrated in the pre-june 1968 rite or the post -June 1968 rite?

CHANGES IN MASS FOR GREATER APOSTOLATE

"9. We have reason indeed for regret, reason almost for bewilderment. What can we put in the place of that language of the angels? We are giving up something of priceless worth. But why? What is more precious than these loftiest of our Church's values?

## Nero was "human" - I don't recall his being "apostolic". "Apostle-killing", maybe. Lots of things are "human" - like paedophilia, or murder. That's not a reason to do them; and in fact, the Church forbids them.