Cardinal Scola: Francis Will Not Allow Remarried Divorcees to Communion 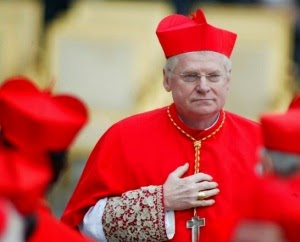 (Milan) While within the Church  one of Benedict XVI's corrected essays of 1972 is being discussed, Archbishop Angelo Cardinal Scola Milan gave an interview  yesterday published by Corriere della Sera on a position about Communion for remarried divorcees.
Cardinal Scola was, as has been the case with Cardinal Walter Kasper, appointed by Pope Francis personally to the synod. Under the impact of the first part of the Synod  the Archbishop replied with a rejection of the "new mercy."  When asked whether he could imagine that Pope Francis will make a decision for Communion for remarried divorcees, Cardinal Scola said: "I think, rather, that he will not take it."
The Cardinal had been the favorite in 2013   in the conclave, and had received the most votes in the first ballot, but did not prevail. His appointment as a member of the synod was seen by observers in this context. The Roman Catholic Archdiocese of Milan is  among one of the largest Diocese in the world with nearly five million Catholics and is considered the most important in Italy after Rome's diocese.

"Can young people  not talk about the indissolubility of marriage, if there is always a way to escape"

"How could we tell the young people who marry today that marriage is indissoluble, when they know that nevertheless there is always a way to escape?" Cardinal Scola brought his rejection to that point. In the direction of Cardinal Kasper the successor of Saint Ambrose said, "I can see no adequate justification for an attitude that claims on the one hand, that the indissolubility of marriage would not be discussed, but appear to deny it simultaneously through its acts."
In the same interview, Cardinal Scola insisted on the right and the duty of the Church to the society, to take a public position on critical issues: "We can not release publicly any comment." "The greatest danger" is now "through surrogacy  eliminating descent by children who are brought into the world, the orphans living parents," said the cardinal.
Text: Giuseppe Nardi
image: CR
Trans: Tancred vekron99@hotmail.com
Link to Katholisches...
AMDG
Posted by Tancred at 7:52 PM

The man who should have been Pope.

Bravo for this leader. I live I Boston in usa were our cardinal has all the backbone of a chocolate eclair.

Yes we need a real pope ! A pontiff who builds a bridge to eternity instead of one who has camped down on earth and has forgotten heaven.

Looking back, Scola was wrong about the new pontiff's agenda.