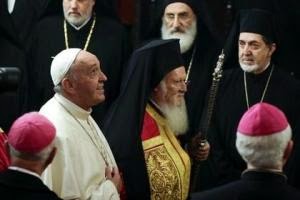 (Munich), the German Jesuit Hans Waldenfels sees in the fact that Pope Francis has prayed in the Blue Mosque in Istanbul, "an important signal" that he "welcomed".  Increasingly  " Francis qualifies the importance of theology with his gestures and his casual words," said Waldenfels and that is a good thing. "Disappointing" to  the German Jesuit, however, is the joint declaration of Pope Francis and the Ecumenical Patriarch Bartholomew.
The emeritus Bonn fundamental theologian said yesterday, according to Catholic News Agency (KNA) about the "personal interiority" Pope's prayer in a mosque: "On Muslims such gestures have a positive effect and improve the atmosphere". Now it is to be seen whether Turkey grants Christians  relief. By prayer in the Blue Mosque, says Waldfels, the Pope had "expressed great respect for the place" a sign of.
"The question whether the Pope has now prayed 'by' or 'with' the Muslims is as theologically  subtle as whether the Muslims and Christians worship the same God," said the German theologian.

Prayer in the Mosque was "Positive Sign" for Muslims, the Rest are "Niceties" 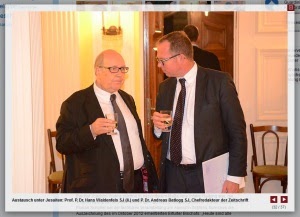 Father Hans Waldenfels (left)
Finally, says Waldenfels, as Pope Francis belongs to the Jesuit order, applies the Islamic creed "There is no God but God" just as "God is God" for Christians. The perceptions of God although different between men, still applies across all differences of time: "You can pray  everywhere."
Also encouraging for  Father Waldenfels is  that Pope Francis is qualifying the "importance" of theology "with his gestures and his casual words". The Argentine Pope ranks the practice of faith and piety with theological debates. "Theology, which is not practical, is good for nothing in his view," which had not yet been sufficiently understood only in this country.

Disappointing for  Jesuit Waldenfels on the other hand, is the joint declaration of the Pope and Ecumenical Patriarch last Sunday. It was merely, as in earlier declarations, only emphasized the  intention of unity, but it has brought nothing new.
Text: CAPE / Giuseppe Nardi
image: Asianews / Catholic Academy Bavaria (screenshot)
Trans: Tancred vekron99@hotmail.com
Link to Katholischces...
AMDG
Posted by Tancred at 5:59 PM

So much goobledygook. The lilthmus test is whether Francis's prayer partners at the mosque believe in Jesus Christ as the Way, the Truth, and the Life.
And does he?

I believe he does, but I do believe he is profoundly misguided as to what that means.

There's an obvious language barrier here because I don't understand what Hans Waldenfels is trying to say. His sentences are too broken English. But he dislikes Francis' approach...at least that's something.