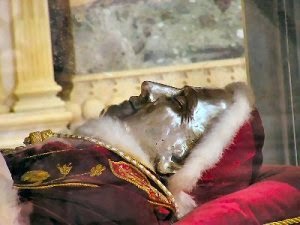 However, it has not been confirmed that the body is to be removed for a canonical investigation, which is required by   the eventual canonization of Pius IX. The late Pope has been generally given little attention. The homepage of the Basilica of San Lorenzo in Verano  offers only   a few lines that provide information about the pope buried in the Basilica.
Messa in Latino presented   the question as to whether we are dealing with an intentional  discounting of a "strong and inconvenient" Pope as was already evident before and around the beatification of the Saint in 2000.
Text: Giuseppe Nardi
image: Messa in Latino
Trans: Tancred vekron99@hotmail.com
Link to Katholisches...
AMDG
Posted by Tancred at 9:37 PM

The Immaculate Conception a holyday of obligation? Not in England it isn't and in our particular corner of the much to be celebrated (or notorious) Diocese of Arundel and Brighton they do not even have Mass to celebrate it.

Well of course not Nicolas since the official state Church is still that founded by a murderous swine who wanted a divorce. Some people there ought to be on their toes though because "when our Lord rests on our lady's lap then England will meet with a great mishap" Guess when the next time this occurs? A: 2016.

Celebrate it anyway and with much noise. I would sing Mariam hymns on the way in and out of the church and organize a procession through the streets. If there were not enough Catholics to join in I woukd do it myself.

Hurry the Triumph of the Immaculate Heart!

Thanks for this post. When I visited the basilica last October, I wondered why the relics of Bl Pius IX were no longer placed under an altar, but upon a red bier where the reliquary altar once stood.