Thanks and Solidarity for Cardinal Raymond Burke 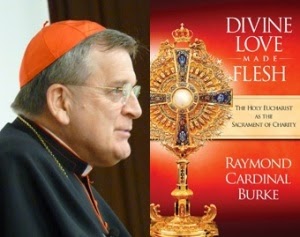 (Vatican) of thanks to deposed Cardinal Raymond Burke can be signed on the Internet online and will be forwarded to him.
Pope Francis has dismissed Cardinal Raymond Burke, Cardinal Prefect of the Supreme Tribunal of the Apostolic Signature of the Catholic Church this Saturday. Although Burke is one of the youngest cardinals of the Catholic Church, he was been reduced by the Pope to the honorific  function of a cardinal patron of the Sovereign Military Order of Malta (see  Francis the Merciless: Cardinal Burke Deposed and "Shoved Off" to  Order of Malta ).
At the same time, the previous Secretary of State of the Holy See, Msgr. Dominique Mamberti was appointed as the new prefect of the Apostolic Signatura. About two line-up changes had already been speculated in the past (see New "Foreign Minister" in the Vatican - More Line-up Changes, Pope Francis ).
For those who would like to thank Cardinal Burke  for his recent service  may do so  on the dedicated page of LifeSiteNews. The right to life site has  a "Thank Cardinal Burke for his Vatican service: sign the petition"  which will be presented to the Cardinal on the Internet, which can be signed on line. It's a  vote of thanks, but  it is also a form of expression of solidarity to an upright fighter for the cause of God and of the Church.
Text: Giuseppe Nardi
image: CR
Trans: Tancred vekron99@hotmail.com
Link to Katholisches...
AMDG
Posted by Tancred at 6:02 PM

Deratzingerization this is the real word , it's not an affront to the traditon, it is an affront to the former pope who unfotunately didn't die at the right time,no, he's still alive and they're destroying every trace of his pontificate, what a shameless show of RCC, worse actors, obscene acts of dictatorship, Adolf couldn't do better anyway....let's wait and see, the worst is yet to come. God bless+

Help O Lord! Save us from Pope Francis!!!!

Cardinal Burke has said only a relatively few Latin Masses. This doers not make him a traditionalist. He has spent virtually the whole of his ecclesiastical career being a liberal modernist. the problem in the contemporary church is that many so-called traditional Catholics msitake a few dalmatics for Sacred Tradition. Such is the systemic ignorance in the modern church. Moreover, it needs repeating that benedict XVI did not save the church because he intended to hybridise the liturgy in favour of a unique form, thus effectively & finally abrogating The Latin Mass. I doubt if Cardinal Burke would have isolated himself to defend that. let us get feet back on the ground and stop the pretense.