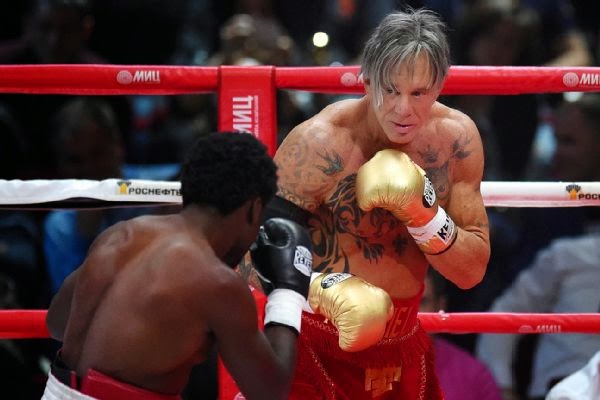 MOSCOW -- We're always encouraging fellow Catholics to keep physically fit and militant.  Mickey Rourke isn't an exemplary Catholic, but he seems sincere, and he is setting an example.

Hollywood actor Mickey Rourke returned to the boxing ring Friday at the age of 62, defeating a fighter less than half his age in an exhibition bout.

Rourke sent 29-year-old Pasadena, California, native Elliot Seymour to the canvas twice in the second round before the referee stopped the fight.

Rourke prepared in a dressing room in front of a shrine featuring candles, images of saints, and photographs of his dogs. He said he had been in mourning for his recently deceased Chihuahua.

He took to the ring in a Stetson hat, a red-and-gold robe and shiny gold gloves, repeatedly crossing himself.

Well, if fe is portrayed as at least a halfway decent man this may be good. But if he is a womanizer or shown in homo pervert scenes then it is just more attempt of an evil film industry to mock and smear the Christian Faith. Sort of like that blonde apostate slut singer and dancer who wears a crucifix around her neck or when Latino criminals sport a rosary atop their gang tatoos.

I think his attitude toward Catholicism is typical of a lot of East Coast guys from ethnic neighborhoods. He knows it's true, but he likes a lot of the things which come with Hollywood.

Fyi, he's been in trouble with the powers that be for his "homophobia" before.

I am an "ethnic" Midwestern Catholic and knew no one like this, at least not Polish, Italian, Irish, Croat, Albanian, or 15th generation French. Neither did I meet anyone like that in New York City when I lived there a while in the 80's. Most of the east coast Catholic ethnics I am acquainted with have lost the Faith. And I am acquainted with tons of Mexicans with Rosaries on the rear view mirror.

MO'R seems more like a well-meaning "lost soul" still trying to find his way. I'll pray for him, Tancred, you have a good instinct for these things.

I've met tough guys who astonish me by saying things like, "yeah, I know, I need to get back to church."

But I had a friend who went door to door, evangelizing as a Catholic friar, and that was his impression of the Italian-American Catholics, at least, himself being a kid who stole cars from da Bronx.

Wow, I'm surprised he went back into the ring at age 62. Obviously the real 'Rocky' here!

Dear Mr Rourke, when you die and go to judgement, I'm sure your face will be beautiful again. (I think he's had plastic surgery.) God bless him.

I became interested in Mickey Rourke's story when he made his comeback film "The Wrestler". Rourke was a huge Hollywood star in the 80's then, shallow garbage industry that it is, it threw him out like yesterday's newspaper. He became a homeless drifter, once Sylvester Stallone saw him at a store in LA and loaned him some money. Somewhere along the way he met a priest who helped hm through this low point in his life and when somehow, on a whim he was given another shot in his chosen profession (in 2008's The Wrestler) he talked only about his love for his faith and his dogs which had been there for him through the valley of the shadow.

I'm not sure if he's discovered the TLM, I hope so because you can't get far (if at all) spiritually in the NO but it looks like some saints have grab a hold of him now and are helping him.

Thank you for posting about MANLY Catholics- a lost art . Please post more on this subject

Many Catholics fall into this category. I believe there are well-meaning Catholics who believe they are doing good, but truly do not know all there is to the faith. They are sincere and trying, but because of the watered-down faith that has been given to us over the last 30-40 years, we have been wandering. But God is true and He will reach out to those who truly seek Him and the True Faith. For many years, I considered myself a good Catholic. In many ways I was, but until last year, I had no idea what God truly expects from us. We've been blinded by our culture and the Church has failed in teaching the faith. Thank God for Internet, otherwise I would have not discovered the The Mass of All Ages. Our merciful God is waking up Catholics who have been asleep and he is enlightening those who have been robbed of knowing the Truth.

I hold the sedevacantist position.When I pray in Latin before lunch, my 2 vatican 2 coworkers look at me like an alien.The average 'catholic' in the midwest/south has lost the faith.Please pray for a true catholic renaissance in North America.

I, also, got interested in him after the movie "The Wrestler." I was won over to him and didn't even understand myself. I suppose he expresses what many of us have going on inside...first love of faith, then the real world interferes, we wrestle with angels and devils, and even if we win, to some we are losers. Thank God only our Heavenly Father is the real judge...this world will go by and as a star implodes and takes all with it, so will the world...we are heaven's dust.,