Followup On St. John's Abbey: Indifference at the Nunciature 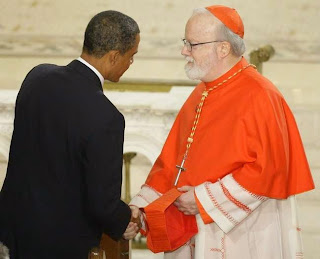 Edit: as Cardinal Sean wrings his hands about Bishop Finn in Kansas City and demands an accounting, firing warning shots, there's a Monastery in the Midwest with hundreds of victims and probably the highest concentration of sexual predators in the world. One reader writes that he has contacted the Nuncio in Washington, has contacted the local ordinary, the Abbot, and the Bishop of St. Cloud (Himself a St. John's byproduct). Despite contacting them on two occasions, including letters, he has received no answer, no response to his letters, just silence and nothing changes.

But Cardinal Sean is rooting for women's ordination.

I have written the Vatican Embassy more than once, but never gotten a response.

Since you posted up the phone number, I called Washington today asking to speak to a staff member about the need to investigate the monks of St. John's Abbey. It seems impossible to get past the receptionist. She put me on hold for a long time, and when she came back she assured me my most recent e-mail of complaint had been received and was being reviewed, but that no staff member was available to visit with me. She also refused to put me on hold when I said I would wait to talk with someone about the history of the monks theological, liturgical, and sexual abuses, claiming that I had called an embassy, not a hotline; she told me I was free to call back, but the situation would remain the same.

Why does the phone number exist if all you can speak to is a deflecting receptionist? Why can't we call our Church leaders in Washington to express fears and indignation? Why won't they ever even write me back, or even acknowledge in writing they have received my correspondence?

Why does the same thing happen when I've written the last two bishops of the St. Cloud Diocese about the monks, the OSB nuns who preach daily at Mass, about the deteriorating Catholic ethos at the College of St. Benedict and St. John's University?

Cardinal Sean is a slime ball.

Yes, Cardinal Sean is worthless. The good thing is he's only got 5 years left in Boston. He's ruined the Church there.
I did alittle research into St. John;s Abbey. There were almost 400 monks there before Vatican II. It was know as somewhat liberal even before the Council.
But today, as a seedbed of liturgical decadence and corruption and immorality of religious life, dissent and heterodoxy, there are less than 80 pries-monks left with a median age of 74, only 37 brothers with the same average age, 1 deacon, 1 junior professed, and 1 novice ! Which brings a total of about 120 or so monks.
It is still the 2nd largest Benedictine monastery in the USA (largest is St. Vincent's Archabbey in Latrobe, Pa which has it's own problems...not as bad as St. John's though).
I'd give St. John's and its community of pervert/gay /pedophile priests and brothers another five years before the place is so diminished that it's totally irrelevant.
Fortunatly, that has already happened to nearly 100% of the female communities of sisters belonging to the LCWR !!!!

Good points, but we shouldn't have to wait for discipline from the Church, especially when they're trying to show how concerned they are by attacking conservative senior clergy who have relatively far fewer problems than these people.

I suggest that your 'anonymous contributor' - and everyone else - get a copy of "The Loyolas and the Cabots" and see that this is the standard operating procedure of Chancellories and Embassies since at least the 1950's when dealing with real Catholics.

That's a fantastic book, and an excellent suggestion!

Please see these links for vital info on Cardinal O'Malley

Isn't it obvious that the doctrinal change agents are currying favor with the press so they will defend the effective changes in doctrine?

The press will cast those who changed doctrine as calm, reasonable, wise, and compassionate while those who defend doctrine will be cast as Francis' right wing wing-nut rad-trad angry base who will have nowhere to go