Cardinal Burke: Appeal to Pope Francis -- No More Controversial Themes Taken Up at Synod in 2015 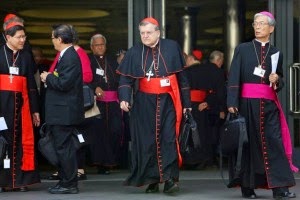 (Dublin / Rome) Cardinal Raymond Burke,  who was removed by Pope Francis for his opposition to the papal agenda as Cardinal Prefect of the Apostolic Signatura discontinued and removed from the Roman Curia, spoke on the 15th of November at a meeting in Limerick, Ireland.
Cardinal Burke reiterated his concerns at the meeting of the Synod of Bishops on the family, which began in October 2015. Through his dismissal, Pope Francis saw to it that the American Cardinal can no longer participate ex officio at the upcoming Synod.
Cardinal Burke recalled that the attacks on the sacrament of marriage come from within the Catholic Church. One part of leadership was trying to abuse the Synod to make behavior socially acceptable, "which contradicts  Catholic doctrine".
Cardinal Burke appealed to Pope Francis, to renounce the further handling of the controversial issues at the Synod in 2015. He also urged the faithful to write their bishops and the Pope. You should insist on defending the Catholic doctrine and you should prompt bishops and Pope to prevent a further spreading of the confusion.
At the meeting was also Father Marcel Guarnizo who participated as a speaker. Father Guarnizo was pastor in Maryland in the United States of the Archdiocese of Washington when he was reprimanded  in 2012 when he refused a self-confessed lesbian  Communion. The complaint was issued after because of the refusal launched a bitter aberrosexual campaign against the Catholic priest and which was fanned by influential left-wing liberal media.
Text: Giuseppe Nardi
image: Chiesa e Postconcilio
Trans: Tancred vekron99@hotmail.com
Link to Katholisches...
AMDG
Posted by Tancred at 5:14 PM

I wish raymond burke would leave the vatican 2 sect and receive ordination/consecration in the pre-june 1968 rite from a traditional bishop.