The Memoirs of Cardinal Bertone -- Does the Ex-Secretary Want to Pluck Some Hens? 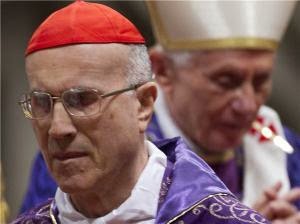 (Rome) The former Cardinal Secretary of State Tarcisio Cardinal Bertone, who was not confirmed in his office by Pope Francis,  has written  his memoirs. "He writes calmly and with precision, but it is for sure - say people who are close to him - that he would pluck some hens," said Vaticanist Marco Tosatti.
Cardinal Bertone has not only been removed from his office by Pope Francis. The reigning Pope has appointed Bertone's predecessor, the Anti-Ratzinger, Angelo Cardinal Sodano himself, to the recently concluded Synod of Bishops on the family, but not Bertone who is too close to Ratzinger.

Considerable Part of the Criticism of Bertone Affirmed Benedict XVI.

Throughout his tenure, Cardinal Bertone has faced heavy bombardment. Contributed to by his own weaknesses in the quality of his leadership, but especially the enmity of Cardinal Sodano and his followers, who could never live down his deposition by Pope Benedict XVI.  The church circles that increasingly felt Benedict XVI. was a burden, but did not dare to criticize the Pope, fired  more eagerly at the Cardinal Secretary of State.
The internal tug of war went so far that a group of cardinals, two years before the resignation of Benedict XVI. called for the dismissal  of Bertone. A claim that contradicted the German Pope's understanding of  loyalty, "although he was not always happy about the work of his most important representative, he defended him," said Tosatti. Bertone Secretary of the Congregation 1995-2002 during Joseph Cardinal Ratzinger's tenure as its Prefect. In the same year he was named by Pope John Paul II. as Archbishop of Genoa.  When Pope Joseph Ratzinger was elected, he picked him in 2006 as Cardinal Secretary of State in the Vatican, because he trusted his long-time employees.

"Victims of Moles and Snakes"

Benedict XVI. should have understood that the growing  pressure being directed at the Cardinal Secretary of State, was in reality meant for him. This led to the unusual situation that a pope had to defend his Secretary of State, who would have had actually to defend the Pope. A skewed situation that did not make the Pontificate of Benedict XVI any easier.
Cardinal Bertone, who speaks very good German, has been writing his memoirs since his retirement as Secretary of State. It should have  been replaced already on 15 August 2013, but this has dragged on due to the health problems of his successor, Cardinal Pietro Parolin, until 15 October.  "It is very well documented and follows a precise calendar in which  his meetings, talks and discussion topics were posted every day," said Tosatti.
The literary genre of memoir is rare, especially when a Cardinal Secretary of State picks up his pen and writes about his work in the vicinity of the then reigning Pope. To be precise, there is still be no precedent for it. The Cardinal in certain circumstances seems to be directly focused on  relating  the attacks against his person and with his retirement. At that time, Bertone spoke of being the victim of "moles and snakes".
Text: Giuseppe Nardi
image: La Stampa (Screenshot)
Trans: Tancred vekron99@hotmail.com
Link to Katholisches...
AMGD
Posted by Tancred at 8:47 PM

Dirty Bertone, the Third Secret suppressor? Maybe Francis and friends will retaliate with their writings and interviews. I hope they all cannibalize each other.

The real problem is that ++ Sodano never went away, and he's still there in the same place, more powerful than ever.....intelligenti pauca.Kris Marlowe

Sodano - the key and consistently present figure. This is a man who knows much more about the rotting NO system than we can ever think. In fact, I would estimate that at certain times he is the most powerful person in The Vatican. We can see just how negligent JP II was to keep flying off all over the world when he should have spent more time in Rome dealing with disciplinary matters - abusive clergy; financial corruption; Vatican Bank money-laundering; masonic infiltration; declining vocations; rampant liturgical abuse (die to his inculturation policies) and, oh yes, and Sodano.

+Bertone could have defended Benedict XVI more fervently and actively against the wolves but he did not. He let him hang to dry...thus the resignation....thus the triumph of the homoheresy....thus the swift election of the reigning modernist pope....thus the manipulated and farce Sin-Nod....etcetera....ad nauseam......

Maybe he was afraid of assassination. (Sarcasm)

There are worse things than your own personal death.

That, or something that rhymes with it, if his colleagues are anything to go by.

I wonder is Our Lady of Fatima will appear at one of his book signings.

Any enemy of Sodano must be doing something right.