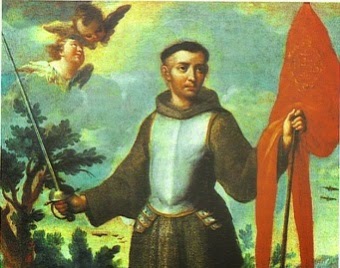 Edit: on July 22nd, Catholic and auxiliary troops, led by St. John Capistrano, defeated the Turk at the siege of Budapest in 1456.  The seemingly invincible Turks were fresh from the disastrous fall of Constantinople, and were poised to conquer Hungary, and advance beyond.  Today is St. John Capistrano's feast!

It's also the anniversary of the 1956 uprising in Hungary against another perfidious foe, the Soviets.

These heroes of the past will be a flame to kindle the hearts of the heroes, martyrs and saints of the future.

This hero fought for Jesus Christ, our true King; what would St. John say to how Muslims now entering freely in churches, and coward bishops who hide behind "charity" and "mercy".

St. John Capistran, and other saints like St. Lawrence Brindisi knew mercy, and their most Catholic band of warriors showed it by destroying the enemy of the Faith, not appeasing or flattering, or glad-handing with them.

By current liberal modernist standards he must appear too "islamophobic" for their cowardly amoral ecumenical indifference.