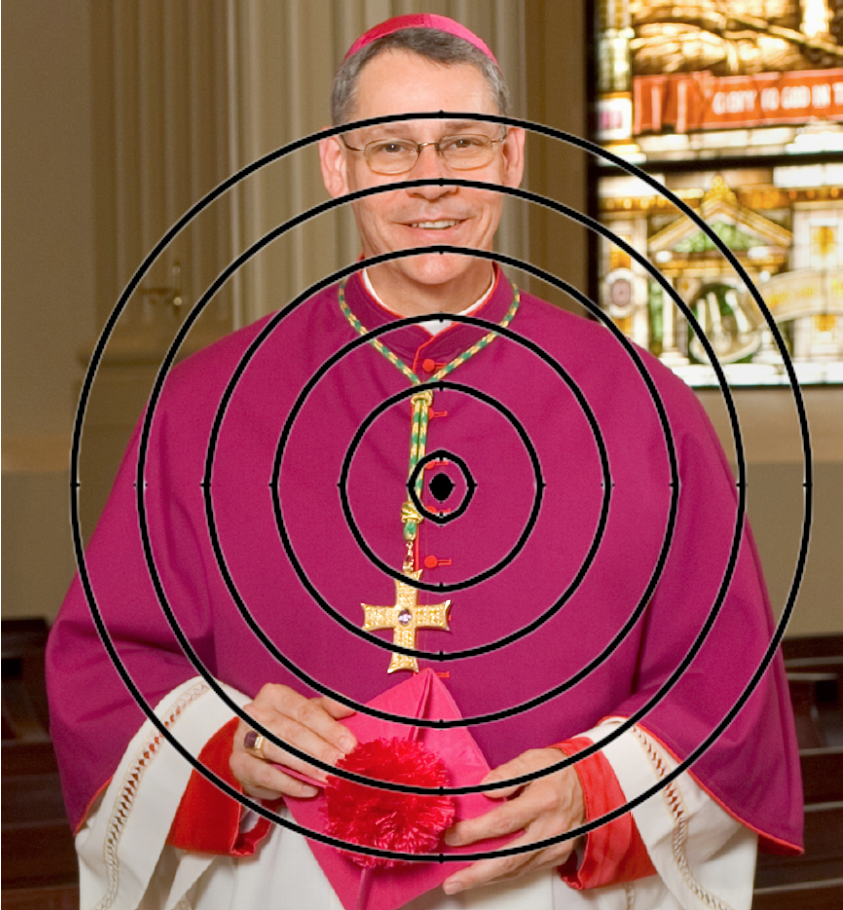 THANK YOU FOR THIS!!! We need the Truth. This is the third bishop just THIS MONTH, after Burke and Liviere. Who else like Francis is standing behind this! What a sneaky and vile way to do his dirty job... I am terrified for what is coming...


Saint Athanasius,
Feast day of worth
On the second of May
The month of great mirth.


Out in the deserts –
As history has charted –
You preserved the true Mass
Great lion-hearted.


Now Lefebvre
And the sixties egalitarians
Like Athanasius,
His time his Arians.


For He who abolished
Death by death
Sent him to absolve
Sin width and breadth.

That's good in theory long skirts but why is the sspx leadership so keen on linking up with the bergoglio newchurch now? What's the rush? New Church will implode in a few years what's the great emergency to join now? Leave us the lifeboats that Saint Lefebvre gave us, don't go paddling them back over and tying them up to the titanic. But then I'm just an ignorant lay man, perhaps there is something I don't know.

I wonder if he'll answer you in verse!

This is absolutely diabolical! How else can the Church be ripped apart?

The North Vietnamese Communists, for example, had two sections: one to fight the violent war, and the other to destabilize the government from within through muckraking, disinformation, bringing up allegations, and generally sowing the seed of mistrust in the leaders.

I feel that Satan is using the same tactics: you have from the outside, Islam, FEMEN, Richard Dawkins, and other outspoken enemies of the Church. And then inside, we have to look at our fellow Catholics and wonder...

A fronte praecipitium, a tergo lupi.

Who is this Bishop Pendergrast? Anyone know?

+ Prendergast is the Archbishop of Ottawa, Canada. He's actually a very decent man; kind and balanced in every way. I'd trust him to make a good judgement of the situation.

Wouldn't be this Jesuit Prendergast by any chance?

"Ottawa Archbishop Terrence Prendergast, who was Bishop Lahey’s met-ropolitan when he was Halifax archbishop, issued a statement Oct. 8, saying he had offered the bishop a place to stay since he had nowhere else to go."
http://www.thecasket.ca/archives/1030
http://www.thestar.com/news/canada/2009/10/10/after_protests_in_nb_town_bishop_to_live_in_ottawa.html

Rosica --Francis' new publicity man in the Vatican was also involved in whitewashing Lahey pedophilia (known about for 20 years):
"Reading the quote from Fr. Rosica above, you'd almost think that the Canadian Church has it all figured out and that sexual scandals are a thing of the past."
http://catholic-dialogue.blogspot.com/2009/10/canadian-bishops-being-too-self.html

2008: for at least this year Lahey and Archbishop Terrence Prendergast served as a Consultants to the CCCB’s Episcopal Commission for Liturgy
http://www.theinquiry.ca/wordpress/charged/bishop-raymond-lahey/

In my view both Prendergast and Rosica should be investigated and removed for their role in protecting high ranking pedophile Lahey -- instead of being used to investigate (baseball bat) anyone!

As for what's up with Fellay...he's always been clear that if the Pope calls - the Society still recognizes him as the Pope, after all, on paper - he'll pick up the phone.

But he also knows that he'll lose - at a minimum - half the Society with even the most generous deal under this Pontificate. Therefore, it's extremely hard to believe that he's in any hurry to do anything.

Bishop Lahey pedophile??? I think NOT... What kind of proof do you have? Bishop Lahey was a strong Marian priest with a stamina to fight church establishment. He openly led many pilgrimages to Mejugorie, distributed thousands of rosaries, openly protected prophecies of Vassula Ryden or Barnaba from Nigeria. Bishops who are pedophiles do not care about Mother Mary nor Church prophecies...

"That's good in theory long skirts but why is the sspx leadership so keen on linking up with the bergoglio newchurch now? What's the rush?"

"Rush?" the SSPX has been called to Rome many, many times over the last several decades as they are True Roman Catholics and do as the Archbishop did...when called, they go. They are tethered in Tradition to the Barque of Peter, in the life-boats, perhaps, but "supplied" with life-jackets of "jurisdiction" ready to take on any soul thrown overboard by the mutinous-men trying to sink the Barque. They continue to hand down what was handed down to them by Our Lord as Archbishop Lefebvre did. They preserve the WHOLE Faith and by the grace of God will someday steer the Barque into safe port. The mutinous-men are Pirates and as the Society Priesthood grows and stays the course these Pirates will be defeated. The mutiny continues telling souls to "walk the plank...but whatever you do don't get in the SSPX lifeboats" and souls obey these Pirates and are the portions of sharks...

Up the raging Mississip
And at the St. Paul’s source
South, below the ragged cliffs
There is a fiercer force.

A force which surges
Human blood between her banks each June
Then tears and rents herself for all
She is…Winona’s womb!

And like the raging Mississip
Her channels open wide
And birth the men who are the priests
The source of Mother’s pride.

And from that raging Mississip
And at that St. Paul’s source
South below the ragged cliffs
Push priests from land of Norse.

Who ride the river far and wide
For souls from shore to shore
And bring them home to Mother’s side
To leave Her never more.

And up where current’s all the rage
And sin is sorrow’s source
Still south, below the ragged cliffs
WINONA STAYS THE COURSE!!!

Well, then this is a case of mistaken identity. I am speaking of Bishop LaCey... not LaHey! This one: http://www.spiritdaily.net/lacey.htm
That is clearly my own mistake. If I can say, I "hate" English for that. Pronunciation is so close and just one letter can make an angel into a devil and vice versa... I am sorry for that!

"Lahey, who once negotiated a $13-million settlement for victims of child sex abuse by priests as the bishop of Antigonish, N.S., pleaded guilty in May to possession of child pornography for the purpose of importation.

However a leading children’s rights activist said Wednesday that the 15-month sentence did not reflect the seriousness of the crime.

If the children in those images could have stood in the court room perhaps the sentence would have been tougher.

“No one would be making child pornography if there wasn’t demand and what people like Lahey do is create the demand”, Ms Proger said.

Lahey had been returning from a trip abroad when customs agents checked his laptop computer and found images which included young boys and teens engaged in sex acts including bondage and torture.

Police discovered 588 child pornography images along with 63 videos and several stories with themes of slavery.

The child pornography made up only a small percentage of the approximately 155,000 pictures of pornography he had on the computer.

Bp Finn prays the Rosary before the abortions centers?
Yes, this man is very dangerous...

If Bishop Finn, had done the right thing and resigned for his failures in handling the sex abuse crisis, Pope Benedict could have appointed an orthodox bishop without all the baggage.

Pope Francis has only been able to get rid of the orthodox bishops who failed in their duties and rightly should have been removed. Pope Francis has a fair excuse to go after them, even though he really is going after their orthodoxy.

You don't see Francis going after Sample in Portland or Morlino in Madison. He has no right or excuse to. They haven't been convicted of a crime in court or sheltered a notorious Homosexual predator.

How did Finn fail to handle the abuse crisis again?

He didn't need an excuse to go after the FFI.

Pope Francis has sheltered a notorious sexual predator (Ricca) and promoted another one who did the same (Daneels), but that don't matter.

Finn's criminal negligence is all found in the independent report commissioned by the diocese called the Graves Report. There is just too much to go into, but briefly there was: Finn ignoring the letter sent to him by a Catholic school warning him about Fr. Ratigan. Finn destroying evidence by giving the computer with hundreds of pornographic pictures to Ratigan's family member who destroyed it. A diocene employee who told Finn to his face to call the police once the pictures were discovered and he did not do so. Finn sending Ratigan to a retreat center, where there was acess to children. He didn't tell the families of the victims anything or seek them out, and then there was his conduct after he was caught. He spent over a million dollars defending himself from a misdemeanor that wouldn't have sent him to jail. Spending money from the diocese, parishes, and families, knowing full well he was guilty, and of course convicted. In the end, he also avoided conviction in another county by having the state take over control of the Church in a review process.

Sorry bro, I looked around for where he is alleged to have destroyed evidence.