Isabella I. "the Catholic" -- Cardinal Lustiger Blocked Her Beatification?

(Madrid) The emancipatory Zeitgeist has ignored the numerous and grand Catholic, female figures. Perhaps that is because while it is indeed feminist, but not very  female friendly? Among the women who are ignored by the liberal historiography, is Isabella I "the Catholic" of Castile. In Catholic Spain through the ages she has been venerated as the  "gran reina de la madre patria"  (Great  Queen of the Fatherland), while  political opponents and later Protestant anti-Catholics caricatured her.
It was the anti-Spanish Leyenda Negra (black legend), that has  darkened her memory since the 16th century by insinuations and untruths in Europe. A blackout that until now prevented her beatification, although she "deserves far more than others," this, as the Argentine priest, Javier Olivera-Ravasi, founded the order in Argentina beginning in 1984,  Institutum verb Incarnatum (Institute of the Incarnate Word, IVE) as InfoCatolica writes. Currently Father Olivera is working his way on his dissertation in history about the counter-revolution of the Mexican Cristeros .

Why this aversion to the Catholic queen?

"Why this angry aversion," asks Olivera Father. Because the Queen in the eyes "of those who rule the world today, is guilty of  four unforgivable deeds":
Is the ideological and pseudo-historical veil beginning  to lift, which has been placed over this queen? Is her public perception corrected? "We hope so, even though she does not need it. But we need it to be able to  hope to one day say: Sancta Isabella, ora pro nobis"  says Father Olivera.
Religion en Libertad  conducted an interview of   the non-fiction author José Maria Zavala, a proven expert in this historical figure of world renown. Zavala, who studied Communication Sciences at the University of Navarra and made ​​a name as a business journalist, is interested in  Spanish history, on which he published more than 30 books. He has just released his new book Isabel intima. Las Armas de la mujer mas y reina de la historia de España celebre (Isabella. The Armory of the Most Famous Wife and Queen of Spanish History, Planeta Publishing 2014, 352 pages). Zavala evaluated the records of the blocked beatification process for the Queen of Spain and presented a book that "smashed" the "Black Legend" against the Catholic Queen ( InfoCatolica ).
.

"John Paul II. Wanted to Beatify Isabella, but Lustiger Was Definitively Against" 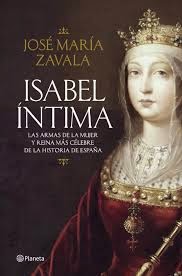 There should be a movie on her life.

William Thomas Walsh's bio of her is fantastic