Archbishop Negri: Dialog May Not Be an "Unconditional Capitulation" and Not "Empty Talk"

(Rome) Already for several days a large banner has been hanging in the middle of the northern Italian city of Ferrara,  with the Arabic letter N for Nazarene. With this symbol, the Islamists in northern Iraq label the homes of Christians who are who are to be driven out.  The banner with the prominent announcement on the fate of persecuted Christians in the Middle East hangs on the main square of the city on the facade of the Archbishop's Palace. The reason for the display is the contentious Archbishop of Ferrara, Msgr. Luigi Negri, one of the most prominent Catholic bishops in Europe.  From August 15, the Solemnity of the Assumption of Mary into heaven, the Italian Bishops' Conference had declared a day of prayer for the persecuted Christians of the Middle East.
On August 14, Archbishop Negri published on the Solemnity of the Assumption a pastoral letter to the persecuted Christians. Here are some excerpts:
"The  meaning of this brand is that it represents the first letter of the word Nassarah (Nazarene), the word with which the Quran refers to the disciples of Jesus of Nazareth - that is imposed by the militias of the self-proclaimed Caliph al-Baghdadi on infidel Christians, for the there is no place in the Islamic State in Iraq and the Levant, except to convert to Islam, who are subject to a head tax, and suffer the destruction of their ancient places of worship and the confiscation of their goods - want to express publicly that the Archdiocese of Ferrara- Comacchio feels as  one  with our brothers and sisters who bear the wounds of the suffering and death of our Lord on their bodies and in their souls. 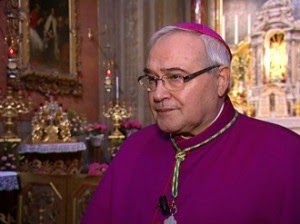 Archbishop Luigi Negri of Ferrara: "No dialogue at all costs"
"While we prepare for the Day of Prayer (August 15),for the coming of peace  - or better it could be said that the Lord Jesus Christ will perform a miracle for it,  that humanly speaking is not the least hope  - I want that  the entire diocese would perceive, what Pope Francis has repeatedly asked that it is not just the "saying" of a prayer, but a prayer with the wholeness of life and of the heart. That it is mainly a plea for forgiveness from Him, because our lives as Western Christians shares guilt as a co-responsibility for what is  happening.
This responsibility comes with a naivete expressed, that is to say the least, pathologically. One must speak of dialogue, sure, but you should and can do so only if one is aware of the identity and the complexity of the conversation partner. There can not be in any case  a dialogue at all costs and it can not mean a withdrawal of Christians from the Middle East completely.
It would be our desire to be there with them, to strengthen the numerical presence of Christians in the places where the Church and Christians have been present for two thousand years and to be prosecuted with them. Let us ask the Lord that He makes us able to build an intelligent dialogue, to guide and not an unconditional surrender. And we ask the Lord also that He grants us to stop not only the flight of thousands and thousands of our brothers and sisters whose guilt is only to be Christians like the first martyrs, but as far as possible, to strengthen their presence there, as they can not be valued differently than as a fundamental contribution to the common good of all mankind. This is the authentic way to pray for the peace that is a gift of the Risen Christ, 'Peace be with you '. Everything else is just empty talk. The Church needs no empty talk and, as far as I know, even God does not need it. "
+ Luigi Negri
Archbishop of Ferrara-Comacchio and Abbot of Pomposa
Introduction / Translation: Giuseppe Nardi
image: Asianews / Archdiocese of Ferrara
Trans: Tancred vekron99@hotmail.com
Link to Katholisches...
AMGD

Is it Christendom's battleplan to talk the Jihadi to death?

Maybe they'll realize the error of their ways, and set aside their rocket launchers and all will decide to get baptized, and we can all have gelato later.

The only solution to ISIS, indeed, to the whole of Islam, is WAR. A Just War. A righteous war. A war for the sake of the honor of Our Lord Jesus Christ and His Church. Indeed, in the Old Testament, our God commanded we make war against the unjust people; He Himself struck at Egypt's firstborn! To say that God is evil because of this righteous act is blasphemy!

Indeed, it is blasphemous of the Muslims to deny the divinity of Christ, and in establishing their counterfeit religion. Because the only language they understand is that of the sword, we are OBLIGATED, to bring justice unto them!

The only real obstacle is the secular powers of the West. The softness caused by materialism has sapped Christendom's resolve to persevere against the infidel and to either convert him or kill him justly. This softness has allowed all sort of perversity that does not challenge us but let us wallow in our defects and lets us tell ourselves that we're fine the way we are, the way things are.

It is almost a relief to see a Western churchman, an archbishop in Italy no less, has a firm grip on reality and appreciates the extreme danger militant Islam presents to Christianity and the whole of Europe.
During a brief to Ferrara a few years ago I got the distinct impression the city is a hotbed of leftism, so we can expect the good archbishop to be under considerable pressure to 'recant' and embrace the falsity of political correctness.

Our parish priest, Fr Lucchesi of Carnoux-en- Provence (France) just hung a similar banner on his church's façade displaying the arabic 'noun" with that comment on the bottom: "We are all Nazrani (christians)".
A wake up call for a crusade?

While not denying the need for a more potent response to Islam, "convert them or kill them justly" has never been an acceptable proposition in Christendom, not even during the original Crusades.

An even more sinister threat to the Catholic Faith then Islam is been told by your Spiritual leader ,it doesn't matter what God you believe in ,at least radical Islamic s give people a straight choice ,as opposed to the insidious dismantling of the Faith by those who would strip Christ of his Divinity and Kingship ,and deny his Real Presence in the Blessed Sacrament.As Christ said "Do not fear those who can kill the body,rather fear him who can destroy both body and soul in Hell

I have and idea lets send Card. Kasper to dialoge with these devils. Only trouble they may convert him because , I do not think he is a catholic anymore.

It is the task of the soldier to kill or to die. To do so for Christendom is righteous!

Of course, no one should be forced to kill in the name of God- but what do you call Muslim aggression as anything but forcing the hand of the non-Muslim to rise and strike them until they are no more?

Everyday, a Muslim child is trained to handle an AK-47. Everyday, they are taught that their destiny is to raise the banner of Islam in Paris, London, Vienna, and even the Vatican.

In fact, I think even adults are ignorant, thanks to the godless media: If you are unaware, then you cannot care.

The rise of the turk has always been a chastisement from God. We will not succeed against islam by venting our wrath, but by personal repentance and conversion. That was required before all of the major victories against islam (Under Don Juan of Austria, Jan Sobieski, and Charles Martel).

This rise of islam has been prophesied. They will rise up, commit many atrocities, and will have some success in battle, but will be defeated and converted. You can find this in any book of Catholic prophecy.

We shouldn't rely on 'prophecy' but on preparing ourselves and our beloved grandchildren for the contest to come!
Of course personal repentance is VERY important. The great Austrian general Prince Eugene, (he is buried in Vienna's St Stephen Cathedral), was raised in the totally corrupt court of Louis XIV. After conversion and repentance he left France and distinguished himself in the service of Austria against moslem aggression.