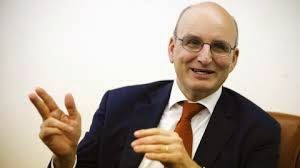 While the Vatican Bank is almost in the black, the Holy See ran in 2013 into the red. Although the Vatican Bank contributed 150 million euros to the Holy See, the first year of the pontificate of Pope Francis ended with a loss of 24.5 million euros.
This included the Peter's Pence for the 2013 of $ 78 million in donations for the Holy See, while  last year with Pope Benedict XVI. it was only 65.9 million. The best result has been achieved in 2009 with 82.5 million. This was according to a statement by Archbishop Angelo Becciu, substitute of the Cardinal Secretary of State on 28 June in an interview for the newspaper Avvenire.
Text: Settimo Cielo / Giuseppe Nardi
image: Settimo Cielo
Trans: Tancred vekron99@hotmail.com
Link to Katholisches…
AMGD
Posted by Tancred at 12:43 AM