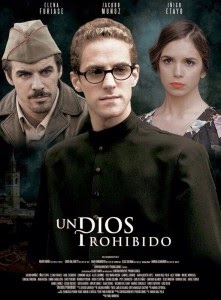 (Rome) The feature film "Un Dios Prohibido" (A Forbidden God) by Spanish director Pablo Moreno was honored at the 5th International Catholic Film Festival Mirabile Dictu for "Best Film" award and was awarded the "Silver Fish 2014". The award ceremony took place on June 26 in Santo Spirito in Sassia in Rome.

The "Silver Fish" is reminiscent of one of the oldest Christian symbols.   The award was presented by director and film producer Liana Marabini,  president and founder of the International Catholic Film Festival. The aim of the festival is to give space and visibility to  producers and directors of feature films, documentaries, docu-fiction, television series and short films, to promote  the "positive models and universal moral values”  which are therefore consistent with Christianity.


More than 1,600 Catholic productions from 120 countries took part in this year's Festival and competed for one of the seven prizes awarded. An international jury in 2014, chaired by the Austrian producer Norbert Blecha, assessed the submitted projects and awarded prizes for Best Film, Best Documentary, Best Short Film, Best Actor and Best Director.

The "Silver Fish” for 2014’s "Best Film” which was the Spanish feature film "Un Dios prohibido" was excellent. The film tells the true story of 51 Catholic martyrs who were killed during the Spanish Civil War by Anarcho-Communists. The historical facts took place in August 1936 soon after the outbreak of the conflict in the wake of the April 14, 1931 proclamation of the so-called Second Republic of Spain, a freedom-destroying Popular Front regime, which began a brutal persecution of the Catholic Church.


"Un Dios prohibido": Is The Story of the Murder of 51 Missionaries in Spain


In Barbastro, a small market town in the Aragonese province of Huesca, 51 peaceful and defenseless "Sons of the Immaculate Heart of the Blessed Virgin Mary”, better known as the Heart of Mary Missionaries or Claretians 1  were killed by militia members of the ruling People's Front out of hatred for the Catholic faith. This "beautiful film,” says Corrispondenza Romana is told in a successful and touching way, about the last few weeks and heroic moments in the lives of the missionaries before their execution.

The prize for the best short film went to the Italian Alessio Rupalti. In "I Was Looking for Something Else," he tells a story about the importance of human and family relationships.


In the category of “Best Documentary Film” was the Frenchman Stèphane Ghez with the exceptional “Voyage au cuer du Vatican”. It was an extraordinary journey of discovery in the most beautiful and least known places in the Vatican. The Englishwoman Juliet Stevenson won the award of "Best Actress" for the masterful embodiment of Mother Teresa of Calcutta in the American film "The Letters". The film tells the story of the famous Albanian nun who  founded the Order of the Missionaries of Charity, which was on the basis of an exchange of letters between the sister and her spiritual advisor. "The Letters" was also awarded the prize for best director, which went to the American William Riead.

The Capax Dei Foundation also awarded a special prize to the two films, the most convincing as a means of evangelization. It is "Catholicisme", a documentary series by the American priest Robert Barron and to "L'Apôtre" (The Apostle) of the French Cheyenne Marie Carron, a film that tells the story of a young Muslim conversion to the Catholic faith.

Finally, the prize of "Friends of the Festival" award was presented for the best educational film that was named among the finalists. The prize went to the Italian, Giuseppe Tandoi for the docudrama "Nolite Timere" on the figure of Pope Celestine V.

Film Festival Is Counter-trend to the Dominant ideological Diktat

The Festival of Catholic Film "Mirabile dictu" provides a unique and valuable initiatives in the international film sector. It forms a counterpoint to the usual commercial, but also many alternative film festivals. The International Catholic Film Festival swims against the current of the ideological mainstream diktat of the prevailing culture. It represents heroic lives, values, sacrifices and the search for truth at the center. “All categories that are incomprehensible to today's thinking and out of fashion in a wealthy, relativistic society," said Lupo Gori about "Mirabile dicta".
Posted by Tancred at 11:31 PM

Powerful movie that at first was only made known by word of mouth. Later some posters and adverstisement slowly appeared. My Opus Dei friends informed me that people were weeping and Opus Dei elderly gave exasperating shouts during the course of the film. Satan threw everything at these young sems even prostitutes, fake executions, communist propaganda you name it Satan tried them and now at last their story is told.