FSSP to Take Over Baroque Church in Munich 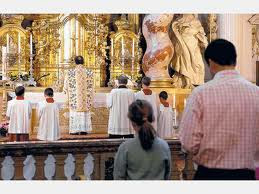 On behalf of the Archdiocese of Munich from September 1st, the complete pastoral care will be taken over the already existing for many years at the Munich Damenstiftskirche worshiping congregation from 1 September. Hl daily. Planned fairs in the old rite


Munich (kath.net) The Fraternity of Saint Peter (FSSP) will take on behalf of the Archdiocese of Munich and Freising the entire pastoral care of the Damenstiftskirche congregation from the 1st of September, which has already been existing for many years. This was announced by the community that celebrates Holy Mass in the old rite, in a press release. The Society therefore is sending a second priest to Munich, for the offering of the Holy Mass in the Extraordinary Form [Immemorial Mass of All Ages]. It is planned that a celebration of Mass in the old rite is to be offered daily.