On 8 June A Rabbi, an Imam an a Pope Will Do "Interreligious" in the Vatican: No Joke! 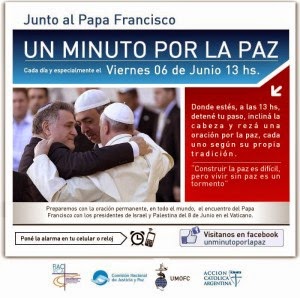 (Jerusalem / Buenos Aires) "We can go as far as we want, we can build a lot, but if we do not confess Jesus Christ, it doesn't mean a thing.  If you do not confess Jesus Christ, that brings  the words of Léon Bloy to mind: "Whoever does not pray to the Lord, prays to the devil." When one does not confess Jesus Christ, he is committed to the worldliness of the devil, the worldliness of evil." These words were uttered by Pope Francis in his first sermon as the new  head of the Catholic Church  on March 14, 2013 in celebration of the Eucharist with the Cardinals in the Sistine Chapel. Nevertheless, there will be an "inter-religious prayer" on June 8th  at the Vatican with  a Pope, rabbi and imam. How so?
There seems to be some disorientation ruling in the Catholic ranks  and  will not shake the feeling that Pope Francis is part of that.  The Catholic Action in the home country of the Pope, the National Argentine Commission for Justice and Peace , the World Union of Catholic Women's Organizations (WUCWO) and the International Forum of Catholic Action have (FIAC) for 1pm on June 6, been called to prayer under the slogan "One Minute for Peace" (see image).

The call of  an Argentine group picture in front of the Wailing Wall in Jerusalem was published. It shows Pope Francis with Rabbi Abraham Skorka and the Muslim representative Omar Abboud, both from Buenos Aires, as embracing all three. The text to image states: "Wherever are you at 1 o'clock, stay standing, incline your head, and say a prayer for peace, each in his own tradition." The reason for the call to prayer is the meeting of Israeli President Shimon Peres and Palestinian President Abu Mazen on June 8, at the Vatican, has been invited by the Pope Francis.
Taking the above-mentioned statement on the one  hand that Pope Francis made at the beginning of his pontificate, the question arises: Is it now but no matter whether you - after the Pope's words - pray to Jesus Christ or the devil? The Pope could have appealed as a mediator in the Vatican, but why the "common prayer" with Rabbi and Imam at the same time to express the inclination of a mediator?

The bi-weekly newspaper are Public Forum of the Association Church from Below (nomen est omen) is thrilled. On his travel to the Holy Land  the progressive forum on Pope Francis reports: "He makes world politics - unlike his predecessor from Bavaria. When Benedict XVI. went on trips, you had to expect that he caused  faux pas or met with outraged victims. Francis dominated the opposite. "From him there was no "insulting" Muslims expected as alleged by the Regensburg speech of Benedict XVI. No "affronting" of the Jews, as allegedly happened in Auschwitz and above all, no one would hear from Francis, that "the forebears  longed for Catholic Missionaries", as the German Pope had told the Indians of Latin America. In Publik Forum one "breathes" and s therefore  to "tolerable",  because Benedict XVI. has resigned.
The peace process in the Middle East was "dead as a doornail" as Pope Francis came. Public Forum does not forget to note that there will be "inter-faith with the Pope" prayed on June 8 at the Vatican. It also understood there will be some Argentine and international Catholic organizations. This is in fact a piece of news in the Vatican.
Text: Giuseppe Nardi
image: Un minuto por la paz
Trans: Tancred vekron99@hotmail.com
AMGD
Posted by Tancred at 5:35 PM

"I do not ask on behalf of these alone, but for those also who believe in Me through their word; that they may all be one; even as You, Father, are in Me and I in You, that they also may be in Us, so that the world may believe that You sent Me.…" John 17: 20-21

Belief in Christ Jesus is the only unity with the Father. Dilution of the Truth is the road to error most profound.

Our Faith is being sold very cheaply for peace at any price. Pope Francis is pushing for the One World Religion and the world will love how recklessly he abandons us. Meanwhile, there is no peace for the FFI/FSI and Christians are still being persecuted in the Middle East and Africa. The first Pope to love Muslims & Jews more than Catholics whom he insults constantly.

Some of us insist as always - apostasy is now a reality in a new church with a new paradigm that is not Roman Catholic. Neither is the liturgy that feeds it!

To be honest, if I were Pope, would have I have gone to the Wailing Wall after a fire was lit in the Abbey of the Dormition? What is diplomacy, what message, would I as Pope, want to convey? Quagmire, isn't it? One would want to show reconciliation to people, but at what cost? What with the blasphemy of Our Lady on Facebook, and the blasphemy in the Talmud, at what point and where, does one show respect to Our Lady who loves all her children? At what point and where do we start to say "Hey, take notice, we don't like it!"

As far as "Publik Forum" is concerned....

"From him there was no "insulting" Muslims expected as alleged by the Regensburg speech of Benedict XVI. No "affronting" of the Jews, as allegedly happened in Auschwitz and above all, no one would hear from Francis, that "the forebears longed for Catholic Missionaries", as the German Pope had told the Indians of Latin America. In Publik Forum one "breathes" and s therefore to "tolerable", because Benedict XVI. has resigned."

...This is why I love you Papa Benedict. Yay!

I don't know about you, but in that photo, I think Mr Abboud has the most dignity.

Yes, that is not a posture for the Pope to adopt in a public situation.

This is kind of like the end of "something" ...where will it all lead?

The image of a pope on a bike without brakes careering downhill and into precipice comes to my mind...

Praise to Our Lord Jesus Christ , only begotten Son of the living God and only Saviour of mankind ..and the rest are all frauds.

Here is a link to the text of most of the goings-on:

That photo compels one to say "group hug !" LOL