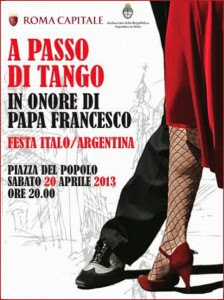 (Vienna) Horror missae potpourri. Although the Second Vatican Council gives clear instructions for the preservation and promotion of sacred music, you know how the matter has been ongoing. The question is more, how could this happen. But that is too many church leaders  are loitering around in the Council's commemorative years 2013-2015.

Not only in the church tax-financed dioceses of Hitler's Germany from Hamburg to Vienna, but also in the donation-funded dioceses in other countries things are comfortable. People donate to the church with the desire that the children learn a good Catholic education. The fulfillment of this desire is an increasing rarity. Ask yourself: In how many parishes is your diocese preparing instead for their First Communion before the introduction to the Sacrament of Penance?
Much is done in good faith, because you can not see the forest for the divine self-planted trees. This includes keeping things in the musical field, for example, a tango show in the parish Pinsdorf.

"Blessing Ceremony for Separated and Divorced"

There Gerhard Pumberger, a quite up to date pastoral assistant with a  "vision" that is of the opinion that the Church would "exclude", for example, divorced and remarried. The church newspaper wrote on that wavelength over Pumbergers "blessing ceremony for separated and divorced": He wants to compromise on the question of guilt and show that the ecclesial community excludes no one whose partnership has failed ". With a "sea of tears", "sea of rage", "sea of hope" Pumberger offers "healing rituals". It was important, says Pumberger, as a "local church human to deal with it."  This was why in the Pinsdorfer blessing celebrations he "expressly invited all to communion."  About which the editors of the church newspaper find nothing  inappropriate.

The Sinless Lives of Modern "Pastors"

"Guilt" will be "deliberately excluded" because for full-time employees of the Church like Pumberger there is no sin, because where there is no guilt, there is no sin and therefore perfect neutrality. It is only to deal with  "life situations" in which a pastor "accompanies" people as a service provider. That's what  Pumberger  should have probably learned in studying theology.
So Pumberger is also of the opinion that  in  preparing for confirmation one must "think outside the box."  He developed his own "model", whose special feature is the place an "accent on the social dimension", including a concentration camp visit to "deal with a dark chapter of history in the region." Pumberger doesn't fiddle about. He thinks in terms of "future processes" and millennia. Not those of the two thousand year history of the Church, but prophesied into the future.  In connection with the shortage of priests, he is in fact certain that "the coming millennium will be the millennium of the laity." This  "change of mentality"  is what he sees already at work. "In the parishes Teamwork is announced. The large parish boss [meaning the priest] no longer has to give it. "

Tango for the Pope or for the Creative Ego?

The Dean Franz Starlinger said  excitedly and naively as early as last January: "Why not  let a parish assistant like Gerhard Pumberger do the consecration? Then he could canonically bear full responsibility parish."  Why doesn't  Pumberger become a priest? You might ask,  however, what he would return with a list of demands. First, the church has to change their image of priesthood, celibacy anyways, then, yes ...
For Purnberger's  latest action, it will be next Pentecost for  the Holy Mass, the tanGO-Liturgy to shake things called a tango. And he has invited a couple that one can perform a very good tango. What the dance has lost "during the service," is  completed by the parish assistant Pumberger. Not particularly witty, his word smithing goes like this: "Where Tango ceases, God begins. THe syllable of both words connecting together is the 'go'. "  One is impressed. Pumberger does not forget to recall that Pope Francis in his youth was allegedly an "avid tango dancer". Anyway, the mistake of a Tango dancing couple seems to be reserved for Holy Mass in the German-speaking world. In Rome, they wanted organize a major tango event, to the tango for the friendly Pope. However, not in a church, but fits on the large Piazza del Popolo (see poster). Maybe it's the lasciviousness of the dance, to which Pumberger is attracted. There are, it was recommended to him and all interested parties, sufficient Courses and Events for tango enthusiasts, where you can participate. The dancers invited by Purnberger  can certainly give knowledgeable information in this regard. However, it is to be hoped that the couple has more sense of the sacredness which the Mass brings, than the full-time parish assistant, and even keep clear of giving   a demonstration during the sacred liturgy in order then to present their skills at an appropriate place outside the church.
It fits into the picture, so to speak, that Pumberger completed his theological studies with a thesis directed by an Old Catholic priest and secretary of the Labor Representative of the Department of Pastoral Professions is the Diocese of Linz. The department currently employs approximately 320 full-time "lay pastors" for the diocese.
Text: Giuseppe Nardi
Trans: Tancred vekron99@hotmail.com
Link to Katholiches...
AMGD
Posted by Tancred at 8:28 PM

"My dear daughter, listen well to what I have to say to you. You will inform your superior."

After a short silence:

"As I told you, if men do not repent and better themselves, the Father will inflict a terrible punishment on all humanity. It will be a punishment greater than the deluge, such as one will never seen before. Fire will fall from the sky and will wipe out a great part of humanity, the good as well as the bad, sparing neither priests nor faithful. The survivors will find themselves so desolate that they will envy the dead. The only arms which will remain for you will be the Rosary and the Sign left by My Son. Each day recite the prayers of the Rosary. With the Rosary, pray for the Pope, the bishops and priests."

"The work of the devil will infiltrate even into the Church in such a way that one will see cardinals opposing cardinals, bishops against bishops. The priests who venerate me will be scorned and opposed by their confreres...churches and altars sacked; the Church will be full of those who accept compromises and the demon will press many priests and consecrated souls to leave the service of the Lord.

"The demon will be especially implacable against souls consecrated to God. The thought of the loss of so many souls is the cause of my sadness. If sins increase in number and gravity, there will be no longer pardon for them"

"With courage, speak to your superior. He will know how to encourage each one of you to pray and to accomplish works of reparation."

"It is Bishop Ito, who directs your community."

And She smiled and then said:

"You have still something to ask? Today is the last time that I will speak to you in living voice. From now on you will obey the one sent to you and your superior."

"Pray very much the prayers of the Rosary. I alone am able still to save you from the calamities which approach. Those who place their confidence in me will be saved." Our Lady of Akita (approved)

In 1984, just before retiring at a venerable age, the diocesan Bishop of Niigata, Bishop John Shojiro Ito, in consultation with the Holy See, wrote a pastoral letter in which he recognized as being authentically of the Mother of God, the extraordinary series of events that had taken place from 1973 to 1981 in a little lay convent within his diocese, at Akita, Japan. Cardinal Ratzinger, now Pope Benedict XVI, in June 1988, approved the Akita events as "reliable and worthy of belief". In fact the Philippine ambassador to the Vatican, in 1998 spoke to Cardinal Ratzinger about Akita and the Cardinal: "personally confirmed to me that these two messages of Fatima and Akita are essentially the same". Hence in Akita we are dealing with a Church approved intervention of the Blessed Virgin Mary as sure in this respect as Lourdes, La Salette, or Fatima.

Francis must to be happy with this mess because in Argentina also as Cardinal he committed the sacrilege to participate in a Mass Tango
http://en.gloria.tv/?media=525686