Anti-Catholic Media Watch: 800 Children Were NOT Dumped in a Septic Tank 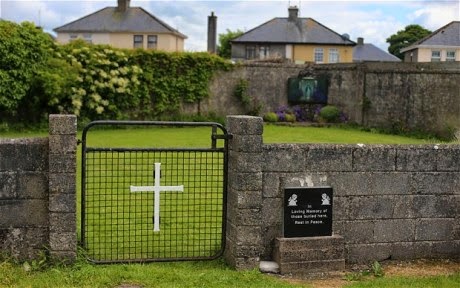 What has upset, confused and dismayed her in recent days is the speculative nature of much of the reporting around the story, particularly about what happened to the children after they died. “I never used that word ‘dumped’,” she says again, with distress. “I just wanted those children to be remembered and for their names to go up on a plaque. That was why I did this project, and now it has taken [on] a life of its own.” - Catherine Corless


Edit: the news is awash with the completely mendacious story of a Magdalen home in Tuam Ireland where fallen women and their illegitimate children were housed, and given a chance on life, as opposed to being preyed upon by pimps.  The story claims that 800 children were "dumped" in a "mass grave" in a "septic tank".  The story was an emotional one and conjured up the usual misogynistic images of cruel faces of doughty sadistic nuns in medieval cowls overseeing a mass murder.

The story was based on the work of an independent researcher, Catherine Corless who is horrified that her story has taken on such macabre dimensions and is being used to unfairly malign the Church, which is covered by the Catechesis of Caroline Blog.  We came by this at the comments at Father Ray's blog.

In fact, we find out that the image of the mass grave was false.  The septic tank contained not 800 but 20 infants.

When considering this story about the number of poor babies dying from malnutrition and "neglect".  We don't know the budget the nuns had to work with, but we are sure it wasn't unlimited.  It's also important to remember that during the time period covered from 1925-1961, that the world was undergoing an agricultural revolution where crop yields quintupled and food prices dropped.   Not surprisingly, many of the deaths from malnutrition occurred in 1944 when a world conflagration and German U-Boots made commerce risky and rationing was strictly enforced.  People were hungry during the war!

If you throw enough crap, you'll eventually get enough idiots ending up believing it for your political ends.

Everything was done to spare the public from knowing anything about what happened to aborted babies in the UK, the burning of babies in ovens to heat buildings.

Archbishop Cranmer's blog has postings on this. All very anti- Catholic. Hardly surprising I suppose.

All of the Crypto-Protestant apologists were eager to confirm this false story.

Regarding any children in the septic tank: It is not uncommon for women to confuse the pains of labour with the urge to void, particularly first time mothers. I suspect those children were born in the toilet prematurely and still born, and then flushed by frightened girls. Burying the dead is a temporal act of mercy, and if any Catholic ever treated any person's earthly remains, it would necessarily been in spite of their Catholic beliefs, and not because of them.

The Drudge Report never misses an opportunity to smear crap, be it true or false, on any form of Christianity.