What Kind of Theology Did Pope Francis Represent in Yad Vashem? 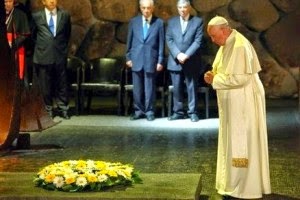 (Jerusalem) To  Pope Francis’ address on May 26, 2014 at  the Holocaust memorial Yad Vashem in Israel  the traditional site "Messa in Latino” published the commentary of a priest. He wrote several theological and less theological comments on the Pope's address, for which we ask for discussion. The full speech of Pope Francis has been published in English translation by the Holy See, as well, the speech will be viewed as a video ( here ). The intertitles are from the editorship.

by a priest
The first step is to join in the outrage that  the Pope participated  about the murder of the Jews in the concentration camps during the Second World War . Any form of violence and terrorist oppression no matter by what political direction, or on account of which diabolical intention whatsoever, is to be unequivocally condemned. It is also important to remember again and again, so that the same is not repeated. As far as the connected theory. The practice is unfortunately different. The killing goes on even today in various parts of the world and even among us in the "civilized" parts of the world. The Nazis murdered secretly and illegally, while the scandalous murder of unborn children is done in broad daylight and in a "legal".

All Crimes Condemn - None Worse Than the Other

“Adam, where are you?” (cf. Gen 3:9). Where are you, o man? What have you come to? In this place, this memorial of the Shoah, we hear God’s question echo once more: “Adam, where are you?” This question is charged with all the sorrow of a Father who has lost his child. The Father knew the risk of freedom; he knew that his children could be lost… yet perhaps not even the Father could imagine so great a fall, so profound an abyss! Here, before the boundless tragedy of the Holocaust, That cry – “Where are you?” – echoes like a faint voice in an unfathomable abyss…

Allow me humbly to point out that God, if He in the Book of Genesis asked this question, certainly thought neither of the Holocaust nor about Yad Vashem. Such exegesis is more than just a heterodox venture.
May I also humbly point out that God addresses His message to the people and not to the Son (just because the singular is used), because the (single) Son of the Father (the Trinity should be sufficiently present to  a pope) is Christ. But man is an adopted son of God and not of the Father, understood as the first divine person. Man is God's adopted son through the redemptive Incarnation of Christ. For the Jewish theology, God is neither a trinity nor does the adoption apply to all men, but only for a people, namely them. But that has been defined for two thousand years by the rejection of Jesus Christ and thus God. Theologically considered, blessings can hardly grown out of this rejection. Did the Pope at Yad Vashem present Jewish theology instead of Christian?

To say that, as Pope Francis at Yad Vashem, that "perhaps not even the Father  could imagine  such a fall, such a precipice" "imagine" the humanity could provide an even more demonstrative and overt heresy dar.
God knows everything, that much Pope Bergoglio should at least know from the Catechism. To say that God was even prematurely to give  free will to the people because he "could possibly not imagine"  the consequences, is a downright obscene heresy and especially blasphemy.
Through the modal adverb “maybe"  the heretical contents of the statement is in no way weakened. The assertion that there it is  only a possibility,  or one does not categorically exclude the possibility that God could not be omniscient, opens the door to doubt and is with certainty  not Catholic.

The Past is Passed, But Prevent Suffering Today

I finally allow myself, even if only in passing, also to point out that the "bottomless pit" of racism and state terrorism by Israel against the original indigenous people of the Holy Land, but also engaged against the present population of the occupied territories, the Gaza Strip and the West Bank, is certainly well known to the Father and the whole Holy Trinity.  But "maybe"  Pope Bergoglio is not informed, though he stood at the new "Wailing Wall", who built the State of Israel. Instead of losing a word about the expulsion, oppression and harassment of Christians by Israel, or of the whole people of the Holy Land, the Pope laid a wreath on the grave of the founder of Zionism.
It’s also a dubious act, the new Papaboys do not want to see.
Introduction / Translation: Giuseppe Nardi
image: Messa in Latino
Trans: Tancred vekron99@hotmail.com
Link to Katholisches…
AMGD
Posted by Tancred at 6:55 AM

Good grief. Don't let's pretend the poor Muslims you are defending as the 'indigenous' people are sweet gentle angels. Obviously you are conveniently forgetting the animalistic outrages they have committed against Christians and Jews inside and outside Israel. You and I both know they would cut your head off and burn every church to the ground if there were no one to stop them. Your defense of these heathens is incomprehensible to me. You are naive in the extreme.

You are no different than those in the US who blame whites when some blacks decide to burn down their own neighborhood. Hmm perhaps if the poor Muslims were working and going about their business like civilized humans they wouldn't have the problems they have. Eureka! I'm a genius.

The anonymous posts are quite pathetic, find another blog site

Sigh. It's always something, isn't it? Superficially gentle and pleasing words that dissolve into theological confusion (and perhaps even heresy) under even mild scrutiny.

It appears that the Holy Father may have annoyed all parties with this trip. The Jerusalem Post accuses him of anti-Semitism and of fostering Holocaust denial by his visit to the Security Wall, while the priest writing the above article accuses him of neglecting the oppression of Palestinian Christians. I expect we'll soon be hearing complaints from the Mahommedans!

You can't make everybody happy.

If I could suggest this, I would refer you to the historical realities of that sad land prior to 1948 when the Holy Land was relatively peaceful. That situation changed after the land was invaded by European, Russian and American Jews who had their mad dream of Zionism and began the expulsion and ethnic cleansing of a people who had been living in Palestine for 5,000 years. THAT is the beginning of the troubles in the Holy Land, and simple Christian justice and mercy compels us to never forget those facts.

You would do well, too, to try to realize that the historical inhabitants of that country were Christians. And we should also recall that in recent centuries there was a basic friendship which had developed between the Christians the Muslims who came there. It was an uneasy friendship to be sure, but it was nothing like the killings, bombing, and miseries going on since their land was occupied in the late 1940s by the zionists.

In these matters it is good to keep a historical perspective.

The Muslims and the Christians of the Holy Land have been going about their business like civilized human beings for many centuries. But when Israelis come in and burn their crops, chop down their ancient olive groves and install a new Berlin Wall right down the middle of their country it makes it kind of hard to go about their business.

Hi Tancred. I'm surprised this "prayer" by Bergoglio has not received more attention and more criticism. I wrote an article about it on my blog immediately after the event. Personally, I came to the following conclusion that Bergoglio's reference to "Adam" is really referring to the New Adam which is Our Lord and Savior Jesus Christ. And that Bergoglio is blaming the death of Jews at hands of the pagan Nazis directly on Christ and on all Christians. He is saying "their blood is upon all Christians and our children". This is turning the Gospel completely upside down. And I must add that his inversion of the Truth is a method that is typically employed by those in the service of Satan.

I hope you don't mind that I include a link to the article at my blog:
Bergoglio blames (new?) Adam

Also, I am planning on a followup article today to discuss Bergoglio's use of quotations from the Book of Baruch in his "prayer". This stands out because Baruch is not part of the Jewish or the Protestant sacred scripture. It is only recognized by Catholics. I will expand on this thought in my new article.

Yours in Christ,
Michael

I think it’s important not to read too much into what’s being said. I find his witness to be highly problematic. I could say much stronger things, but his own words seem strong enough without too much embellishment or divination.