Missionary Bishop Kräutler: Praying for Vocations? "I'm Not Game For That" 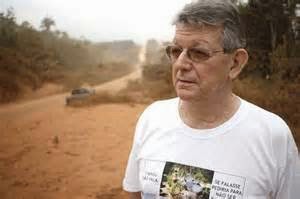 (Vienna) Praying for vocations to the priesthood for the left-friendly Austrian missionary Bishop Erwin Kräutler is like yesterday's snow. This had been the "concept" of Benedict XVI..

Kräutler insists in an interview with the daily newspaper Die Presse on "regional solutions to the celibacy issue". To such things, Pope Francis, who had received Kräutler last April 4th at the Vatican, showed himself to be "very open". The Pope wished for "proposals" on the celibacy question.

Kräutler have proposed to the Pope, "to decouple celibacy and Eucharist". That a Eucharistic celebration depending on a celibate priest was a "problem": "I'm not game for that," said Kräutler a daily newspaper.

Although Kräutler did not know whether Pope Francis will then implement his solutions, he was nevertheless very satisfied, because: "This process has never been allowed. Benedict XVI. has said, we pray for priestly vocations. This Pope is different. He wants to put in motion a process. "Under Francis doors are opening up, so said the Old Liberal missionary bishop from Austria.

ooooouuuuugggghhhhh......when will the pain stop????

"I'm not gamed for that that." Doesn't that off the cuff comment betray a lot about his mental outlook and intellectual capacity?

The Pope seems to like these sorts of hirelings.

It saddens me to see so many men in eminent positions who have clearly lost the Faith. There are eternal ramifications to such things, and they simply are blind to this.

As an aside, there are several saints who prophesied the worst form of chastisements following the abolition of priestly celibacy. Discipline or not, we will suffer if this changes.

My suggestion for celibacy and the Eucharist is leave things alone.

The idea of regional differences is daft. Married priests in Poland but not in Portugal, absurd. Anyone who thinks marriage will increase clergy numbers should just look at the figures for male clergy in other ecclesial bodies. Going down the plug hole, same as the current Novus Ordo orders – but not the Vetus Ordo orders, of course.

The Novus Ordo Seclorum does not have priests - they are called presbyters. It is very reassuring to see a liberal modernist presbyter talk as he does because we know this is a real liberal who simulates "priesthood" but cannot hide his sheer contempt for it by wearing a t-shirt and talking like a liberal wreckovator. We can tell a phoney version when we see one and when we hear one speak.

Krautler just cannot be a bishop of The Roman Catholic Church because he talks like a protestant and a rebel.

Celibacy is not an essential component of the priesthood.
The first pope St. Peter was a married man.
A married catholic clergy has no doctrinal implications since celibacy is soley a matter of church discipline.

It's an apostolic mandate. Let's keep the dissidence down to a minimum.

A priest at a Tridentine Mass said in his sermon, "Many of you are asking, why is God not listening to my prayers? Rather the question is are you listening to God?". Does this Bishop really believe that by prayer God is going to send young men to him for the further destruction of their souls? God answers all prayers, so the answer to his prayers will bring a guarantee that God will not send him anyone. The Traditionalist Seminaries are full of vocations and that because these seminaries have not betrayed Christ and his Church. Today the majority of priestly vocations in the Novus Ordo seminaries are traditional minded young men. I went to a NO Mass recently and was surprised that the young priest after his sermon faced the Altar and climbing the steps prayed out loud, "I will go unto the Altar of God. To the God who gives joy to my youth". This Bishop should just resign and get over it. One would think that the modernist heretics would by now have faced the fact that they have been a total and complete failure.

I have put my son on the Trains many times...

Dark cold and gray
Under a wave of cement
Wander steel rails
Puffs of smoke
Spray up
From steel-gray whales
He enters
Willingly -
The steel groans and away sails
To the Cross-road
Shores
Of Sacrifice and steel nails.

I'll have to ponder this one.

Celibacy is the “choicest ornament of our priesthood” (Pius X), “one of the purest glories of the Catholic priesthood” (Pius XI), and a discipline that makes the whole life of the priest “resound with the splendor of holy chastity” (John XXIII).
Priests are an alter Christus; the celibate person anticipates their new life in the world to come; a priest shares in Almighty God's heavenly fatherhood and all God's children are his too, spiritually; it is an angelically pure life, closest to Christ & a great personal sacrifice.

"Under Francis doors are opening up, so said the Old Liberal missionary bishop from Austria."

## AKA "the gates of the underworld", that "will not prevail against" the Church ?