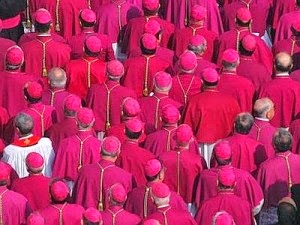 From Giuseppe Nardi
(Rome) The incomprehensible words of Bishop Nunzio Galantino, the Secretary General of the Italian Episcopal Conference has unleashed resentment and disappointment among Catholics worldwide.  Particularly irritating is   the true fact that Bishop Galantino was appointed by Pope Francis and is the strong man in the Bishops' Conference.   Is it not the Pope who continuously criticized careerism and comfort? But what other than comfort, could there be if bishops refrain from the defense of Catholic doctrine and make dialectical tricks to bring themselves into line with the world? Bishop Galantino constructed in an interview with the Italian newspaper Quotidiano Nazionale (QN) a contrast between ethical questions that he played off against each other (see separate report Bergoglio Effect: Secretary of the Bishops' Conference Distances Himself from Pro-Lifers ). He opposed the commitment to the right for the life of children against concern for employment and health.
The bishop revealed that the opposition to abortion has become annoying to  part of the Church hierarchy because it strains  a congenial relationship of the Catholic Church with the ruling forces. Not only the left-wing parties, but also increasingly the bourgeois parties exclude any discussion of abortion legislation. Rather, the consent to abortion has become  a condition for government funding or even for licensing  as is done  in the U.S.. Government by Obama

The powerful want  child murder? Hooray We Cave In

Bishop Galantino  spoke openly about  what not a few bishops have long implied indirectly. The right to life issue and the Pro-Lifers disturb the good relations with those less and less influenced by Christianity in power, politics and the media. To express this, the new Secretary General of the startled Italian Episcopal Conference by not hesitating to caricature the Pro-Lifers in a condescending manner. That and the new Chairman of the American Bishops' Conference, Archbishop Joseph Edward Kurtz kneeling in front of abortion clinics praying the rosary, would be passed over in silence by Galantino. He, for one, will not do it. Not only that, those who do it, disturb the influential prelates. Probably because they are a constant reminder to the conscience. 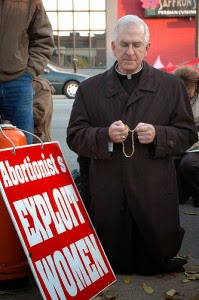 Padre Pio and the Power of Prayer

Does  Bishop Galantino  not believe  in the power of prayer when he finds it so inappropriate and  makes derogatory judgments on those who pray against abortion? "Prayer is the best weapon we have. It is the key that opens the heart of God ", however, was what St. Padre Pio of Pietrelcina said.
"Bishop Galantino, maybe you should just sit through a prayer vigil where people witness to the faith witness against the greatest crime in human history, while others are comfortably sitting at home," said Pro-Lifers Michele Majno in Riscossa Cristiana . "In addition to the smooth and slick passers by there will always be some stubborn 'Catholics who hold the rosary between their fingers and pray, rather than discuss some documents on socio-political issues, married priests, communion for remarried divorcees, tacit acceptance of abortion and vocal recognition of homosexuality, because they know that priests do not marry, sacramental marriage is indissoluble, and that homosexuality and the murder of innocent children are abominations that cry out for God's vengeance, "  said Majano.

Many bishops in Europe have remained silent too long

Bishop Galantino invented instead the assertion that he seems to have brought over one to one from Pope Francis, that the Church, so to speak has talked  too much   about abortion and could not constantly continue so one-sidedly.

From the words it is clearly apparent that life issues seem to get on Galantino's nerves.  The mass murder of unborn children isn't bothering him, but that there are Catholics who still point it out, although the rulers of this world have but decided on  their laws and therefore want to kill undisturbed.

Actually,  Bishop Galantino has claimed the exact opposite to be true. Many representatives of the Church, except the Popes (only since Pope Francis whose  pontificate's  papal attitude seems on the whole ambivalent) have been silent for decades on the subject of right to life. If they take a stand, then it is quite stealthily, so there's not too many to remember. An indictment against the biggest, industrially organized mass murder in human history you do not get to hear from the vast majority. It is much faster to enumerate the few bishops who have seriously  raised their personal voice against child murder with conviction, not as the tentative opinions, or roundabout explanations of the Episcopal Conferences.

Bishop Ludwig Maria Schwarz of Linz, that Austrian diocese, which is a prime example of undersierable internal developments in the church in the German speaking areas, traveled to Vienna in order to participate last Wednesday at a "vigil" in front of the Federal Chancellery. He thus demonstrated against government cuts for NGOs for development cooperation. "We have a duty to provide assistance," rightly said the bishop. However, for the bishop it is not a problem   to show solidarity without distinction with organizations whose "development aid" participates in the promotion of abortion (keyword "reproductive health") .
Bishop Schwarz, however, was not seen on the street in order to demonstrate for the right to life  or to pray in front of an abortion clinic. An opportunity  would be available in Linz on Saturday, 17 May, where Human Life International Austria and the club Yes to Life invites you to a prayer vigil and among other things to the General Hospital of the city and the rosary for the right to life of mother and child pray against infanticide.

Questions to the Bishops

Bishop Galantinos "slip" was a few days after in Rome 4 March for Life was held in which more than 50,000 people took part, to demonstrate for life and against abortion. The lifers have thus provided evidence that the street does not belong only to those who demonstrate for the death. Is Galantinos  message to be understood in response to the March for Life? Therefore some questions to the bishops of the West:
1) Are the tens of thousands of people, priests, religious, children, adults, women, men and the elderly (including those who came in wheelchairs and on crutches), who drew representatives demonstrating marching for two hours in Rome's  Republic Square to St. Peter's Square  finally finding political recognition? Will the bishops relate a clear position, not only abstract,  for life, but specifically against the daily threat of abortion and the abolition of abortion murder laws?
2) From the 5th to the 19th of October, 2014, the Vatican Synod of Bishops will be held on the theme: "The pastoral challenges of the family in the context of evangelization." In the chapter Code of Canon Law (CIC) states to synodal assemblies (Canon 346.2): ​​"Convened for the Extraordinary General Synod has to deal with matters that require a timely resolution." Do the concerns of lifers belong to the "affairs" that "require timely resolution"  (this is really a matter of life or death)?
3) The Pope said at the Angelus in St. Peter's Square to the 50,000 participants in the March for life in Rome (which  made   all the great Catholic lay associations and movements stand out  by their absence): "Good luck and forward".  When will the bishops follow the example of Cardinal Raymond Leo Burke and go at the first opportunity on the street to take part in the March for Life prayer vigils in their country and in front of abortion clinics and  appeal uncompromisingly for the right to life?
Text: Giuseppe Nardi
image: Riscossa Cristiana / Diocese of Linz (Screenshot) / La cigüeña de la torre
Trans: Tancred verkon99@hotmail.com
Katholisches....
AMGD
Posted by Tancred at 4:11 PM

It is time for faithful Catholics and traditional. Traditionalist Catholics around the world t tell Pope Francis and his underlings that we will not obey his direction, and we should mount pressure Pope Francis to resign.

After all, these people who love Francis did the same thing to a great Pope...Benedict XVI.

We do not have many prelates of the caliber of Cardinal Burke. And remember that he is not in favor at the present time, having already been removed from two congregations. But it has always been this way. There were NO other bishops with the caliber of St; John Fisher in England when Henry was forming his own church so he could commit adultery and murder. Where are the saintly bishops and cardinals who stood up to Luther when his scaled down 'church' overran much of Europe, causing a bloody civil war? You have the bishops living in luxury and not standing up for the truth but giving wishy-washy nods sometimes in the direction of truth or being busy about the environment or immigration. Where are the bishops concerned with the saving of souls and standing up for the truth? And Our Lord is The Truth! But we must remember that our hierarchy has been infiltrated by masons and sodomites and absolutely nothing has been done to remove them.

Galantino is in "full communion" with the pope and, so, he can say whatever he likes.

I reject Pope Francis, and his advisors be they Cardinals or Bishops.
But I highly regard and esteem Pope Benedict XV ! I hope he outlives Francis. That would be a shocker for some people !