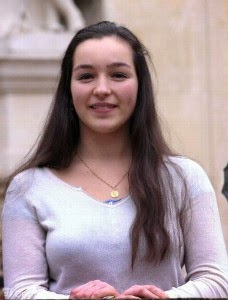 But the Inquisition considers  these words were insufficient. Rather than bring peace in the matter, there were increasing attacks. Politicians and homosexual associations blustered, and threatened the mobilization of self-proclaimed 'civil society'  and the media stood outside the door of the student, who didn't know how it came to pass.At the end, there was pressure from the Organizing Committee that got cold feet. They did not wish to  become embroiled in a "political conflict", it concerns a  "Feast", it was said. Finally Félicité  deleted Manif pour tous and other "suspicious" groups from her Favorites list. But that was not enough for  the modern Jacobins. The girl had to cede to the pillory and a public statement with a mea culpa, that she had been "reckless".
Modern "tolerance" has no culture,   because it wants to celebrate the feast of a Catholic Saint, but promotes anti-Catholicism. And it is unrelenting and as old as the saying goes: if you're not willing, I'll make you...
Text: Giuseppe NardiImage: Tempi
Trans: Tancred vekron99@hotmail.com
Link to Katholisches...
AMGD
Posted by Tancred at 5:34 PM

BOYCOTT BASTILLE DAY! DOWN WITH THE ANTI-CHRIST REPUBLIC!

O Sons of France, gird up thy loins and arise, for now is the chance to fight for thine Eternal and Sovereign King, Jesus Christ who though He reigns in Heavens, suffer with thee upon the hallowed Rood!; Now is the time to destroy the works of the Obscurer, the Deceiver who calls himself "Light" but is the destroyer of souls! Instead, praise the Sun of Righteousness in All His Glory, and fight until the last breath for Greater Glory!

Saint Joan of Arc, Holy Maid of Orleans, pray for us!