FIre in Grotto of the Nativity in Bethlehem 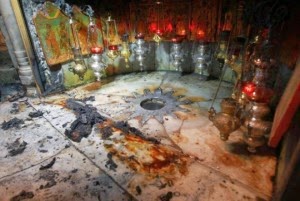 (Bethlehem) moments of terror prevailed in Bethlehem when the Grotto of the Nativity was on fire. The fire in the crypt of the Church of the Nativity Bethlehem broke out a few hours after  Pope Francis returned to Rome.
The Catholic Church leader had visited the Holy Land for three days  from Saturday to Monday. On Sunday, he had also come to Bethlehem. He also visited the grotto below the  Cathedral built by Emperor Constantine the Great  and prayed at the spot Jesus Christ was born.
Regarding the cause of the fire, there is no certain knowledge. It is assumed that one of the oil lamps had ignited a tapestry. Within a few seconds  parts of the birth grotto were in flames. Because, besides the tapestries there was not much combustible in the grotto, the damage had been limited. "The shock we received when we saw the flames was great," said an Armenian monk. The cleanup is underway.  Like  the Holy Sepulchre in Jerusalem, several Christian churches share in the Church of the Nativity in Bethlehem.
Link to slideshow at Katholisches...
Trans: Tancred vekron99@hotmail.com
AMGD
Posted by Tancred at 8:43 AM