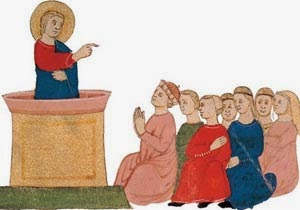 (Rome) Liturgy Free Day worship instead of Holy Mass, instead of confession, general absolution. The  abuse as sham knows many forms of expression. Even the sermon was not exempt. A pastor invented as the latest novelty for Lent a "sermon in dialogue”. He moved the sermon to the very end of  Holy Mass and opened to the faithful, to replicate in the church on his sermon, discuss and express their opinion.
What  a sermon is,  is clearly defined in the ecclesiastical regulations. In the introduction to the Missale Romanum  it states in paragraph 65:

The homily is part of the Liturgy and is strongly recommended: For it is necessary to nourish the Christian life. You should present a point of view from the readings of Sacred Scripture or of another text of the Ordinary or the Proper of the Mass of the day - taking account of the Mystery that is celebrated and the particular needs of the listeners.

The conciliar Constitution Sacrosanctum Concilium says of the sermon in point 52:

By means of the homily the mysteries of the faith and the guiding principles of the Christian life are expounded from the sacred text, during the course of the liturgical year; the homily, therefore, is to be highly esteemed as part of the liturgy itself; in fact, at those Masses which are celebrated with the assistance of the people on Sundays and feasts of obligation, it should not be omitted except for a serious reason.

So there it is neither a speech nor a talk show and not a discussion board. In the introduction to the Missal states in paragraph 66:

In general, the priest-celebrant has perform the homily, or it is transferred to a priest concelebrating with him (...) but never a layperson. In specific cases and for a just cause, the homily may even be given by the bishop or by a priest, taking part in the celebration, without being able to concelebrate.

Prohibition of Lay Preaching in Holy Mass for Pastoral Interior

A clarification will be given with reference to Canon 767 Canon Law, which  establishes:

The most important form of preaching is the homily, which is part of the liturgy, and is reserved to a priest or deacon. In the course of the liturgical year, the mysteries of faith and the rules of christian living are to be expounded in the homily from the sacred text.

A ruling, which is found in Article 3 in the Instruction regarding Questions of the Collaboration with the Laity in Functions of the Priest in 1997 is found:

The homily is as an outstanding form of preaching, " qua per anni liturgici Cursum ex textu sacro fidei mysteria et Normae vitae christianae exponuntur ", part of the Liturgy itself.

Therefore, the homily must be during the Eucharist the sacred ministers, priests, and deacons, are reserved. Excluded are lay people, even if they fulfill tasks as "pastoral assistants" or catechists in whatever groups or associations. The issue is not about a possibly better gift presentation or a larger theological knowledge, but rather that of a reserved task, which was equipped with the sacrament of Holy Orders. Therefore, not even the diocesan bishop authorized to dispense from the norm of canon.It is in fact not a merely disciplinary available, but a law that deals with the tasks of teaching and sanctifying, which are mutually closely connected.

Reply to the  Preaching, Give Opinion, Discuss

A parish priest of San Carlo Borromeo of Pognano in the home diocese of John XXIII had a new idea.   During Lent, he offers his faithful in the Sunday Mass as a “novelty", the ability to respond in the church on his sermon. The faithful can ask him questions in the church or speak their minds. The whole thing is called "sermon in dialogue".  It supposed, as it is described in the parish sheet, to be a response to the general criticism that the priest is talking from the ambo, "to answer without that, the believers have the opportunity to respond and to argue." Therefore, the priest in the parish journal wrote, "I am celebrating the Mass, closing with the homily from and openning  up the debate.” He put the Sermon arbitrarily at the end of the Eucharistic celebration.
The initiative was singled out for praise in a recent issue of Famiglia Christina, the largest Catholic weekly magazine in the country.
Text: Giuseppe Nardi
Image: Medieval Miniature
Trans: Tancred vekron99@hotmail.com
Link to Katholisches…
AMGD
Posted by Tancred at 7:03 AM

The laity are taking over because the priests can't be bothered writing a meaningful homily. This sounds like group therapy at an AA meeting. Lord grant me the serenity to accept the things I cannot change; the courage to change the things I can; and the wisdom to know the difference.

Ah ! "Dialogue!" Yet another liberal modernist device for supplanting the norms of The Church liturgically and pastorally.

They are also taking over because the NO are running out of presbyters.