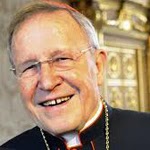 [PIus.info]  There has been global criticism among faithful, conservative and traditional Catholics about the pastoral lecture of  divorced and "remarried" by Walter Cardinal Kasper, the Cardinal replied yesterday with a half-page letter to the editor in the "Tagespost" on some of these criticisms.

The crucial passage from the letter to the editor refers to his proposal to allow "remarried" divorced to the sacrament of penance, the Cardinal writes in the letter.

"The decisive statement in this presentation is: 'Penance and the Sacrament of Penance are the way to connect both aspects. Commitment to the word of the Lord, and the never-ending mercy of God' (p. 65) It turns to the question  which has not been answered by the critics: Are you allowed to refuse absolution in such a situation in which the penitent has repented and testified honestly and in good will with their best efforts to live by faith? Is it not possible with God that someone could fall into a hole from which there is no way out? If that is impossible with God, then why not in the Church ...? "

Cardinal's sentences clearly demonstrated an awareness of precisely the crucial point of the whole discussion. Of course, the Church has never denied absolution to a man who has "repented honestly and testified in good will with their best efforts to live by faith." Yet the question here is, what it means, that the penitent has repented honestly? For sincere repentance it means  that he separates himself from sin and possesses  a firm resolve  never to repeat the sin, which without the help and grace of God is not possible of course.

However, this means with respect to the divorced and "remarried" that the partners decide to separate or if this is for important reasons (e.g. due to the children) is not possible, to refrain from the conjugal act in the future and to live together as brothers and sister. This is exactly what the Church has recommended for centuries for people living in such a situation. Cardinal Kasper, however, would like to eliminate this clear and visible sign of remorse and repentance, and it is based in substantial part of the criticism of his lecture, which he never responded to in his letter to the editors at any point.

Kasper shows a completely defective understanding of repentance. He seems to confuse it with mere regret. No wonder he has dug himself into the black hole of solemnization of bigamy.

When will Francis resign and take his monsters with him?

"Is it not possible with God that someone could fall into a hole from which there is no way out?" How do people with such mush for brains become priests, much less bishops or even a cardinal? He paints a false dilemma here. There is absolutely a way out for these "remarried" persons. Separate and live as brother and sister. Not saying its easy but there's no way to grant absolution when a person is persisting in grave manifest sin.

Living as "brother and sister" continues to violate the obligations to one's spouse. It is a boondoggle and it is hersey, even if an idiot occupying the See of Peter says otherwise and the entire hierarchy aggrees with his stupidity and arrogance. There is nothing to prevent seeking to heal the valid marriage and waiting for just that, alone!

The Catholic Church is in darkness that is nearly complete. It needs to be rescued by the laity and run by annulment repondents until there are good clergy, which will be generations away!

There are no fit clerics, not a one!

If there are no fit clerics, you could always become a Unitarian or something.

Karl, Thanks be to God, there are plenty of "fit" clerics. There are the SSPX, FSSP etc.,etc. There too are many real excellent, holy, novus ordo priests.
We may feel at times to be abandoned but...we are not orphans. God will provide always! Pax et bonum.

I stand by my disagreement.

I used to hear these fruity seminarians always calling the Church that. I wish I'd at least said something.

It is easy during the reign of liberal modernism to have such heretics & de facto schismatic clerics and bishops. Phenomenology permits anything you wish it too - just use your inner consciousness and leave it to the primacy of a defectively formed conscience.

You cannot possibly have holy presbyters (use the correct Conciliar term) who use the vernacular, anthropocentric, protestant style sectarian Novus Ordo which poisons The Faith with confused ideas about what constitutes valid liturgy and is repelete with illicit praxis that is most usually abusive.
The NO is the key problem for The Western Rite Latin(less) Church - Lex Orandi > Lex Credendi > Lex Vivendi > Lex Provendi. However, the Councils ushered in a liberal modernist disequilibrium with its flagship liturgical instrument 4 years later the NO which has led to an adverse law of prayer > adverse law of belief > adverse law of life > disastrous chief indicators including systemic division and mass illiteracy among neo-catholics about matters of faith and doctrine. Indeed, Cardinal Brandmuller put his very finger on the very spot - ignorance - the perfect formulae for paganism and atheism.

Until you all understand just how toxic this disgraceful Protestant, Cranmerian service is and the appalling affect it has on people then you will never put an end to the current ecclesiastical crisis. It embodies ecumenical rebellion, individualism, horizontalism and pantheism.