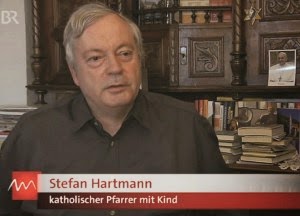 The priest breaks the vow of celibacy, leads a double life, does not draw the appropriate conclusions, but wants unapologetic adaptation not only for special treatment for himself, but even the whole ecclesiastical order to his "weakness". Because celibacy is just an "anachronism", which should be abolished thinks Hartmann. He speaks generously about not wanting to abolish celibacy,  but the  introduction of "voluntary"  celibacy, which is admittedly utter nonsense. This would elevate married clergy to a standard, which excludes whomever wants to just live as a  celibate priest, from  marriage. But as is known no one is forced into marriage by the Catholic Church. God had given  love, "not celibacy" which  celibacy opponents bring in their assault on the constitution of the Church as a fairly primitive denominator. That Jesus set aside celibacy for the sake of the Kingdom as a special act of love, is suppressed at all costs.
Jesus added, because He knew the people, even in the 21st century: "The one who can accept this should accept it." [Mathew 19:11] Today, all sorts of people jostling in front of the celibacy debate which  doesn't   affected them.  Were they silent, the quality of the discussion would gain much thereby. The priesthood and the religious life are voluntary acts, only obligatory to  those who are called. And to this appeal is included celibacy and chastity. Anything else would be a form of fraud, to oneself,  to God and to man.
The affected Archdiocese of Bamberg is silent. It sees no need for action, because Pastor Hartmann has only performed this escapade  once 24 years ago.  Hartmann himself knows better whether the Pope will offer a release from his vow of celibacy because of his "weakness" and his "constitution".   Strength of character looks different.
Text: Giuseppe Nardi
Image: BR (screenshot)
Trans: Tancred vekron99@hotmail.com
Link to Katholisches...
AMGD
Posted by Tancred at 9:41 AM

Sure hope the Pope does not cold call him and give him permission! Certainly he can be released from his vow of celibacy (which he has not kept and so has the sin to contend with) as soon as he is laicized.

The protestant revolt was all about not liking the rules and so inventing 'churches' to one's own opinions and likings and also so that certain sins are not viewed as such. So protestants do not have to honor the Lord on His day, they can divorce, and abort and what-have-you and not even call those things a sin. This priest should not be allowed to lead a flock and give any further scandal!

If only this was satire, but no, it is real life! It's a mess of contradictions that this man is proposing.

I'm that anonymous Catholic who advocated for married men to be allowed into the priesthood. I still stand that because the law allows it, married priests should not be stigmatized. If no married priests are allowed, whether because it is an apostolic tradition to have only celibate, unmarried men, or a latter innovation to deal with the Church's position in the secular, temporal situation, then the Laws of the Church should reflect this prohibition. But it does not. When we start talking of "Individual Cases" then we intentionally create a grey area, and that's where the devil is. That's where the trouble is. Do we not at all acknowledge that married priests existed before any Schisms in the Church? I'm not talking about monks or bishops, I'm talking about priests, the order of which are created by Bishops in order to assist them in large cities?

Otherwise, we all have to face the embarrassing fact of former Anglicans and Eastern Catholics who have married priests, and allowed so by legitimate authority. "They're not -really- Catholics" we're tempted to say, or "They're just second-class Catholics" but, really, what does -that- sort of sentiment say, that somehow authority isn't in Rome, but in Econe, or some garage in Minnesota? Protestants in sheep's clothing!

I say, those already ordained should never be allowed to have their vows of celibacy lifted. They have to pay the price for their hypocrisy, of taking a vow, and now saying "That was a mistake, let me out of it."

His intentions are ROTTEN. He ought to be admonished, not because we are better than him, but because it is the merciful thing to do, and our God ordered us to do so, especially if his Bishop won't do anything about it, or if he is just that disobedient.

They are different from married men whose sacramental marriage to a woman is valid, and ordinations considered valid by legitimate authority, even if there are frothing-at-the-mouth Catholics who think the only Catholicism is Roman Catholicism.

Even Dollinger thought it was a dumb idea.

How narrow minded you are; clergy who have sexually abused children and paedophiles are accepted, a clergyman facing the fact he was unable to maintain the discipline of a man made law, is to be condemned.
There have been those who entered junior seminaries, still going through pubity, before understanding the full meaure of what was being demanded of them to become a priest, later fathering children and forced to disown them refused rescripts of their vows....others living lives of subterfuge taking up a double life...with another man's wife.
God knows the heart and the truth sets you free regardless of how it appears superficially and reported by those with dare to condemn.

Actually, pedophiles are so rare among the Catholic clergy they're not worth talking about.

M.Prodigal
There's no such thing as scandal in the Catholic Church anymore.

Sad he doesn't want to be laicised, but accommodated. Hopefully he didn't use parish funds to bring up his daughter.

So at age 59, he's admitted to the world he's still "up for it". How embarrassing. (OK, OK, I'm sure the 60+ all have great active sex lives, though I assume it's more true for men than women this age. Guys, I don't want to start up a discussion about this.)

I wonder if once, he (hypothetically) gets his permission to be released from celibacy, if he'd quickly marry the mother of his daughter - making an honest women out of her, or go off with someone else...

I think married permanent deacons was the thin edge of the (protestantising) wedge. Along with the never-disciplined practicing homosexual priests at it like "hammer and tongs", this has just added to some heterosexual priests thinking they've been left out of the sex action.