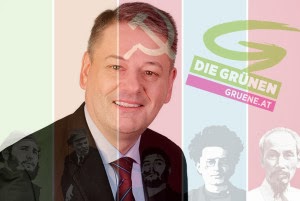 (Vienna) On the question of what Agriculture Minister Andrae Rupprechter means by a "Catholic marriage”  the  current Austrian Federal Minister replied first since December 2013: "My wife and I are ecclesiastically married, have two children - that's all. This does not mean that I have an old-fashioned family understanding. Unfortunately ... the child care system is backward here in comparison to Belgium - even in Vienna. The offering needs to be massively expanded. In my view,  the family the most important political task. "Child care out of the family, is what   the Christian Democrat  calls for  and plays it on the keyboard of the left.

Headlines on Oath  to the Heart of Jesus

Neo-Minister Rupprechter had arranged for the inauguration of the Austrian Federal Government for headlines because he took the vow   not only before God, but also mentioned the Sacred Heart of Jesus mentioned ( "So help me God, and before the Sacred Heart of Jesus Christ" - Oath of Office of Agriculture Minister Rupprechter ). In his native Tyrol the Sacred Heart devotion has a long tradition and is directly related to the resistance against  Josephinism and the anti-Napeoleonischen wars of liberation.
However, the reference to the Heart of Jesus seems to have been something of a flash in the pan for the Agriculture, Forestry, Environment and Water Management Minister. In an interview with the left-liberal daily Der Standard he expanded on the question whether Andreas Hofer was a role model for him:
"My role model in Tyrolean history is more of Michael Gaismair, who wrote as secretary of the Bishop of Brixen 500 years before, the first draft of the Tyrolean State Constitution. But I like the stoutness of  Andreas Hofer I suppose, of course."

A statement that is in direct contradiction to his Sacred Heart devotion. Gaismaier, social revolutionary in the time of the Peasants' War, has since the 60s been a favorite of the neo-Marxist left, and was previously with the National Socialists.  Both employed him in conscious opposition against the Catholic Andreas Hofer. Rupprechter continues to rely  on the Christian social teaching. Again, the ideas of the Minister seem pretty confused. Because at the same time he speaks, he called for the adoption rights of children for homosexuals. He refers to the new Family Minister Sophie Karmazin and her statement: "Where children feel comfortable, is family. I think there are good examples that children can feel comfortable in gay partnerships. I represent  a much more liberal view than one would assume from   deep-rooted Tyrolean Catholics. "

Neo-relativist Rupprechter: In an “Open World View" There are no Contradictions

The ideological confusion of the Minister is even suspect to the Standard: "Why then do you always refer to yourself  again and again as conservative?" Rupprechter in the posture of a neo-relativists is of the belief that belief is daily and situational juggling : "I do not see any great contrast. Conservative means to maintain traditional values ​​- and that can also be done in an open world view ".
However, the Minister is optimistic that the ideological arbitrariness would prevail in his party soon: "The realignment of the party is in full swing - and I will bring an open approach."
Both Rupprechter and Karmazin belong to the Christian Democratic People's Party (ÖVP). The Austrian People's Party went to the elections of the previous year in September again forming a grand coalition with the Social Democratic Party of Austria (SPÖ), which has existed since 2007, and previously reigned from 1987 to 2000 in Austria.

Former Trotskyite - "I Have Learned a Lot of Political  Appreciation"

Perhaps this explains Rupp Rechters attitude with the aftermath of his anarchist past during his student days. At the time the  ÖVP ministers campaigned in the ranks of the Trotskyists. "Just as Jacques Chirac and President José Manuel Barroso also," he added half apologetically, half  proudly. "They were short phases, from which I have learned a lot of  political understanding.  It has  socialized me in that I was as a Green for the first hours of the occupation of Hamburg wetlands there -  which was less of a motivation than the outrage at  the government  driving over civil rights."
Of the Trotskyists in the Green movement to the Christian Democrats. Today Rupprechter would probably have a career in the Greens. Which he had at that time but  did not stay connected because the Greens referred to the EU at the time as “Moloch" and "have denigrated and fought against Austria's accession." That has now changed, yes.

That  surely  fits into the picture that Rupprechter also has "problems" with Austrian Field Marshal Josef Wenzel Graf Radetzky, world famous for the Radetzky March by Johann Strauss (father). The Minister of Tyrol  had the same kinds of problems, in spite of being “imprinted”  by the Christian social teaching, with the corporate Chancellor Engelbert Dollfuss (1932-1934), who was shot in an attempted coup by the Nazis. These “aversions" round off the confusing picture of the new politically correct Austrian Minister of Agriculture.
Text: Giuseppe Nardi
Picture: Wikicommons (photomontage)
Trans: Tancred vekron99@hotmail.com

Link to Katholisches…
AMGD
Posted by Tancred at 6:10 AM