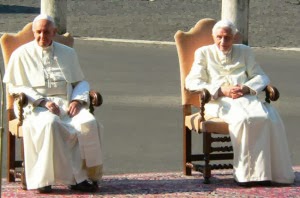 (Rome) The Vatican expert Andrea Tornielli published two sentences by Pope Benedict XVI., which were allegedly from a reply to a correspondence.  In it he declared that his resignation was "valid", it had been for no other reason than his age. "Speculation”  about this is "absurd."  He also confirmed the authenticity of statements attributed to him, that was written to the heretical theologian Hans Küng.  Does the Church have two popes? Benedict XVI. signed himself as pope and used paper with the letterhead “Pope Emeritus".  Francis describes himself as "Bishop of Rome" and signs only with "Franciscus". The traditional blog "Chiesa e post concilio”   looks beyond the alleged letter of Benedict XVI. and sees a transparent maneuver by  the ruling Church leadership, to cause widespread doubts and discomfort  and to silence the faithful. Tornielli has not printed the alleged the “letter”.  Above all, it does not come to him to deny or correct the place of the Holy See. Least of all with things of such magnitude. But above all Tornielli is not to be confused with the Acta Apostolica Sedis. In short, the message is reminiscent of another media  hoax  last summer, reported as a “great  mystery"  of an alleged visit to Benedict XVI. and the fact that he was supposed to have said, the Holy Spirit  advised him to resign (see separate report Benedict's resignation: "God told me" - Media Hoax of the “Great Mystery"? ). Tornielli was merely instrumental in this action, probably even  the misused tool of others, said "Chiesa e post concilio". We document the comment as a contribution to the current debate in the Church.
.

Tornielli quotes Some Sentences of Benedict XVI., Which Belong to "a Letter"


Chiesa e post concilio
The news has already made the rounds around the world. Tornielli published a "letter" of Benedict XVI., in which the "Pope Emeritus" explains and confirms his resignation's validity  that there is no other reason than "advanced age." He is also to have  confirmed Hans Küng (!) with the oft-quoted words about the "identity of perception" and his wish to want to be until the end of his days nothing more than a "worshiper".

I'm really sorry. Sorry to be treated by the so-called "Catholic journalists", but above all by the hierarchy as an imbecile (in the literal sense of the word). I'm tired of being mistreated, judged to be (with "Mercy") and sentenced and to be impeded in the utterance of doubt by arrogant and constant aggression. I am  sorry for this kind of "Orwellian despotism," in which only "war galleys" are included, that  "dominate". For the "nice words" about "service and humility," they just sound like hot air.
Some believers, it may be that they are a minority, are simply ignored or attacked mercilessly. To them it seems to be permitted, what the "Pope Emeritus" said of himself to the reactions when he offered the bishops of the SSPX an act of justice: total and unjustified hatred. The hatred manifests itself in very different forms: one of these is the indifference (the highest form of detestation) compared to the spiritual life and the soul of the faithful. Whether it is a believer or a lot, does not matter. Shameful is the sound, the disgust and aggression are treated with the those who "doubt". The allegations go far beyond a normal judgment and generalizations  about the exalted letters from "the despot" . Each argument is minimized, delegitimized, no matter who it submits. Arbitrary labels are missed, sometimes vile, just as it suits.

To Refresh The Memory: The Works of Mercy

Obviously, this "humble servant" have forgotten that in the church not important WHO says something, but WHAT he says. In addition, they seem to have forgotten just what the spiritual works of fashionably acclaimed mercy are:
So if justified criticism and legitimate doubts are expressed, then this must be clearly and unambiguously be clarified and resolved. When the believers are in the confusion, it is really to serve the duty of the holy shepherds their salvation, and to restore the right path. Chatter is not enough.
What do the articles of Tornielli  change in current situation? Nothing. The "Pope Emeritus" wrote him two lines that we do not want to call into question, from which he creates a message. The problem does not dissolve  with a simple denial. The "Pope Emeritus" should clarify the doubts with the facts. In this sense, I make a pressing appeal to him.

Why did not Benedict XVI  Pass the Papal Dignity?

If his resignation is valid, then he would do it again without any form of error which are sufficient to make him canonically invalid, then he renounces the papacy and the papal symbols and insignia, then it was abandoning but especially on being Pope , then he has resigned really and completely. If he really is in "full compliance" with Francis, then he officially denies his teaching position in relation to  Tradition, including the Motu Proprio Summorum Pontificum , which has already proven to have done so much good in the Church and which is now being  so openly rejected.
It's time to stop with the dictation. This seems to be a realm of chaos, instead of the Church. The despotism of the "galleys",  the "you do not know who I am" and "you must blindly obey" is over. The shepherds shall feed the sheep entrusted to them. They must do them  justice.
Text: Giuseppe Nardi
image: Chiesa e post concilio
Trans: Tancred vekron99@hotmail.com
Link to katholisches...
AMGD
Posted by Tancred at 2:05 AM

In Sister Lucy's own words disclosing a part of the Third Secret of Fatima, she relayed a vision which she saw 13 July 1917:

"After the two parts which I have already explained, at the left of Our Lady and a little above, we saw an Angel with a flaming sword in his left hand; flashing, it gave out flames that looked as though they would set the world on fire; but they died out in contact with the splendour that Our Lady radiated towards him from her right hand: pointing to the earth with his right hand, the Angel cried out in a loud voice: ‘Penance, Penance, Penance!'.

And we saw in an immense light that is God: ‘something similar to how people appear in a mirror when they pass in front of it' a Bishop dressed in White ‘we had the impression that it was the Holy Father'.

Other Bishops, Priests, men and women Religious going up a steep mountain, at the top of which there was a big Cross of rough-hewn trunks as of a cork-tree with the bark; before reaching there the Holy Father passed through a big city half in ruins and half trembling with halting step, afflicted with pain and sorrow, he prayed for the souls of the corpses he met on his way; having reached the top of the mountain, on his knees at the foot of the big Cross he was killed by a group of soldiers who fired bullets and arrows at him, and in the same way there died one after another the other Bishops, Priests, men and women Religious, and various lay people of different ranks and positions. Beneath the two arms of the Cross there were two Angels each with a crystal aspersorium in his hand, in which they gathered up the blood of the Martyrs and with it sprinkled the souls that were making their way to God."

This (above) is the translation posted on the Vatican website

There are better translations of Sister Lucy's Portuguese than this. Antonio Socci's book "The Fourth Secret of Fatima" being one.

A Bishop in white giving the impression he is the Pope? Perilous times indeed. Our Lady of the Rosary pray for us!

"Does the Church have two popes?"

1. one acting as Pope

2. one who is still Pope in dignity, but who has resigned the exercise of all the authority that goes with the Papal function.

B16 is not a simple priest, or even a retired bishop - he is a retired Bishop of Rome & therefore a retired Pope. He keeps the name of the office, but not the pastoral authority that goes with it.

Presumably an acting Pope would take precedence over a retired one.

That's my guess anyway. I do wish there were just the one...

"Turning and turning in the widening gyre
The falcon cannot hear the falconer;
Things fall apart; the centre cannot hold;
Mere anarchy is loosed upon the world,
The blood-dimmed tide is loosed, and everywhere
The ceremony of innocence is drowned;
The best lack all conviction, while the worst
Are full of passionate intensity.

Surely some revelation is at hand;
Surely the Second Coming is at hand.
The Second Coming! Hardly are those words out
When a vast image out of Spiritus Mundi
Troubles my sight: a waste of desert sand;
A shape with lion body and the head of a man,
A gaze blank and pitiless as the sun,
Is moving its slow thighs, while all about it
Wind shadows of the indignant desert birds.

The darkness drops again but now I know
That twenty centuries of stony sleep
Were vexed to nightmare by a rocking cradle,
And what rough beast, its hour come round at last,
Slouches towards Bethlehem to be born?"

So prescient. So very Irish.

"Tornielli was merely instrumental in this action, probably even the misused tool of others…"
This could be true.

He was carrying water for dissidents on the divorced and remarried to Communion thing.

I believe that Pope Francis I is the one who will consecrate Russia specifically by name to the Immaculate Heart of Mary with ALL bishops of the Roman Catholic Church very soon.

Poor Joseph Ratzinger! I believe emeritus Pope Benedict XVI is a "Bishop dressed in white" in the near future.

Russia has not been done as Our Lady of Fatima requested.

It is time to honor Our Lady of Fatima requested NOW!

"Finally, My Immaculate Heart will triumph. The Holy Father will consecrate Russia to Me and she (Russia) will be converted. A period of peace will be granted to the world." -- Our Lady of Fatima requested on July 13, 1917.

There cannot be 2 Popes, if Benedict's resignation were valid, i don't think it is, but if it is, then he is an ex Pope, a man who used to be Pope.