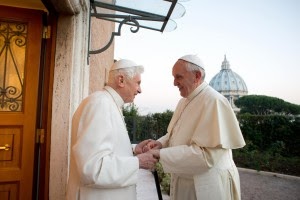 (Rome) A year ago today the resignation of Pope Benedict XVI by came into force by eight o'clock in the evening. The Catholic Church reflects gratefully on his pontificate. An open wound, however, is still his spectacular resignation, which is without precedent in the history of the Church in this particular context. Benedict XVI. was then expected to become "invisible" to   the World   and to lead a life of prayer. Literally, he said on 14 February in his last great speech, that he "will remain hidden to the world." Thus, however, it will not work so well. For Pope Francis, Catholic journalists and not least Curia Archbishop Georg Gänswein it is a concern. If so, it is humanly understandable. But who really wants to know that Pope Benedict XVI.  is starting to look like  "Kommissar Rex"? The dismantling of a pontificate has many faces.

It is his successor Pope Francis, who always brings him back into the public eye and his closest collaborators who talk too much about him. All to provide continuity and unity between the two popes. This in turn depends obviously on incessant speculation surrounding the resignation and the unusual situation of two popes, a ruling one and an emeritus together. Above all, it is the leadership style of Pope Francis which is responsible for  continuing, which  irritates faithful Catholics.

In the Catholic Church one tries to counteract the discussions, in striking contradiction to the desire of Benedict XVI. to live "hidden",  by presently dragging him into the public eye. There are Church leaders and Catholic journalists and media who put him there. The most recent example is the daily Avvenire of the Italian Bishops' Conference.

The Public Spread Day in the "Hidden" Pope

They did an interview with Curial Archbishop George  Gänswein and reported in much adieu that the Pope now enjoys watching watching films from "Don Camillo" to the TV dog detective show "Kommissar Rex". Even so, it looks like trivialization. The prefect of the Apostolic House of Pope Francis and personal secretary of Benedict XVI. told the Avvenire about the"everyday" of the Emeritus Pope. It consists of "prayer, books, music and one evening one or the other the film of Don Camillo or episodes of the TV series Don Matteo or Kommissar Rex". The day will begin with Holy Mass, the breviary and breakfast. The circadian rhythm was "quite human, not a Prussian barracks". The rest of the day consisted of pray, read, receipt of occasional visits and answering the numerous letters he  has received. The only distraction was a walk in the Vatican Gardens, in which he prays the rosary. The Pope live in the midst of his beloved books of theology. But he also read history books and biographies of great personalities. He also reads German and Italian newspapers, watches the evening news on the TV and he personally tries to reply to letters. "You can not imagine how many would like to visit and see him. I submit to him in any case, all requests. He then decides. The waiting list is now very long."

Pope Benedict I listen to music "mainly classical music, especially Mozart, but also Bruckner, Liszt, Bach, Schubert, Beethoven, Brahms. But even religious music: Gregorian and polyphonic. Should not miss the shots of the cathedral choir of his brother George. "Occasionally he also play the piano itself, especially the" beloved Mozart ".

Gänswein: Relationship to Successor is "Excellent"

Benedict is attentively following says  Gänswein,  international developments and those of the Church. Of course, what his successor Francis is doing, but he is interfering in any way. "The appointments he reads, if they are published in L'Osservatore Romano." His relationship with his successor has been "excellent". The two popes talk to each other in various ways: they call, write, they meet, they eat together.  Pope Francis has already come to a lunch at the monastery many times. Once, after Christmas, Pope Benedict was also a guest in Santa Marta.

To maintain a contrast between the two Popes, "is a favorite game of some journalists. I resent that. I have the grace with which to live and work with both of them. So I can be allowed to say, to know both fairly well. I do not see them competing but complementary. It is clear that the style, the gestures and the way of the government of Pope Francis is quite different than that of Pope Benedict. But you can not just build on an opposition. To do things differently, does not mean to it becomes inconsistent. One must always keep present what the Pope Emeritus wrote to Professor Hans Küng  and which Andrea Tornielli repeated, as he wrote of 'conformity of viewpoints and the heart of friendship' regarding Pope Francis."

This explicit naming and interpretation of two controversial documents of the past few weeks, that  were given to Tornielli was all announced  as recently as last Monday that was  amazing after all. The question is: Cui bono? It reinforces the impression that behind the recent events: the presence of Benedict XVI. the extraordinary consistory, the alleged Tornielli letter and now the Gänswein interview, there is a common language. The resignation of a pope, the life of a retired, "retired" Pope as normality? All very "human".

Some undeniable differences between the two should not be read maliciously. So they are different, for example, the sensitivity to liturgy: "This is an objective fact and it is not offensive to say so. But even in this case, I repeat, it doesn't mean it's  contradictory. "True to his announcement, Pope Benedict was not included to   mix in the decisions of Pope Francis:" He takes note of what is written, what is said, what is decided. Passively ad extra and ad intra in an active way. He hears and reads what you could hear on the Consistory or the questionnaire that was sent out by the General Secretariat of the Synod of Bishops. But he doesn't call anyone "up" to give advice or tips. He has retired. He no longer takes part in the government of the Church. That was not said once and then forgotten. It applies and will apply in the future. "

That Benedict XVI. also announced he would remain "hidden from the world", doesn't only seem to have been forgotten by Curia Archbishop Gänswein.

If Ganswein isn't lying about the relationship between the popes being "excellent" then Shame on Benedict xvi.

It is a little strange. It would be very interesting if you could juxtapose this interview with the one where Ganswein expressed his pain in a German magazine that all was in flux and he was going from one environment to the opposite. This interview appears to be in direct contradiction.

Usually, Nardi has insights or observations that are more pereceptive and accurate than other journalist, I thought about it, but then I got busy with some things and didn't get around to it, then the story got into the mainstream. I'll get on it asap.

Even with "two" Holy Fathers, I feel orphaned.

Me, too. There's nothing worse than our spiritual and moral leaders denying the extreme crisis that the Church is in. I think Bishop Ganswein doth protest too much.