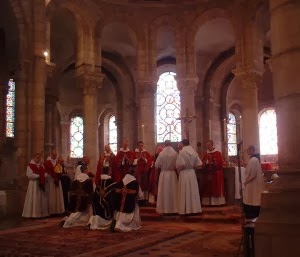 (Paris) The small village Fontgombault in Berry in central France is known mainly by Old Ritual Benedictines. But even by its militant Catholic mayor.  Despite secular state doctrine, he begins council meetings with a prayer. Fontgombault forms a separate municipality and has 258 voters. 70 voters are the monks of the abbey. This drives some Church enemies to fits of rage. Especially since Jacques Tissier, the longtime mayor of Fontgombault, took a stand against the new "gay marriage"  law.  The opponents of the mayor now want to exclude monks from the voters' lists   to influence the upcoming municipal election.

Mayor: "There is a Natural Law that Stands Above the Laws of Man"

In May 2013, the "gay marriage" in France had been pressed against fierce opposition from the people of the socialist government. Jacques Tissier, since 1977, Mayor of Fontgombault and practicing Catholic, said last November in a newspaper interview: "There is a natural law that stands above the laws of man."   On 24 October, the council had unanimously adopted a decision  at his request that municipal government and local council resign en bloc, should the  community  be forced to have to perform a "marriage" of two homosexuals. It is known that the mayor will consult the abbot of the monastery before important decisions.
By the decision  proponents of "gay marriage" and Church opponents became aware of the small village. They have publicly called upon homosexuals to become "married" in the City Hall of the central French community  for the purpose of forcing the resignation of the "scandalous" the mayor with his "shocking" views. But so far, no one has undertaken to put this challenge into action. So Jacques Tissier and his Catholic council majority still administrate the tranquil ten and a half square kilometer site.

On 23 and 30   March, however, there will be local elections in France. The dismissal of the mayor was not successful and the prospect of a different majority do not seem to be very great. So Tissier's political opponents and the monks who have been constituted as "list of outraged", to  reduce the weight of the Catholics on the route of administration, by  denying monks the right to vote.

"We Have had Enough of the Catholic Robes"

The electoral  group "Outraged of  Fontgombault " claims that some of the monks are not eligible to vote. "The monks have been too long a political weight in our community. That has to change. We have had enough of the Catholic robes," says André Antigny, the leader of the "Outraged" in the anti-clerical tone, who competes as a mayoral candidate for his party. Six years ago, he had unsuccessfully challenged  Tissier. Now he is looking for another way. He turned to the court of Chateauroux and requesting the removal of monks from the voter lists Fontgombault.

The judges gave that the "outraged" Antigny was not entirely in the right, but ordered the deletion of ten monks anyway. At least four percent of the electorate. The measure was justified by the fact that these monks would no longer live in Fontgombault, but at the Abbey of Saint-Paul de Wisques. From the Abbey Fontgombault there have been five daughter houses founded because of the numerous growth in the past 40 years which created four abbeys and a priory. The Benedictine Abbey of Wisques is the latest foundation. To be precise, the Old Ritual monks of Fontgombault were asked by the monks of New Rite Wisques to take over the abbey, as their convent had a lack of  vocations and became too small.
The lawyer for the abbey Fontgombault appealed against the court's decision because the relocation of the monks to Wiques is not yet definitive. The revival of the local abbey is on 10 October 2013 is done, but the composition of the local new convention is not yet definitive. The monks are therefore still registered in the town Fontgombault.

"Monks Hinder the Laicism of our Community"

The "List of Outraged" emerged after the council decision of 24 October against "gay marriage" law.  It is the merger of the old Left and anti-Clericals of the village under a new name. Traditionally, there are two monks in the local council."That's only fair," says Mayor Tissier. "We attach great importance to this presence. The Abbey is a quarter of our community. Thus, the monks are underrepresented even significantly with two representatives, but 'Outraged" is of a completely different opinion.  Antigny: "The monks hinder the laicism [secularism] of our community."
The lawyer of the Abbey lodged an appeal with the Court of Cassation in Paris.   He received the reply: "The only objective of the 'Outraged' is to eliminate voters from the opposing camp. But that contradicts the letter and spirit of our democracy. "
Text: Giuseppe Nardi
image: Abbey de Fontgombault
Trans: Tancred vekron99@hotmail.com
Link to Katholisches....
AMGD
Posted by Tancred at 7:39 PM